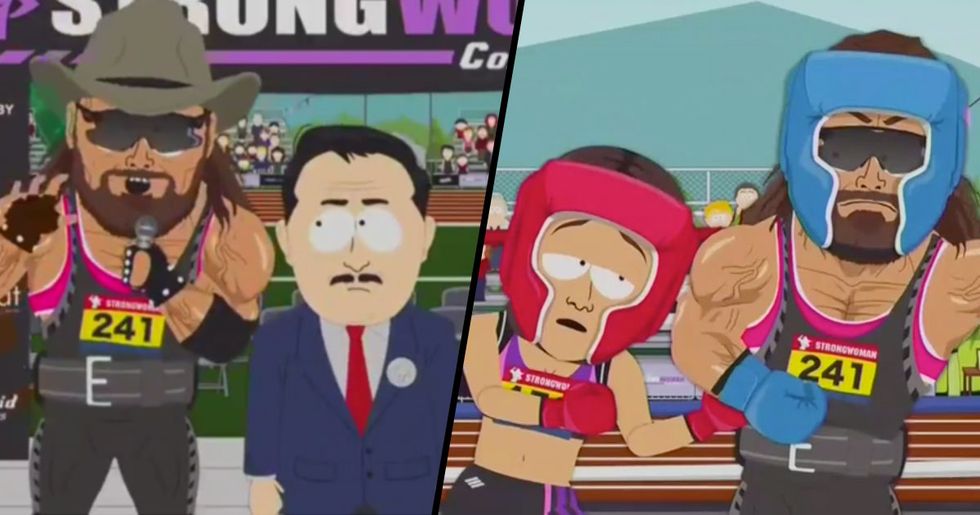 It never comes as a shock when South Park says or does something offensive.

The adult cartoon is well known for its hilarious, controversial, and often offensive humor, and this is what makes it so popular around the world.

It is probably impossible to count the number of times that the cartoon has offended someone or has made an extremely offensive joke. However, their most recent one is probably their most controversial.

They have poked fun and have completely roasted the transgender community by featuring a trans athlete in an episode.

They were in the same film class when attending the University of Colorado and both found the experience of standing on film sets extremely boring, so they would amuse one another by making silly voices.

The pair spent nearly a year goofing around until they thought about making a film of their own.

In an interview with Entertainment Weekly, Parker said: "We would always talk like these little kids and make each other laugh."

South Park is known for its DIY style...

Parker was inspired by his impressive cartoon debut at school about American history, in which he cut shapes out of paper and modeled them into characters. This would eventually be recreated and produced into animation for South Park.

It took a few years for the show to truly take off...

"The Spirit of Christmas" was one of the show's first aired episodes, and it was with the help of Hollywood legend, George Clooney, that it rocketed. Clooney reportedly made hundreds of VHS copies of the episode to sell to his friends as he was that much of a fan.

The show debuted in 1997 with pretty much no marketing at all...

The premiere got 899,000 viewers when it was predicted that it would be lucky to get 200,000. This was a complete shock to Parker and Stone as they didn't think that the show would last - but, now, South Park has released its twenty-third season.

The show has received numerous accolades...

This includes 5 Primetime Emmy Awards, a Peabody Award, an MTV Music Award, and has had numerous inclusions in various publications' lists of greatest TV shows.

South Park is one of the most popular cartoons on TV next to The Simpsons...

South Park is known to push the boundaries of what is, and what isn't acceptable to be shown on TV. This includes the issues of gun laws here in America. This was mentioned during an episode in season nineteen, in which a character named PC Principle went on to tackle everything from gun rights to the gentrification of South Park.

A lot of famous faces have appeared in the show... without consent, of course!

Celebrities get mocked constantly in South Park, including Sarah Jessica Parker, who was compared to a moose; Stephen Baldwin, whose drug addiction was made fun of; Justin Bieber, who was murdered; Britney Spears, who had another meltdown, and, of course, Michael Jackson (need we say more?).

Mr. Jefferson is portrayed as Michael Jackon in disguise, and the episode focuses on issues surrounding race and pedophilia.

So it comes as no shock that the show has received endless complaints...

The controversial nature of South Park has brought in complaints from around the world, ranging from concerned parents to celebrities, and world leaders.

A recent episode from season twenty-three also caused a stir...

"Band in China" has actually been banned from China completely, and so has the whole of South Park.

It basically rips into Hollywood filmmakers for trying to avoid Chinese censorship...

The episode took aim at the tendency in U.S. culture to adjust content to accommodate Chinese censorship laws. “It’s not worth living in a world where China controls my country’s art," says one character in the episode.

The storyline also follows dad, Randy, trying to smuggle pot into the country and ending up working in a Chinese work camp, alongside Winnie the Pooh, who is also banned in China after having been compared to President Xi Jinping.

According to InkStone News, as of the 7th October, all reviews for any of South Park's twenty-three seasons have been removed from the popular Chinese review site, Douban. Searches in both English and Chinese on the country's version of Facebook will come back with no results.

In typical Parker and Stone fashion, the creators issued an apology on Facebook, reading: "Like the NBA, we welcome the Chinese censors into our homes and into our hearts. We too love money more than freedom and democracy. Xi doesn't look like Winnie the Pooh at all. Tune into our 300th episode this Wednesday at 10! Long live the great Communist Party of China! May this autumn's sorghum harvest be bountiful! We good now China?"

It's pretty unlikely that China will back down...

But this certainly doesn't make China the first country to hold a grudge against South Park and, let's face it, it's not exactly going to phase Parker and Stone now, is it?

And as predicted, the comedic duo wasn't phased in the slightest.

Yet another episode from season twenty-three has caused even more outrage.

The episode is titled Board Girls...

And it revolves around the character Strong Woman (who is also the vice principal at the elementary school and partner of PC Principal, with whom she has the PC babies) entering a Strongwoman Competition, which she previously won.

Strong Woman is in good shape and is ready to compete in the all-female competition.

In the episode, she is asked by a sportscaster about how she feels about the trans woman competing alongside her, to which she responds, "I feel honored to be a part of history, I have a lot of incredible trans friends who are athletes, so we are all inspired that this woman is competing."

The term "average trans athlete" is rather problematic...

"Well, what is an average trans athlete? Honestly, I find that quite bigoted, David," Strong Woman replies in annoyance.

The sportscaster goes on to bring Heather Swanson into the interview...

And when she walks into the camera shot, the joke is clear.

Heather's character is clearly inspired by the late Randy Savage...

Heather goes on to say, "I'm not here to talk about my transition, I'm here to kick some f****** a**," and "I'm gonna roll up the other women here, and I’m gonna smoke 'em. I am the strongest woman this state has ever seen," after being asked if it was true that she began identifying as a woman only 2 weeks ago.

Heather goes on to fiercely compete against the other female athletes.

The episode shows the other women competing against Heather, and it's safe to say that they get completely crushed by her in the different games, such as wrestling and shotput.

But the episode has an unexpected ending...

In the end, Heather, who claimed to be unstoppable, is defeated by some of the elementary school girls who formed a board game club after the boys at the school complained and had them removed from their game club.

The sexism begins to get worse...

Heather says the competition against the girls was not fair because she was born a man, which means she does not read the board game directions beforehand like she says women do, so she was at a disadvantage. Cartman then invites Heather to join the boy's club.

Because South Park is so popular...

There are many out there who found the episode funny and felt it was delivering an accurate message about the current debates about trans athletes.

British TV host Piers Morgan even had his say on the episode...

"Bitingly sharp... and brutally honest. Women's sport is going to be destroyed unless authorities deal with this issue asap," he wrote.

But, of course, many were offended.

A lot of people feel the episode is tasteless, transphobic, misogynistic, and just overall, offensive.

McKinnon, who has made headlines recently in regards to her "unfair" abilities as a trans athlete, said on Twitter, "I'm not particularly mad about the South Park episode." "Yes, it's transphobic. Yes, it's lazy. Yes, it contributes to harm to trans women and girls. But they're lazy and increasingly irrelevant. F***, Futurama made the same stupid storyline in 2003. Transphobes don't have new jokes."

McKinnon also went to say that Parker and Stone are transphobes...

It's an extremely difficult situation. The episode doesn't necessarily mean that Parker and Stone are transphobic, and many have argued that the episode is proving a very valid issue that the sporting world is currently dealing with. But it is clearly offensive to the transgender community, and it is never acceptable to make fun of somebody for the way they identify.