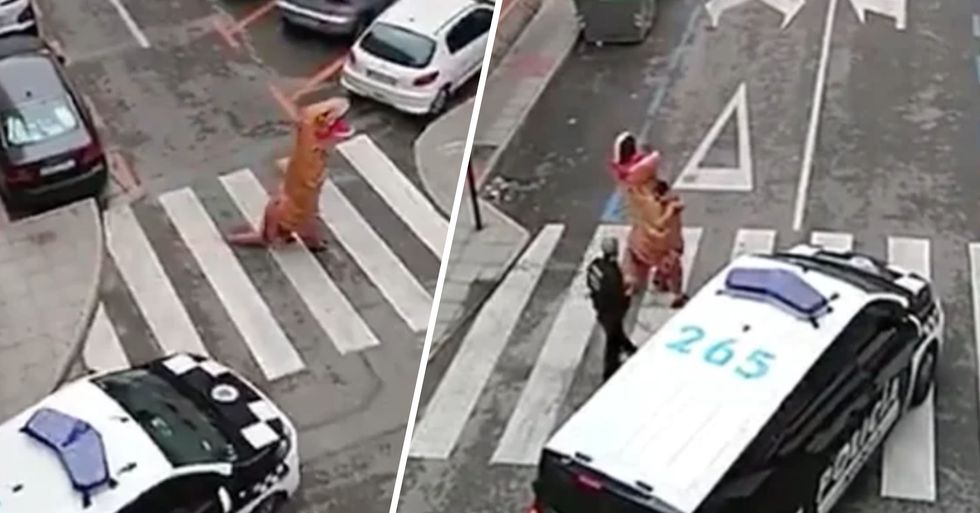 Many countries around the world have been quarantining their locals, but in typical human nature, many have been poking fun at the whole situation.

Keep scrolling to see a "rogue dinosaur" roaming the quarantined streets of Murcia in Spain...

It has been confirmed by Worldometer that 8,012 people have now died globally, with the majority being in mainland China. A further 202,270 have been found to carry the virus and be infected.

Many other countries in Europe have been following Italy's lead...

And it's clear that the panic and worry is mounting.

But because of human nature...

Many people around the world have managed to make light of this dire situation and this has cheered up a lot of the down-hearted.

And it comes from Murcia in Spain, which is currently being quarantined.

The entire country is currently on lockdown...

Citizens have been told to remain in their homes, leaving only to purchase essentials, such as food and medical supplies.

He said, "The government of Spain will protect all its citizens and will guarantee the right life conditions to slow the pandemic with as little inconvenience as possible."

The streets of Murcia are seen to be deserted...

Apart from one person wearing a dinosaur suit... which is something you don't see every day!

The dinosaur, who is unidentified, was seen casually strolling through the neighborhood.

A police car is then seen to approach the comical character and officers in the car begin to scald the prankster.

Although it cannot be heard what the officer is saying to the dino...

It is clear that they are getting a pretty firm telling off for wandering the quarantined streets.

Although this must have been very amusing for residents to see...

Some people still aren't realizing the importance of social restrictions and self-isolation.

And keep scrolling to learn about the brothers who hoarded 17,000 bottles of hand sanitizer amidst the coronavirus panic...