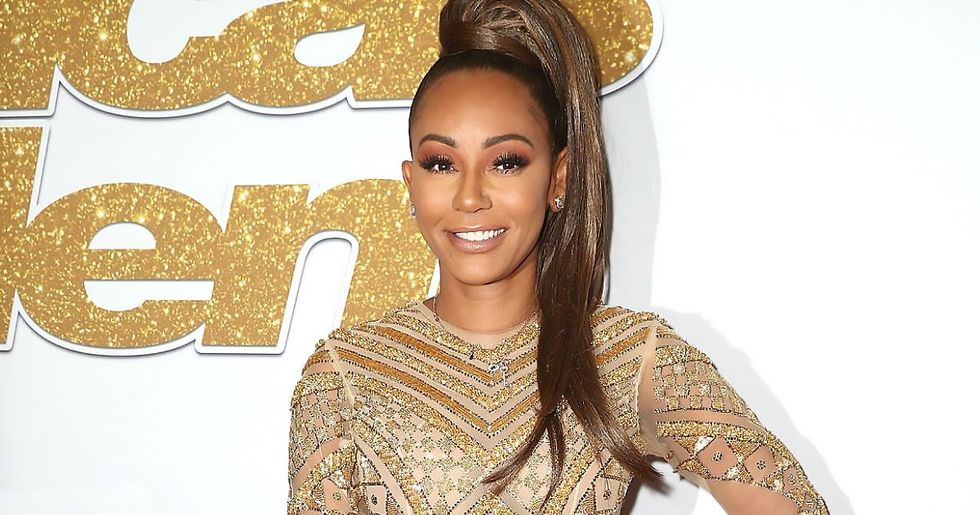 Since the mid-'90s, they've been singing about relationships and spicing up your life and zigazig ahs (still not sure what that one meant) for their fans all over the world. A lot of Millennials have a ton of affection and nostalgia for the girl group since the Spice Girls phenomena was an enormous part of the '90s.

But since then, the Spice Girls haven't had a huge role in pop culture. Every once in a while, you hear about a reunion tour or bitter feud, but it's not like we're constantly refreshing Twitter for Spice news, right?

That's why it was surprising to see the news that Melanie Brown, Scary Spice herself, was hospitalized because she temporarily went blind in one eye making the rounds on social media. The news was a real shock, and it hit the internet hard. For a band so far out of the zeitgeist, it sure seems like there's still a lot of affection for the Spice Girls.

We have a theory as to why that might be the case. Keep reading to find out why...

The Spice Girls are icons of Girl Power.

When the Spice Girls talked about their overriding philosophy of Girl Power, it always seemed genuine. This stood in stark contrast to the bands that would follow them who were clearly saying whatever the marketing machine demanded of them. For instance, we all know N*Sync never really believed it was gonna be them.

The Spice Girls had an important message in a time when there weren't a lot of strong female role models.

How many little girls grew up with the Spice Girls telling them they were powerful and that they should be proud to be a girl? That's incredibly important to hear.

(Things have since gotten a liiiiiiiiittle bit better.)

But there's a danger for performers in becoming as popular across the world as the Spice Girls.

Sure, it might seem great to have hundreds of thousands of people love you, but there is a dark side (besides just getting startled when a fan sees them on the street and screams).

Their fans tend to forget that they're people...

See? Just a bunch of regular folks looking into a camera, waving and being best friends.

But real quick, didn't it always seem like the Spice Girls were working super hard to become THE pop icons in the UK? Like, they loved the UK a lot, right? You don't see American bands flaunting their American-ness like this, do you? Maybe country music singers. Is pop music the UK's version of country music in the United States? I'm thinking about this too much. Let's move on.

The Spice Girls, like Batman before them, became a symbol.

They were less "elemental" and "terrifying" and more "empowering," but you get the idea — the Spice Girls became avatars for an idea.

You can imagine, then, how shocking it is to see Mel B, Scary Spice herself, announce she had gone blind in one eye (temporarily, thank god).

Icons don't deal with petty human problems like getting sick. They deal with icon problems like how best to inspire a city to rise up against the mob that has held them in its grasp for so long; for too long.

The Spice Girl went to the hospital when her right eye just... stopped seeing.

She was diagnosed with iritis and uveitis, both forms of inflammation. And while that sounds very serious, can we just take a minute to ask — "Iritis?" Like, arthritis of the eye? Little on the nose. Maybe whoever named that disease needed to give it a second draft.

A source talking to People said this happened because Mel B has herpes in her eye.

While it is super awkward discussing herpes, People made clear that, "according to The Ocular Immunology and Uveitis Foundation, the 'vast majority of instances of herpes infection of the eye are from type 1 herpes simplex virus, the type of herpes virus that causes fever blisters and cold sores' and is not associated with the sexually transmitted disease.)"

People's source said this wasn't the first time Mel B had issues with her eye...

“This has happened before," the apparently well-connected source told People. "She has herpes in her eye, so this can happen." That would be good, right? If Mel B had dealt with this before, it would mean she'd gotten over it before too.

... but Mel disputes that notion.

On her Instagram, Mel wrote, “Just to be clear I was NOT ok and this has NEVER EVER happened to me before." Whatever happened to Mel B's eye, it sounds like it could be more serious than a temporary flare-up.

Mel received treatment and got back to work rehearsing for the upcoming Spice Girls reunion tour.

The Sun is reporting that Mel left the hospital "against doctor’s orders" to continue rehearsing for the Spice World Tour. And if I do say so, she rocks the eye patch look.

And it's good she has friends with her.

You have to imagine it's comforting in times of stress to have three of the only other people in the world who understand your life. Who else can really speak to what it's like to be a Spice Girl?

Minus Victoria Beckham, which is a bummer.

The Spice Girls should be together all the time. It doesn't feel right without all of them there. Like, imagine if one of the main Avengers was missing in action during a core Avengers movie. Although, I guess that did kind of happen in Civil War when Thor and Hulk were just missing. And Ant-Man and Hawkeye went unaccounted for in Infinity War. I'm thinking about this too much. Let's move on.

It must've been terrifying for Mel B to wake up without her eyesight.

Our bodies are so weird! They just do things sometimes! How can you just be hanging out, seeing stuff, when all of a sudden, it just stops? You have to wonder if it's ever going to come back! And why did it happen? Why did she get iritis and uveitis?

We know so little about our bodies.

Literally anything can grow on it, and anything can just stop working. And then you go to the doctor to ask what's happening, and sometimes even they don't know! They just prescribe you a steroid and hope for the best!

And we'll just never know why!

Bodies are nuts, man. I just... I don't know. they're just totally nuts.

In any event, it sounds like the Spice Girls reunion show, entitled "Spice World," is still on.

It's set to begin this weekend in Dublin, Ireland. Why not the UK? Do the 2019 Spice Girls not care about the UK as much as the 1996 Spice Girls did?

But still, this story was scary.

I mean, yes, it was about Scary, but that wasn't about making a pun. It is literally scary. With a lower case "s."

And there is a reason this story is more just "celebrity gets sick and now they're not sick anymore."

It doesn't always make news when a celebrity gets sick. You have to imagine celebrities get sick every day. I feel like Jake Gyllenhaal is sick most days, to be honest. He just strikes me as someone with a weak constitution.

The Spice Girls meant a lot to people.

Look at all that Spice Girls memorabilia! Not every band inspires that kind of devotion. There's something special about them.

They were indelible symbols.

Again, to so many of us '90s babies, the Spice Girls were embodiment of an idea that a lot of people, not just girls, needed to hear. That elevated them in so many of our eyes.

So it's really horrible to see one of them become... uh... delible.

You never really expect to hear that something bad happened to a Spice Girl. It just... doesn't enter your mind. Unlike Jake Gyllenhall, who surprises me every day I don't read a story on TMZ about him falling in the shower and breaking a hip. He just seems so frail.

And while we of course wish Mel B well as she recovers...

There's no official word as to whether or not Mel B will be performing in Spice World with a patch over her eye, but if she does, you have to assume it'll be fierce as hell.

It's important to remember that the Spice Girls are just people.

The Spice Girls are flesh-and-blood human beings. I know it seems like the idea of the Spice Girls will always be around, and maybe it will. But the girls themselves? They won't.

At some point, they'll be too old to dance...

That will be a loss, as no one has ever been as good at snapping their heads to the right simultaneously while being all sassy.

And that will truly be a loss, because without the Spice Girls, the phrase "zigazig ah" may fade into oblivion.

... too angry at each other to get drunk and laugh it on out.

And that might already be happening! Mel B and Geri Horner, AKA Ginger Spice, are sort of feuding about whether or not they had sex together. Hopefully, they'll figure it out.

At some point, the Spice Girls, too, will fall.

And we're just going to have to reckon with that. (And yes, I know the Spice Girls already fell before, when they broke up the first time and put out "Goodbye," but dammit, it's still sad and weird every time.)