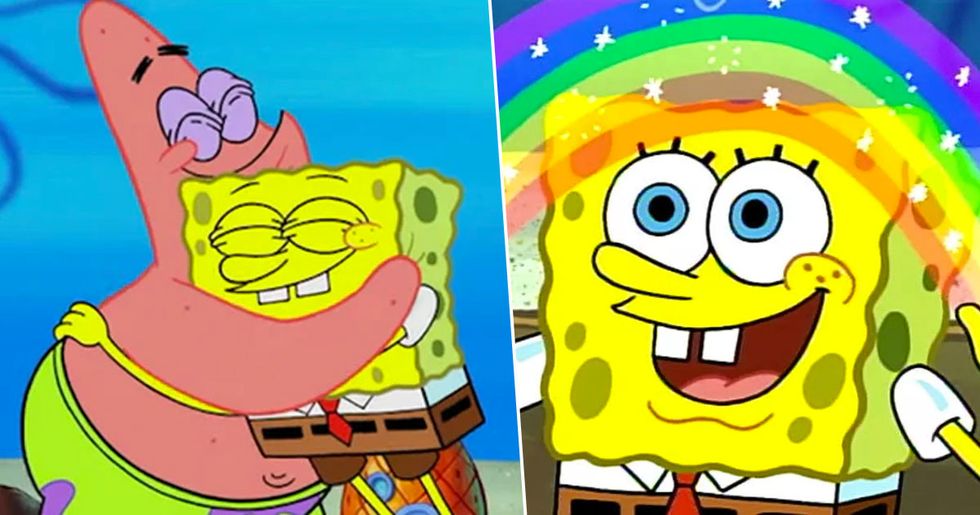 Everyone (or almost everyone) knows and loves SpongeBob, the shapely, yellow sea sponge known for his upbeat attitude. Kids and adults have been delighted by SpongeBob for years.

I remember him well. The happy little sponge in a pineapple under the sea. SpongeBob was an innocent and harmless creature bringing nothing but joy to the world.

But one person thinks otherwise. And no, it isn't Plankton or Squidward, it's University of Washington professor, Holly M Barker, and she believes SpongeBob is a violent, racist, colonizer. Oh boy.

Read on to learn more about SpongeBob and Barker's bizarre theory.

SpongeBob debuted on Nickelodeon on May 1st of 1999 and has run for an impressive 250 episodes since then.

The enduring fame of SpongeBob shocked many. It became an instant hit with kids, but the show's sneaky, subversive adult humor made it watchable for parents. And then a funny thing happened.

They hit it big on the Internet.

From GIFs, to memes, to Reddit and Tumblr conspiracy theories, young people have picked SpongeBob as a beacon and injected him into popular culture via social media. The thing is.... it works. Have you ever needed a meme to describe a weird feeling? Well, there's a SpongeBob meme for that.

The show, which was the fifth longest running in US TV history, follows a group of friends, and enemies, in the fictional town of Bikini Bottom - somewhere 'under the sea' in the Pacific Ocean.

This trio are the most central characters to the shows plot, which aims to educate young people while keeping them laughing and entertained. But there's also the underwater squirrel, Sandy, and of course Mr Krabbs and his rivalry with Plankton over the secret ingredient to the Krabby Patty.

Hillenburg began his animation career in 1987, studying Experimental Animation at the California Institute of Arts in Valencia before he earned his Master of Fine Arts in 1992. From there, he began winning awards and became a director and writer on Nickelodeon’s Rocko’s Modern Life, before he began working full-time on writing, producing and directing the animated series that would eventually become SpongeBob SquarePants.

At the time Nickelodeon released the following statement, according to Variety:

The characters from The Intertidal Zone comic eventually became the concepts that formed SpongeBob SquarePants. So before we go on, let us thank the late, great Stephen Hillenburg for his brilliant creative mind, wicked sense of humor, and desire to teach children about marine life!

After reading this, it's hard to imagine SpongeBob is 'bad'.

So what could possibly be bad about SpongeBob? A lighthearted educational and entertaining show for kids? A show with slight innuendos that make it just as hilarious for adults? A show based on Hillenburg's fascination with the sea? Surely there's nothing controversial here.

Enter Holly M. Barker, a professor from the University of Washington who has slammed SpongeBob as a 'violent', 'racist', colonizer, according to Fox News.

In the article called, Unsettling SpongeBob and the Legacies of Violence on Bikini Bottom’s abstract, Barker writes:

SpongeBob Squarepants and his friends play a role in normalizing the settler colonial takings of Indigenous lands while erasing the ancestral Bikinian people from their nonfictional homeland.

This article exposes the complicity of popular culture in maintaining American military hegemonies in Oceania while amplifying the enduring indigeneity (Kauanui 2016) of the Marshallese people, who maintain deeply spiritual and historical connections to land—even land they cannot occupy due to residual radiation contamination from US nuclear weapons testing—through a range of cultural practices, including language, song, and weaving. This article also considers the gendered violence of nuclear colonialism and the resilience of Marshallese women.

SpongeBob’s presence on Bikini Bottom continues the violent and racist expulsion of Indigenous peoples from their lands (and in this case their cosmos) that enables U.S. hegemonic powers to extend their military and colonial interests in the postwar era.

Barker adds that SpongeBob plays a part in cultural appropriation.

She claims that the use of pineapples, Easter Island statues, and Hawaiian shirts, plays a part in the cultural appropriation of 'iconic Pacific Island representations'. It's a cartoon. Jeez.

Even the song is bugging her.

The first act of the song is to have children identify who resides in the pineapple house. The children’s response repeated extensively throughout the song, affirms that the house and Bikini Bottom are the domain of SpongeBob. The song’s directives, ensconced in humor, provide the viewer with an active role in defining Bikini Bottom as a place of nonsense, as the audience is instructed ‘If nautical nonsense be something you wish…drop on the deck and flop like a fish.’

Although she does state, the creator's most likely didn't intend this.

Barker agrees that the show's creators wouldn't have had all of this in mind when producing the kids' show - however she does call it 'disturbing' that they did not realize that ‘Bikini Bottom and Bikini Atoll were not theirs for the taking'.

Her conclusion to the article...

We should be uncomfortable with a hamburger-loving American community’s occupation of Bikini’s lagoon and the ways that it erodes every aspect of sovereignty.

I am very much against racism, violence, and colonialism. But for the sake of God, it's a program about a sponge who lives under the sea with his mates. It's not a Netflix doc. Some people have way too much time on their hands.