The show was created by Steven Hillenburg. | 22 Words 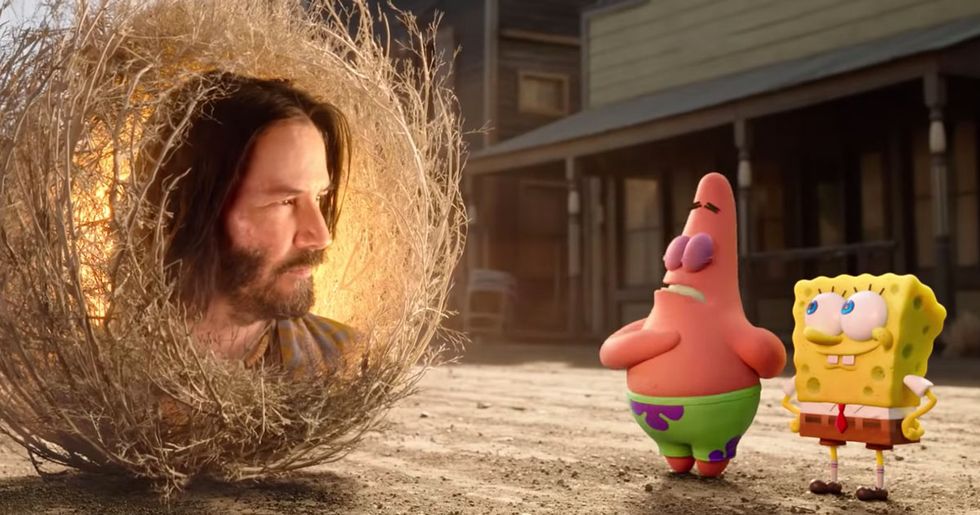 The underwater world of Bikini Bottom is set to be hitting the big screen again...

Spongebob Squarepants is one of the most famed kids shows of our time. With over 2 decades of air time and two-hundred episodes under its belt, it's gone on to secure quite a significant fanbase. As you'd imagine for such a popular show, it had its fair-share of big-screen time, and it looks like once again, SpongeBob and Co will be returning to theatres... this time in a brand new movie named "The SpongeBob Movie: Sponge on the Run."

And if the news of seeing the gang in a newly 3D animated form is already exciting to you, it's about to get even better... the one and only internet sweetheart, Keanu Reeves will be making a cameo in the movie.

How would an encounter between Spongebob and Keanu Reeves play out? Well, keep scrolling to see the official trailer and find out for yourself.

Spongebob Squareparents is one of the most famous kids shows on television.

We don't know about you, but tuning in to watch the drama of Bikini Bottom unfold pretty much sums up our entire childhoods.

And who can forget the iconic title sequence?

It's pretty much ingrained in our heads...

The show made its small screen debut on Nickelodeon on May 1st of 1999.

The popular cartoon has run for an impressive 250 episodes since then.

The enduring fame of SpongeBob shocked many. It became an instant hit with kids, but the show’s sneaky, subversive adult humor also made it watchable for parents. It was a win-win for moms and dads everywhere.

Impressively, Spongebob was the fifth longest-running show in US TV history.

Set in the fictional town of Bikini Bottom – somewhere ‘under the sea’ in the Pacific Ocean, the show follows a group of friends, and enemies.

This trio are the most central characters to the show's plot, which aims to educate young people while keeping them laughing and entertained. But there’s also the underwater squirrel, Sandy, and of course Mr Krabbs and his rivalry with Plankton over the secret ingredient to the famed Krabby Patty.

Hillenburg began his animation career in 1987, studying Experimental Animation at the California Institute of Arts in Valencia before he earned his Master of Fine Arts in 1992. From there, he began winning awards and became a director and writer on Nickelodeon’s Rocko’s Modern Life, before he began working full-time on writing, producing and directing the animated series that would eventually become SpongeBob SquarePants. Sadly, he tragically passed away last year, aged 57.

Given the renowned success of Hillenburg's creation, it was only a matter of time before it got the big-screen treatment.

Bikini Bottom first made its box office debut in 2004 with aptly named The SpongeBob Squarepants Movie. The movie was a hit, grossing an impressive $140 million in global revenue.

Spongebob and the gang returned to the big screen in 2015.

The Spongebob Movie: Sponge Out of Water hoped to give the franchise a boost and it certainly did the trick, taking home a respectable $323 million at the global box office. It also showcased Spongebob and Co in a newly re-vamped 3D animated form.

And now it looks like the gang are getting a third movie.

Production on The SpongeBob Movie: Sponge on the Run was confirmed to have begun in January this year and just like its predecessors, the film will include live-action sequences.

The movie is set before the events of the television series...

According to the movie's synopsis, the 3D animated spectacle will follow SpongeBob as he seeks to find the Lost City of Atlantic City after his pet snail, Gary, is kidnapped and taken there.

The trailer for the upcoming movie just dropped.

And, much to the shock of fans, featured a cameo from the internet's sweetheart himself... Keanu Reeves.

You're probably thinking "How does Keanu Reeves fit in with Spongebob Squarepants?"

Well, it's certainly mind-boggling, but it's a cameo we won't be complaining about. The beloved actor (or at least his head, anyway) appears in the trailer as a wise sage. Yep. "I'm made out of sage and I am a sage, so it works out pretty well," he declares.

Alongside the John Wick actor, the movie will also include the voice of Awkwafina.

The cast is looking to be shaping up nicely!

The SpongeBob Movie: Sponge on the Run is set to hit theatres on May 22, 2020. Want to know more about why everyone loves Keanu Reeves so much? Keep scrolling.