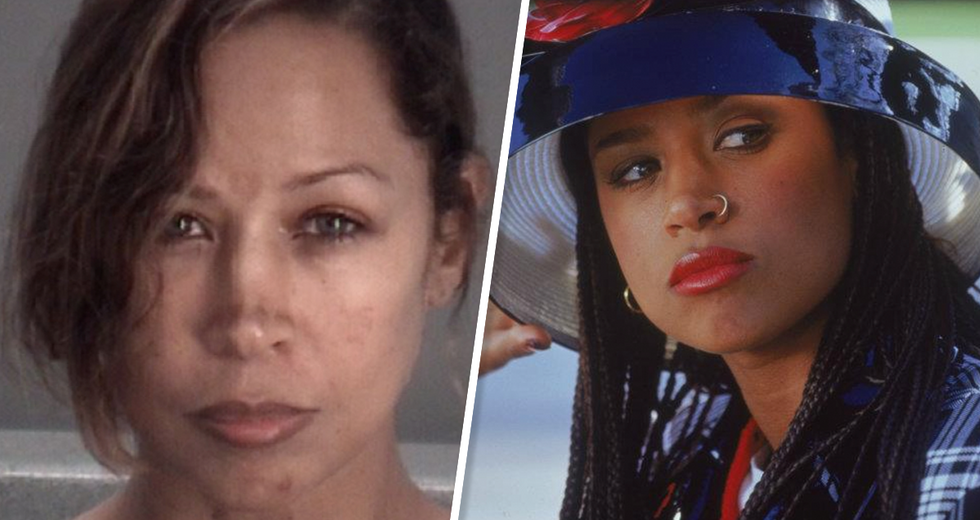 Stacey Dash, most famous for portraying Dionne in the film and subsequent television versions of Clueless and then later for her divisive political views, was arrested for domestic violence this past weekend in Florida.

What exactly happened between the "As if!" days and now?

Dionne was Cher Horowitz's best friend in the classic '90s teen rom-com, Clueless, which also starred Alicia Silverstone, Brittany Murphy, Jeremy Sisto, Paul Rudd, Wallace Shawn, and Donald Faison. Dionne was known for having an on-again-off-again relationship with her boyfriend, Murray, played by Faison, and for being a total fashionista. Oh, and for almost getting all her friends killed while driving on the freeway that one time.

Many older actors play high schoolers in movies and on TV, but Dash was much older than her co-stars...

According to Thought Catalog, "Donald Faison, Jeremy Sisto and Breckin Meyer were all 21 at the time of the release. Alicia Silverstone and Brittany Murphy were 18, and Murphy actually was the virgin who couldn’t drive. However, Stacey Dash was 28, making her more than a decade older than her character." In the movie, it feels totally natural for Cher and Dionne to be best friends, but it's strange to think that Dash was an entire decade older than her co-star, who was actually of high school age.

After the show ended, Dash appeared in a number of other film and television roles, but none of them made the same splash that Clueless had. And that's when she started speaking out politically...

In 2012, Dash, who had previously voted for Democratic candidate-turned-president Barack Obama, suddenly became a Republican.

Dash supported Republican candidate Mitt Romney. In 2016, she released a book called There Goes My Social Life: From Clueless to Conservative. Soon after, Dash ranted to ET! about transgender people, claiming gender was a choice, saying, "It's tyranny by the minority. Why do I have to suffer because you can't decide what you wanna be that day? It's your body! So, it's your decision, right? We all make choices." Apparently, she hadn't raised enough eyebrows yet, because soon after she claimed that the trans rights movement "infringed upon her rights too much."

When asked if trans people should be able to use all-gender restrooms, she told a reporter, "OK, then go in the bushes. I don't know what to tell you, but I'm not gonna put my child's life at risk because you want to change a law. So that you can be comfortable with your beliefs -- which means I have to change my beliefs and my rights? No." Yikes. That is wrong on so many levels.

In 2018, she decided to run in California's 44th congressional district in the 2018 Congressional Election as a Republican, claiming she was going to "free people from the shackles of a plantation mentality," per The Guardian. On March 30th of that year, Dash withdrew from the race. So, suffice it to say, her political career wasn't on the fast track to success.

And now she's been arrested for domestic violence.

Dash, now 52 years old, was arrested this Sunday at her home in Pasco County, Florida after getting into an altercation with her new husband, lawyer Jeffrey Marty. Dash and Marty apparently married 1 year ago, just 10 days after meeting. They share a love of Donald Trump and conservative values. He is her fourth husband.

It doesn't look good for Dash.

According to TMZ, "We're told cops were called to a home around 7:45 PM to respond to a domestic dispute between Stacey and Jeff. Our sources say Stacey allegedly pushed and slapped him and that's when officers arrived ... they saw scratches on his left arm." After this, Dash was taken into custody where she's being held on $500 bail. Learning to see the signs of an abusive relationship can save a life. Keep reading to learn the 30 signs you may be in a toxic relationship, and how to get out.