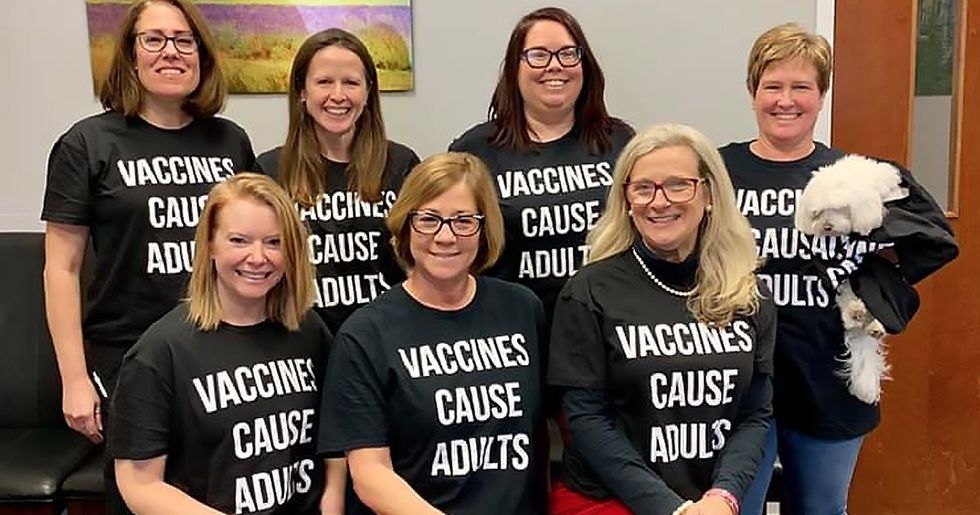 For most, vaccinations are considered just another routine medical treatment. Like bi-annual teeth cleanings and routine physicals, vaccinations are preventive maintenance that helps humans avoid the deadly diseases that once demolished entire populations with their rapidly spreading contagions and high fatality rates. The development of cures for these illnesses enabled unprecedented population growth, longer lifespans, and healthier, happier populations. For most people, vaccinations are a 21st-century blessing. For others, they’re public enemy number one.

Unfortunately, an increasing fraction of paranoid parents believe that vaccinations don’t prevent diseases, but instead actually cause them. Many so-called anti-vaxxers refuse to vaccinate their children, claiming they are asserting their liberties and protecting their families from suffering disabilities and autism.

In their fight against the diseases they believe vaccinations cause, these fringe groups are actually fostering a resurgence of illnesses previously quelled by vaccination cures.  Fed up with their irresponsible spread of misinformation, one pediatric office is speaking out against the anti-vax movement online with a pretty cheeky T-shirt.

Vaccines are a medical marvel.

The first vaccine is said to have been invented in 1796 when Edward Jenner successfully inoculated a 13-year-old boy against smallpox. Since then, they’ve really changed society for the better. Smallpox was successfully eradicated over the 18th and 19th through the widespread use of Jenner’s vaccine.
Vaccines have cured a range of once debilitating diseases. Further vaccine experimentation went on to cure cholera, the plague, and many bacterial diseases into the early 1900s.
The cures enabled populations to thrive like never before. The mass polio immunizations of the 1950s-1980s have essentially disappeared the once deadly disease and allowed people to live longer, healthier lives around the world.

Despite clear evidence of its many benefits, some are suspicious of vaccines.

In the 1980s vaccine companies faced litigation that led to many shutting down as a result of criticism from fringe groups.

In recent years, the Internet has enabled the perspectives of “anti-vaxxers" to spread like a contagious disease.

Many people now believe vaccines are harmful for children, and can increase the risk of things like autism.

Vocal anti-vax celebrities have also turned many against the cures.

Actors like Jenna Elfman, Jenny McCarthy, Jim Carrey, Alicia Silverstone, Charlie Sheen, and others are famously opposed to vaccination and have contributed heavily to the dialogue around its discontinuation.

This spread of misinformation has led many parents to refuse inoculation for their children.

Most schools require students to be vaccinated before they attend to ensure campus health and safety, but the anti-vax movement has challenged this standard or withheld their children from public institutions.

The unfortunate trend is actually causing a return of previously cured diseases.

New York, Texas, and Washington State have all seen measles outbreaks this year.

The disease is highly contagious.

Measles is an airborne virus that is easily spread through coughing and sneezing. The outbreak has led to 34 cases in Clark County Oregon. 30 of the patients had not been immunized.

Washington Governor Jay Inslee declared a state of emergency after the state saw two dozen confirmed cases of the once eradicated disease.

With the disease threatening populations once again, a few local physicians in Monroe County, New York decided to take a stand.

The phrase on the T-shirts in question is a play on a well-known anti-vax motto, “Vaccines Cause Autism." The photo features seven staff members wearing the T-shirts, and was posted with the caption. “Vaccines. Save. Lives."

The physicians are tired of seeing misinformation spread online.

“It’s kind of a play on vaccines cause autism, which they do not. They cause adults," said Kate Shand, PA at Legacy Pediatrics. “Healthy kids get vaccinated and grow into adulthood and be healthy adults."

The Legacy Pediatrics practice staff members donned T-shirts with an anti-anti-vax message, and posted a group photo to Facebook.

The T-shirts’ simple, powerful message was inspired by a meme one of the physician’s assistants had seen on online.

They hoped their act would begin a pro-vaccine movement.

With so much powerful vitriol against vaccines, Legacy Pediatrics wanted to offer a rebuttal in favor of the cures via their T-shirts.

The Staff at a Pediatrician's Office Wore Cheeky Pro-Vaccine Shirts, and We Are SO on Board - The staff at Legacy P… https://t.co/OGpWlnK0Kf
— effinfun (@effinfun)1550907077.0

Bill Kingston, the owner of a local T-shirt company called Crazy Dog T-Shirts in Rochester, NY, decided to print the shirts for free when he realized the cause he would be supporting.

The office says reactions to the now-viral photo have been mostly positive, despite the strong online opposition to their message.

However, there has been controversy surrounding the post as well.

The post has also gone viral among large anti-vax groups, who have bombarded the office’s Facebook page with anti-vaccination comments.

Many commenters were outraged and downright mean.

Stories about vaccinations that had led to illness among loved ones abounded, with no scientific facts to support the arguments.

They were clearly misinformed.

The argument that a team of doctors has not researched vaccines is not a strong one.

Some argued they had never been vaccinated and were fine.

The take is a purely circumstantial – and their circumstances are at risk of changing with the recent proliferation of curable diseases.

Of course, many also came out in support.

While the overwhelming online response was negative, some were brave enough to voice their support of the office.

The office is surprised the photo is getting this much attention.

Legacy Pediatric physicians have said they’re disappointed to see so much hate being directed toward their page, but are glad the post is starting a dialogue.

Ultimately the pictured physicians, and many like them, just want people to understand the facts about vaccination.

The truth about vaccinations is widely available but isn’t spread with as much fervor as the messages coming out of the anti-vax movement.

Pro-vaxxers are backed by facts.

“Vaccine-hesitant” describes parents who delay or opt out of vaccinations for their kids. The World Health Organiza… https://t.co/MTtdf0QnIs
— Toronto Star (@Toronto Star)1550437504.0

The backlash against vaccines has become so severe that the World Health Organization has named the anti-vax movement one of its top ten threats to global health in 2019.

The consequences of an unvaccinated population are dire.

The Center for Disease Control and Prevention reports that one in ten children with measles will get an ear infection that can cause permanent deafness. One or two in every 1,000 children will die from the disease.

The risks are very real.

There are more than a few problems with the anti-vax movement, including an arguably ableist view of people with autism and disabilities. But their greatest danger by far is in their potential to reignite the mass spread of previously cured diseases.

It’s a small comfort to see that the T-shirts are selling.

The popularity of the photo and T-shirt sales suggests that a pro-vax movement could be growing.

Proceeds from T-shirt sales will be donated.

Legacy Pediatrics and Crazy Dog T-Shirts will be sending the funds to countries with limited vaccine access.