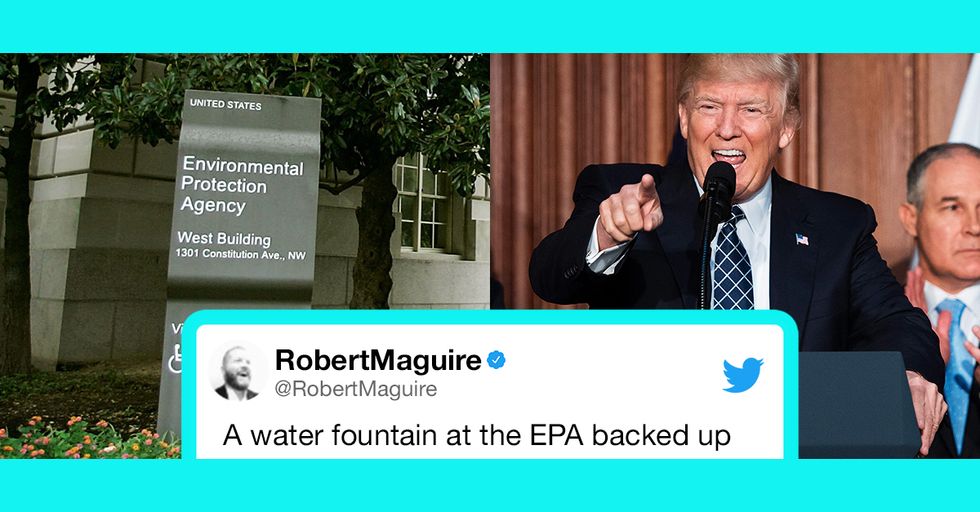 The end of the world is nigh!

Well, okay, maybe not nigh, but pretty darned close, according to scientists. Not to worry you or anything, but the world is warming, climates are changing, polar ice caps are melting and the polar bears – well, long story short, they're looking mad thin these days.

In fact, just this month, the world was shocked by a National Geographic video of a starving polar bear "just hours away from death." The poor thing was pawing at a garbage dump in an abandoned fishing camp on Baffin Island and was so exhausted it could barely stand.
Steven Amstrup, the chief scientist for the conservation group Polar Bears International explained to NPR that "polar bears rely on sea ice surface to catch their food, principally two species of seals, and that food found on land is insufficient to feed them."
So, to recap – polar bears are dying, the sea ice is melting, and we're pretty well on our way to a fiery hell of our own making. Oh, and our oceans? They're getting clogged with garbage islands and immortal jellyfish (no, seriously).

And just what does our nation's government, the government that leads the greatest country in the world, have to say about this outrage? Well, that's where it gets complicated.
See, the United States government doesn't really believe in climate change anymore even though "the average temperature in the United States has risen rapidly and drastically since 1980, and recent decades have been the warmest of the past 1,500 years..." In fact, Donald Trump took climate change off the list of threats to national security, and even once tweeted, "It's freezing and snowing in New York--we need global warming!" It's so bad, the gods of climate are fighting back... or at least a faulty pipe is.
The Environmental Protection Agency (EPA) has been through a lot in the past year.  There's the threatened budget cut for the 2018 fiscal year, the noted climate change denier, Scott Pruitt, who Trump appointed to head it and also the fact that many of the agency's major scientists were fired because science bad, oil good.
Then, there's the water fountains. Employees at the EPA have always been leery of the water fountains, which are not the most well maintained conveniences, to say the least. "Sometimes there were some very odd smells coming out of those drinking fountains," one unnamed former staffer said. "I can't imagine that anyone would actually drink out of those drinking water fountains. I think I used it to pour my coffee down."
Turns out, he and his colleagues were right to be worried. Last week, EPA staffers were taken by surprise (and disgust) when one of the water fountains started spewing raw sewage. Vice explains, "[The staffers] got an email at about 9 AM letting them know that there was a "water line back up" causing an "issue" with the fountains. According to the folks inside, "issue" was an understatement."

Dan Becker, the director of the Safe Climate Campaign explained that "A sewer problem at EPA HQ has resulted in poop exploding out of water fountains." Interestingly enough, it exploded outside the EPA's Office of Policy, which is a hallway near noted climate change denier and EPA administrator Scott Pruitt's office. A few other nearby fountains also overflowed and the odor aromatized nearby offices, as it were.
Not to be flippant and all, but if there's one visual metaphor for the dung-ridden carcass that is 2017, it's literal poop flowing out a fountain at the freaking Environmental Protection Agency. As they say, God warns us in mysterious ways – sometimes even through a poopy water fountain.