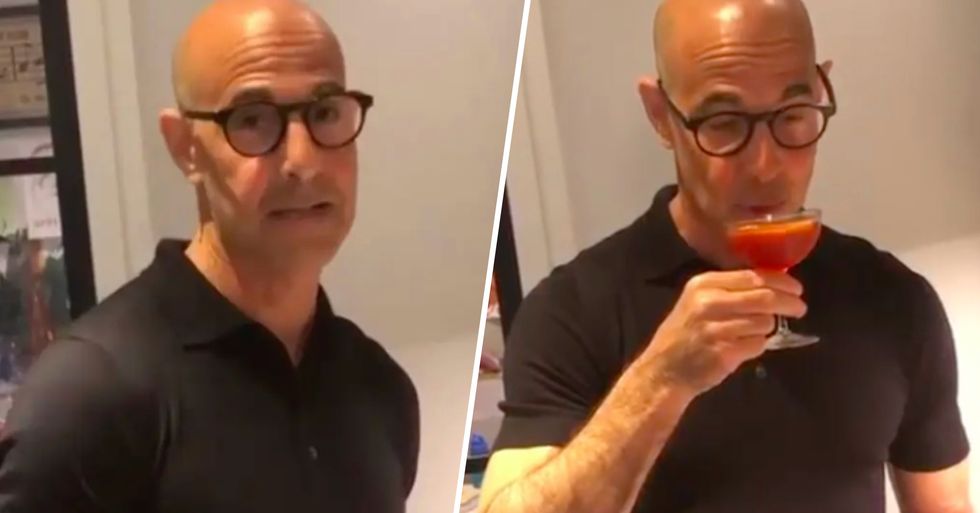 It's safe to say that we are currently all feeling the constraints of the virus. But while we're all stuck in self-isolation, celebrities are helping us keep entertained.

From thoughtful live streams to full-blown concerts, we've compiled a list of some of the best ways celebrities have kept our attention off the current pandemic.

And Stanley Tucci's cocktail lesson might just be the best attempt yet.

The actor and musician recently posted this video to his Instagram in order to promote the idea that we must all #StayHome for our loved ones. Everyone's now following the tag!

Josh Gad has taken some trouble out of the hands of parents, and into his own, by posting videos of himself reading bedtime stories. It truly is heartwarming.

Jessica Alba has taken it upon herself to use her platform to help families in need. Her company is going to be providing 3 million diapers as well as other baby products in order to spread some love.

The singer has started her own self-isolation live stream show on Instagram where she features other celebrities in order to discuss some important social topics including faith, hope, and love. Features guests include Demi Lovato, Hailey Baldwin, and Ellen DeGeneres.

One of the fastest rising celebrity couples has to be Cameron and Lauren Hamilton from the Netflix show Love Is Blind. Taking inspiration from Miley Cyrus, the pair has started their own YouTube channel.

In a video, he urged us all to stay home and people took this as the word of God.

Taking a leaf out of Devito's book, DeNiro joined the fight.

Stiller also joined the fight to get everyone to stay home. What a formidable trio.

Noah Centineo is doing all of his fans a service by offering them the chance to chat with him via text. He got a separate phone and gave out his number so that he could help them remain calm and sane while in self-isolation. What a man.

The legend showed us how he's self-isolating and yes, it involves his precious and unusual pets.

The former One Direction member is bringing his fans joy by telling them how he plans on spending his quarantine time. Spoiler Alert: It involves many face masks.

Lizzo and her flute are giving us life.

Liam Gallagher has remixed "Wonderwall" to give us "Wanderwash." And in true Gallagher fashion, the video involves some very colorful language... Entertaining nonetheless.

Some strange news for you now. Madonna recently posted this little snippet to her Instagram story with the hashtag #Quarantine. As confused as we all are, we appreciate the thought, I guess? Thanks, Madonna!

Jennifer's approach to this whole isolation thing has always been about spreading positivity for others. So she posted this video of Reese Witherspoon reading Uni The Unicorn for all the bored children out there.

Cardi B is definitely keeping us entertained over this difficult period. On Day 3, she posted this video. However, I would advise you not to try this while you're home... It looks painful. Ow.

Who knew Steve and his banjo could provide us with so much quality entertainment? I did. And he didn't fail to deliver.

We've all probably seen this by now. I mean, the thought was nice but the overall response was mixed... I enjoyed it though and so did at least a million other people.

The Italian supermodel has spent the past few weeks spreading love and awareness via her Instagram. With over nineteen million followers, Chiara has had a positive influence on her fans, giving them tips on how to spend their time in self-isolation.

Another former member of One Direction trying to spread some love to their fans especially. His most recent live stream featured a thirty-five-minute acoustic set.

It seems like a lot of musicians are taking the chance to throw some creative ideas out there. Can we refer to this as creative?

Hozier followed suit. The "Take Me To Church" singer gave us a show we won't forget, that's for sure.

The singer turned beauty mogul has donated 5 million dollars to the relief efforts to help those most affected by the pandemic. And with Fenty Beauty offering Q&A's on their Instagram, it gives other beauty enthusiasts the opportunity to spend their time perfecting their skills.

Coldplay's lead singer kicked off his online concert series by performing some of his favorite songs and the lyrics have never been so relatable. Add this to your list of things to watch.

25. Christine And The Queens.

The French band leader had her own way of keeping us entertained and yes, it involved her performing some amazing hits. However, after some technical issues on her second Livestream, she might have to try that one again... Keep your eyes peeled for that!

John Legend and his wife have provided us with some quality content over the weekend and this is just one of the videos from the range they have been posting. You really can't go wrong with these 2, can you?

After appearing on Miley Cyrus' BrightMinds Livestream, the singer took to Instagram to post this picture and explain the importance of staying at home. She also challenged her other celebrity friends to join in with the challenge.

After her friend, Vanessa Hudgens, made such a horrible blunder on her own Instagram Livestream, you would think that would put her off. But no, Ashley is much more clued in than Vanessa. She has been showing us how to master TikTok.

Justin and Hailey Bieber have taken this TikTok thing to a whole new level by showing us some easy routines we can try at home and you know what? I'm considering it.

John Mayer and Dave Chapelle gave us a show not to be missed as they discussed some current hot topics including, "why is everyone going crazy over toilet paper?" That's an answer I've been craving.

The star took to Instagram to teach us how to make a Negroni - and the internet loved it.

May this video of Stanley Tucci doing a cocktail masterclass be a blessing upon your twitter feed. https://t.co/62R1TjsAqA
— Nerd Girl Says (@Nerd Girl Says)1587428060.0

And was, for a period, trending worldwide. Not bad, huh?

Some had this reaction.

women only want one thing and its stanley tucci patiently making a cocktail and explaining each step as he does so
— "tilly" (@"tilly")1587459879.0

It was oddly romantic.

Others were a little thristier.

I want Stanley Tucci to manhandle me the way he slams down his cocktail ingredients https://t.co/W9Fg3YCQOV
— James Besanvalle (@James Besanvalle)1587459964.0

And not just for the negroni!

But we all agreed on one thing.

A true blessing for the timeline. Thanks, Stanley! And he's not the only star sharing the love via cocktails. Scroll on for Ina Garten's valiant efforts ...