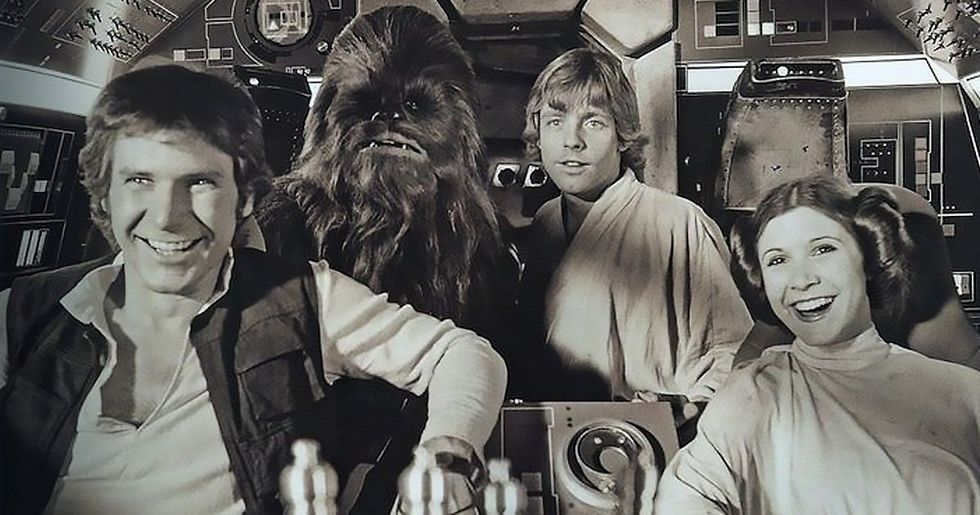 It's about as good a time to be a Star Wars fan as it has been since 1977. Between the positively excellent The Mandalorian on Disney+, the incredibly fun Star Wars Jedi: Fallen Order on Playstation 4 and Xbox One, and the follow-up to the best Star Wars film, The Last Jedi (go ahead and @ me), on the way next month in Episode IX: The Rise of Skywalker, we have more exceptional Star Wars stuff to revel in than ever before.

And so, what say we continue the reveling? We searched the galaxy for the funniest Star Wars memes the internet has produced and collected them here. We've got memes here that you'll love, whether you're so deep on Star Wars you're already wearing your Jedi robes for the Rise of Skywalker premiere or you didn't even know what the deal was with that weird big-eared baby at the end of the first episode of The Mandalorian.

I'll Die On This Hill

Sometimes you have to risk it to get the biscuit. Standing up for children's rights across every galaxy is clearly something this Redditor is willing to go to war for.

You've got to trust your mentor, unequivocally. That's the whole point of having a mentor. But when they makes requests like these, they make it real tough.

The idea of Obi-Wan reveling in how he beat Anakin back on Mustafar is very funny. I like thinking of this wise old Jedi acting this catty.

Some fights are worth fighting, other fights are not. When it comes to internet battles, lightsaber or otherwise, it's clear where this Redditor stands on whose lightsaber squabble is actually worth penning out paragraphs for.

Communication is key in any relationship.

Oh my god, how do we know Han could understand Chewie? Maybe he's just been doing that thing we all do where you misunderstand someone too many times, so instead of just asking them to repeat themselves again, you just respond to what you think they said.

A lot of siblings deal with favoritism, and yes, this is a pretty blatant case. But Luke, did your planet get blown up?

What more do we need to know?

A lot of work's been done to fill in the backstory of Han Solo. Let me ask — was any of it worth it? We knew all we needed to know back in the Mos Eisely cantina.

It's rare that people with opinions get along on the internet. However, one of those rare times will always be when a film sequel is released. The Last Jedi was no exception to this rule, for better or for worse.

Not expecting that response...

Not even a real fan.

Can't believe we cast someone with so little knowledge of the Star Wars franchise. This guy is a total fake nerd, and he is no longer invited to my D&D game.

So that's why Episode VII went down as it did.

When Kylo Ren said in The Last Jedi, "Destroy the past. Kill it if you have to," I don't think he meant "especially if the past is demanding a huge salary to return to a role it was never super into in the first place."

"Now this is important!"

The fact that Palpatine will be back for Star Wars: Episode IX does kind of make what Anakin did at the end of Episode VI less relevant. Glad to know I'm not the only one concerned about this.

I Hate It Here

We keep asking ourselves if these types of people actually hate the movie or if they're too stuck on the nostalgia of the past movies in the franchise. While everyone is entitled to their opinion of course, there's some seriously great content they're missing out on by not giving it a chance. Despite all that, this meme is top quality.

I mean, he is Leia's father, which is easy to forget since he didn't make a big dramatic to-do about telling her like he did with Luke. Darth Vader? Biiiiit of a drama queen.

This perfect combination of Star Wars and a meme was drawn by JB Casacop.

I’ve made a huge mistake. Mom loves her Jesus Christmas present and I’m not sure how to get out of this thing alive when she figures out. - [account deleted]

Improv is an important part of the process.

Interestingly enough, originally C-3P0 wasn't a droid, but was instead a wealthy and fancy man, until a similar on-set ad-lib by Anthony Daniels.

If you grew up unable to express your feelings, having someone in your life like Emperor Palpatine can be powerful, and unlock a lot.

Who's really to blame for Darth Vader?

When Anakin argues in Revenge of the Sith, "from my perspective, the Jedi are evil," this is what he's talking about.

It was weird to fall in love with a nine-year-old.

The greatest mystery of the Star Wars prequels is not the truth behind Midichlorians, but instead why anyone thought it would be a good idea or Anakin to meet Luke and Leia's future mother when he was nine years old.

Here's another bit of parenting advice: when your child needs you to throw an evil emperor down a dark pit lest they be killed by Force lightning, you show up.

Sins of the father.

Look at this from Kylo's perspective — he's probably heard his dad making dad jokes like this for years. We all would've been fed up.

So sweet, but so naive.

If even Jedis get education fatigue, imagine how we feel, learning not how to levitate objects with our mind, but trigonometry. Yeesh.

Did you guys do this growing up? Just ask your friends the most introspective philosophical questions in the middle of the night? Is this what married couples do?

We all knew that kid.

Good thing we had a guide.

Turns out, Leia was the only sensitive person in the entire galaxy.

I remember having nightmares as a kid about getting stuck in the Sarlacc pit. It's not so much that it'd be agonizing, just that it'd be boring.

The Force is saucy with this one.

It's good to know that Obi-Wan is not only sex-positive, but by refusing to answer questions, shows he respects healthy sexual boundaries.

Gotta hand it to him.

Dude, we all know not to talk about Order 66. That was, like, really hurtful to Jedis. Just let it go.

Oops, let it slip there.

I like to imagine they then had a respectful, shame-free discussion about what they were both comfortable with and what they wanted to explore.

Everyone handles conflict differently. Some people prefer to scream and shout until they're blue in the face. Others would rather just fight and get it over with.

A surprise to be sure, but a welcome one. - terra_chris