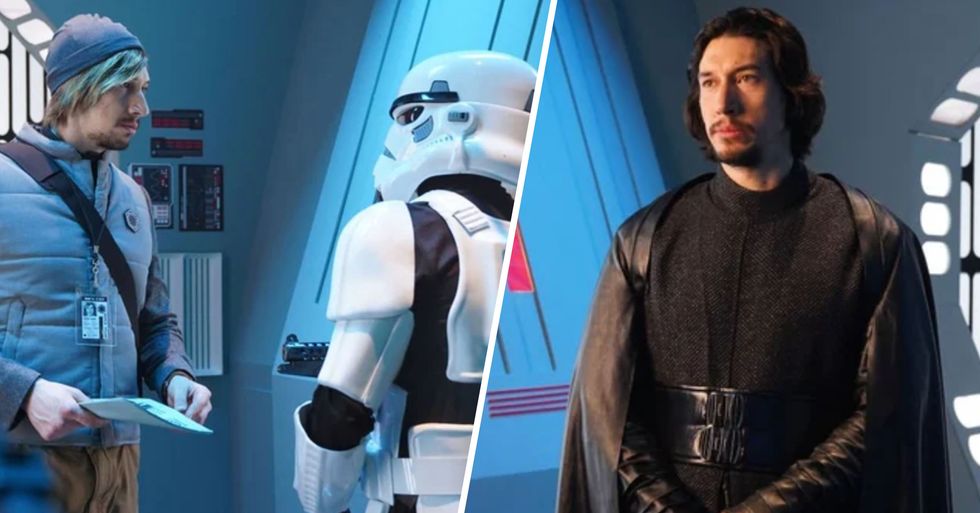 You've seen actor Adam Driver in Girls, This Is Where I Leave You, and Midnight Special. But his most recent and possibly most well-known role has been Kylo Ren in the Star Wars series. He's always had a weird obsession of not watching himself in the role though...

However, he had no problem reprising the character in order to go undercover one last time in the latest installment of "Undercover Boss" on 'Saturday Night Live.'

Keep scrolling for the hilarious video. I can assure you, you'll find yourself loving the supreme leader...

This is Adam Driver.

You may know him from Girls or This Is Where I Leave You...

In Girls, he played the main character's love interest, Adam Sackler and in the comedy-drama This Is Where I Leave You he was Phillip Altman, securing one of his most major roles.

But the role he is best known for is Kylo Ren.

The supreme leader of the dark forces, Kylo Ren is one of the ultimate baddies in the Star Wars franchise.

However, he wasn't always an actor...

Before he got his foot into that door, Driver was actually in the Marines where he stayed for two years before being discharged after a serious injury.

He decided to pursue a career in the world of acting.

He attended Juilliard in New York and after graduating, he started appearing in Broadway productions as well as plays.

And then eventually fell into the film industry.

After securing some minor roles in other projects, he started calling the bigger shots once he secured some important supporting ones.

But because of his background in stage plays, he has a strange habit...

He hates watching himself in movies. It's understandable because he's used to just performing and not having it broadcasted in theaters.

He went as far as avoiding watching the Star Wars films he was in.

He even declines the opportunity to listen to his own audio clips for radio interviews!

However, everyone else enjoyed his performance as Kylo Ren.

Star Wars: The Rise of Skywalker saw the complexities in his character as he battled his inner demons to realize the goodness within such a dark past.

Everyone admired his depiction of the character.

Typically, he always found himself playing socially awkward characters so it takes a skilled actor to make such a drastic switch to portray an evil leader. This role helped him gain a loyal fanbase.

After his first appearance in the Star Wars franchise in 2015, we already knew Driver was an actor to be admired, but his abilities were cemented when we saw him star in his own dark "Undercover Boss" skit on Saturday Night Live.

It became an instant hit.

Star Wars fans and even those who hadn't ever seen Driver in action were left laughing their socks off at his hilarious portrayal of an evil character playing such a mundane role such as a boss.

The second installment of the skit premiered 4 years after the first on SNL a few days ago and audiences can't stop talking about just how funny it was. Keep scrolling to see the full clip.

Let me set the scene.

You've heard of the reality TV show, Undercover Boss, right? It's pretty self-explanatory. A boss goes undercover, posing as a new employee or something along those lines in order to see how the regular employees function on a daily basis.

But imagine that for a dark lord and his Storm Troopers...

Adam Driver reprised his role as the evil version of Kylo Ren in order to understand how things were going at Starkiller Base. But he isn't the greatest boss we've ever seen... and depending on how bad yours is, he probably isn't the worst.

Deep in character, Ren talks about his personal issues distracting him from his boss duties: “I’ll say it, I haven’t been the best boss lately - I’ve been distracted by some personal drama."

Then the voiceover explains in more detail:

“Days after appearing on our show, Kylo killed his dad, cut his mentor in half, fired upon his mother’s spacecraft and is now obsessed with finding a young Jedi named Rey." An animation recaps the events from two of the Star Wars films.

So he decides to go undercover as a new intern, to see what his squad really get up to...

Let's just say things didn't end well. Ren ends the skit by rounding up his time at the base: "I made four new friends and only killed one of them... I’d say that’s a pretty good start."

Audiences found the entire thing hilarious, as did we. It's definitely quality entertainment for a Saturday night.

And if you're in the mood for some more Star Wars related news, then keep scrolling and check out the secrets as to why Storm Troopers are known to be the worst shooters in the whole galaxy...