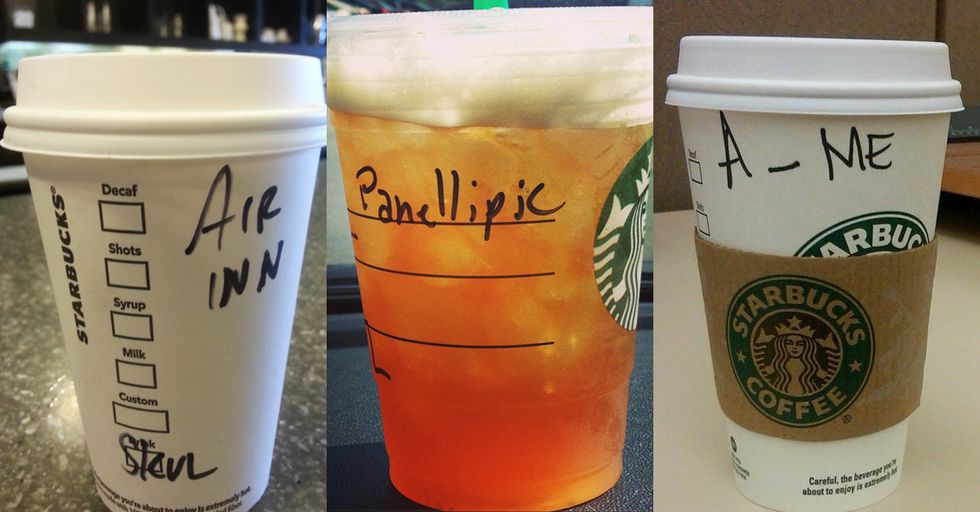 Have you ever had this happen to you? You're in line at the coffee shop, and you reach out your hand to take the cup, but you find that some strange name is written on it.

Nearly everyone has experienced this at one time or another. The results can be hilarious—even cringeworthy. On this list of crazy coffee cups, you won't believe the wild things baristas have come up with.

None of these examples are minor misspellings. From words that are not names to throwing random letters on a cup outright, every one of these cups is sure to make you blink. Whoever wrote them is clearly not in the habit of correct, or even logical, spelling!

Who would be named "Syringe?"

I’m pretty sure that’s a tool, not a name.

The name was "Mimi":

Because "MeeBee" is a way more common name than "Mimi."

How would that name be pronounced?!

It’s a person, not a soup company.

This is the first time Starbucks has got my name wrong. My initiation begins. https://t.co/BGeeUV0rqo
— Cameron Brown (@Cameron Brown)1535727912.0

And somehow, the barista got "Campbell" out of "Cameron."

They got it wrong on the first try:

Misplaced confidence can be funny.

Funny, that is, as long as you don’t mind the blatant misspellings!

Even the most common names can be misspelled.

Despite having one of the most common names going Starbucks still misspelled my name drastically wrong. It's either… https://t.co/kDvalzaJ4g
— Sarah Clark (@Sarah Clark)1532796625.0

There are a few spellings for "Sarah," but that’s never been one of them!

Even nicknames can be troublesome.

So close, yet so far away!

This is a strange misspelling.

Seriously, where do you get the "ton" part from "Shelby?"

You done messed up, A-A-Ron.

To nobody’s surprise, the name "Andrew" doesn’t have two A’s in it.

This one is a little hard to read but still hilarious.

Ordered from @Starbucks for the first time ever. I can take "have name completely spelled wrong at Starbucks" off t… https://t.co/HAp8ZK1kls
— Warren Bryan (@Warren Bryan)1537625825.0

Does it say "Wernin" or "Wermin"…or "Wennin?" Either way, it’s definitely supposed to say "Warren." Oops!

This Cameron was taking no chances.

Yet, somehow, they still got "Can" instead of "Cam."

When a name is too tough, just write "enjoy" on the cup. That’s an interesting strategy!

This one is a real puzzler.

You wouldn’t think that there’s a mistake, but surprise! It was supposed to be "Darren."

Yeah, no, I’d rather have my name misspelled as "Can" than this.

This Starbucks barista might have been having a bad day.

You can tell by the way they just give up halfway through Margaux’s name.

Who are you calling a moron?

Pro tip: try not to insult people with their coffee cups, even if it is an accident.

They had to know this wasn’t the right name.

Do the two words sound alike? Sure. Is one a name, while the other refers to members of a major religion? Also yes.

It feels like this person is being compared to some kind of missile.

Whatever the name was, it wasn’t this:

1) This feels like an attempt at an insult.  2) "Voldemort" is still spelled incorrectly.

It shouldn’t be so hard to put two and two together. After all, the sounds are all there, so why doesn’t it just say "Amy?"

For anyone to think someone’s name was "Poo," you’d have to be having a pretty crappy day.

This name seems a little nutty.

Are we sure they weren’t just writing down a flavor in the coffee?

Maybe just don’t sound it out directly onto the cup next time.

Going for broke on this drink.

Hey, now. If she was broke, how could she buy the coffee?

This was a valiant attempt.

Ultimately a failure, but still. At least you can kind of tell it says "Penelope?"

The name isn’t clear, but it doesn’t say, "Patricia."

What does it say? Botchadu? Botchahee? We honestly can’t say.

The first try was actually closer.

Between "Nick" and "Derrick," they probably should have stuck with the one that at least starts with "D."

At least nearly everyone else on this list tried to learn the right person’s name. This is just lazy.

This is Starbucks, not a word association exercise. Share these tales off caffeinated woe with your friends!