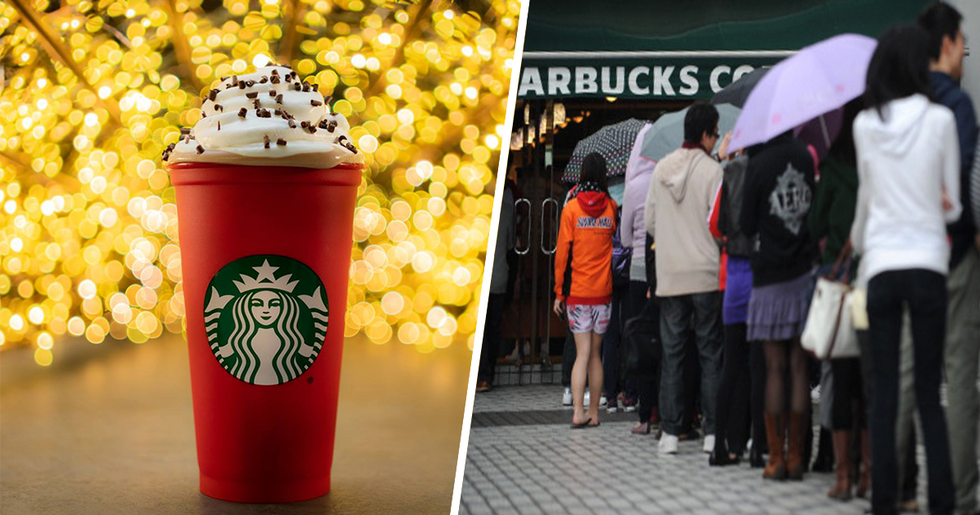 Ah, it's that time of year again. The unofficial start of the holiday season! Some people believe the winter holiday celebrations start after Thanksgiving, but I think they truly begin when Starbucks unveils their winter-brand coffee cup.

And there's something different brewing this year (pun intended). Starbucks unveiled it's new cup on Instagram, causing heads to turn. First off it's reusable, and secondly, it's only ONE color. Coffee lovers rejoice!

Starting Friday, November 2nd, you can get a FREE reusable holiday cup with your purchase of any holiday-themed drink.

Yep, a free cup with a holiday drink purchase– the only catch is that it has to be a holiday drink. But don't worry, there are plenty to choose from! You can pick from an array of themed drinks, including Peppermint Mocha, Toasted White Chocolate Mocha, Caramel Brulee Latte, Chestnut Praline Latte, Gingerbread Latte, and Egg Nog Latte.

You can save a few bucks while also saving the environment.

Wait, there's more! During the holiday season (November 3rd to January 7th) you can receive 50 cents off your order when you use your environmentally friendly drink cup at any Starbucks location after 2 pm. For everyday coffee drinkers, that 50 cents can add up to a lot of money during those next couple of months!

Here's what we know about the cup:

First of all, it's reusable. Who doesn't love a good "saving the earth moment?" While you're sipping dowing that hot chocolate or hot coffee you can feel like you're doing the earth a favor. The next time you head to Starbucks, bring your reusable cup along, and they'll serve your drink right in it!

Starbucks made the reusable cup only one color....red.

This year Starbucks decided to make their holiday cup a solid red color, instead of the playful designs that they're typically known for. This came as a bit of a shock to the coffee community and Instagrammers alike, who love to snap pictures of their artsy-looking cups. But, this year the company wanted to focus on its customer's sustainability efforts.

Starbucks has a history of holiday cup controversy.

The brand is known for their controversy revolving around their holiday-themed cups. When the company unveiled their white, doodle-design cup in 2017, some customers were not impressed. They pointed out that the doodles featured two interlocking hands, which looked to be male. This sparked an outrage online, with customers calling out the brand for supporting a "gay agenda." But many also disagreed. They're no stranger to feedback from customers, and maybe this new cup decision was a result of that. What do you think of the new cup design?