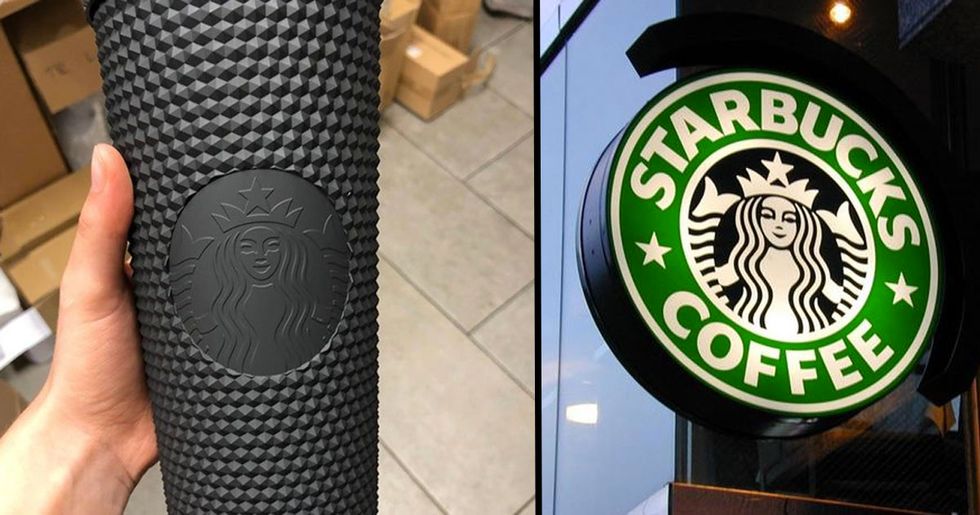 It's not even September yet and Starbucks already appears to be getting into the fall spirit. Not only are they releasing their Pumpkin Spice Latte earlier than ever (much to some people's dismay), but the coffee giant is now releasing spikey matte black tumblers that are giving us all the spooky witch vibes we need.

Some customers have been lucky enough to snag the fall-inspired cup early, posting snaps of the new design online, which has pretty much caused the internet to go into a Halloween-induced frenzy.

Keep scrolling to take a look at the design in all of its witchy glory...

Which means one thing: it's coffee, cozy socks, and pumpkins galore.

And Starbucks seems to be getting into the fall spirit earlier than ever this year.

They are even bringing back the nation's favorite fall coffee this month. The beloved Pumpkin Spice Latte is returning from August 27, which is pretty early.

And, to mark the occasion, the coffee giant is releasing a matte black, spikey tumbler.

The gothic cup was first spotted and posted by Reddit user, flwerp0wer, on the r/Starbucks Reddit forum, and it appears to be fairly large and comes complete with the traditional Starbucks logo, studs/spikes, and a matte black color.

We can imagine channeling our inner witch, sipping our iced Pumpkin Spice Latte out of this bad boy...

According to the comments on the Reddit post, the cup is expected to be released at the end of this month, but it appears that at least one Starbucks location has already started rolling them out.

And it seems like many people can't wait to get their hands on one.

Like this user, who's willing to go to drastic lengths to purchase the new tumbler. But, for those of us who haven't been lucky enough to snag the cup, we'll have to sit tight and wait for their official release. In the meantime, it's not just Starbucks that are getting into the fall spirit early this year, because, in an unlikely turn of events, Spam is creating a pumpkin spice version of the notorious canned ham. Sounds gross? Well, people are saying that it's surprisingly delicious. Keep scrolling to find out more about this bizarre food combo...