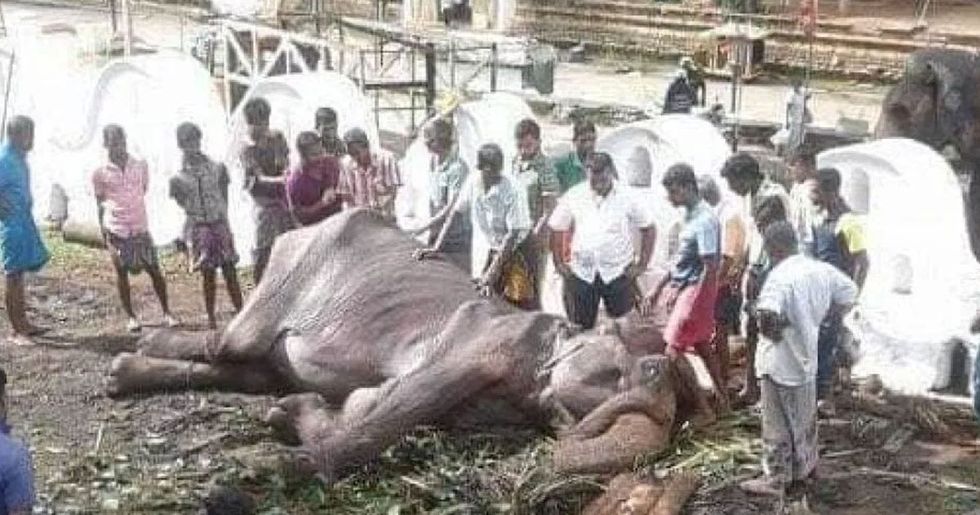 The use of wild animals in global events such as circuses and festivals has strongly been debated over the last few years, and many countries have made it illegal to use these animals in forceful situations that these events require.

The abuse and suffering that animals go through at the hands of the entertainment industry is truly heartbreaking, and it's a harrowing fact that it still happens to this very day.

Recent footage of an elderly elephant in Sri Lanka has devasted millions around the world. The skeletal animal is seen being forced to perform for an excited crowd before it collapses out of sheer exhaustion.

Keep scrolling to see the heartbreaking photo, and to hear the fate of the emancipated animal.

This elephant is named Tiikiri and she is seventy-years-old. She is seen here wearing the traditional robes that elephants are required to wear during the festival, so it's hard to see the deteriorating condition that the poor animal is in.

Poor Tikiiri is extremely malnourished due to abuse and mistreatment.

She looks frail and exhausted.

The foundation has begged its followers to "pray for Tikiiri..."

They went on to say: "Some people are blind in their hearts, and care less than others. Look at this poor old girl who has fallen down and the whole world can see her." The neglect and abuse that Tikiiri has endured is clearly very upsetting to witness for the staff of the foundation, as it is for everyone viewing the images.