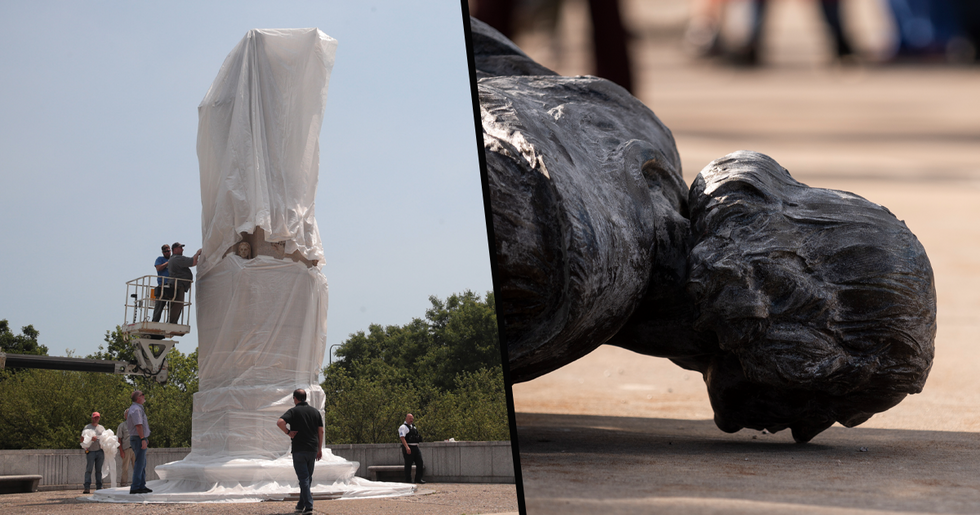 As the protests continue across the country, some protestors have taken it upon themselves to re-arrange the furniture in their local areas, starting with all the "racist statues."

A statue of Christopher Columbus in Chicago's Grant Park is the latest one to be removed.

And there's now been another Christopher Columbus taken down.

But, this time it was removed after Mayor Lightfoot ordered its removal following violent protests.

The Christopher Columbus statue in Chicago's Grant Park was taken down in the darkness this morning after protests of violence that led to the deployment of federal forces in the city.

The removal took place just hours after Mayor Lori Lightfoot had authorized it.

Crews who attended the park used a large crane to hoist the statue from its spot.

#CHICAGO - BLM & communists celebrate the removal of the #ChristopherColumbus statue History is not there for you… https://t.co/TMRYb4gdCk
— 𝐒𝐭𝐞𝐩𝐡𝐞𝐧 🇬🇧 (@𝐒𝐭𝐞𝐩𝐡𝐞𝐧 🇬🇧)1595589333.0

The statue had already been wrapped in plastic prior to protect it from vandalism.

As the statue was removed it had a small crowd cheering it on.

Along with cars honking as it was brought to the ground.

In came down in the darkness at around 3am in the morning with very few people around.

Once placed on the back of a truck it was driven away, although it is not known where too.

The authorization of the removal of the statue by Lightfoot came after she had previously opposed it.

And although there were many cheers at the removal, others were not happy with it.

Like a thief in the night, Christopher Columbus was taken away by city workers under orders of Mayor Tanglefoot. Li… https://t.co/8I65zFKIVQ
— Ron Milner (@Ron Milner)1595591967.0

Whilst The Daily Mail reported that Steve Cortes, spokesman for pro-Trump Super PAC America First, called the mayor 'feckless' and accused her of giving in to "violent nihilists."

Unfortunately, actions will never please everyone.

Keep scrolling to see why these celebrities were called out because of their reaction to the BLM movement...