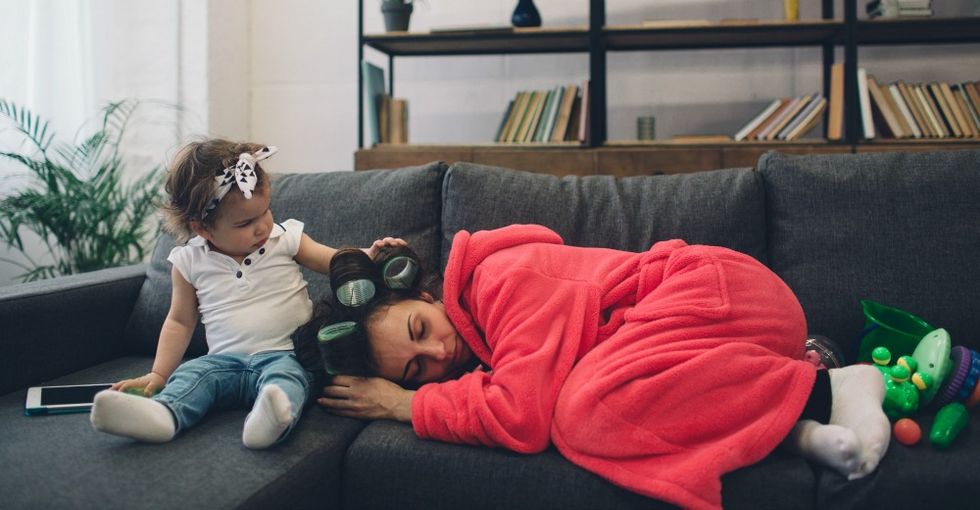 Proof That Stay at Home Moms Have the Easiest Job

If you ask me, stay-at-home Moms get all the perks. They don't have to commute to a boring office every day, they can lounge around wearing sweatpants and not shower for days at a time, they have all the free time in the world to keep their house looking spotless, and they can day drink to their heart's content without fear of getting fired for being drunk on the job. So when people talk about how these stay-at-home Moms, or SAHMs for short, have it so rough, I tend to get a tad irritated. Are you kidding me, people? Don't you realize that these women have 24/7 access to their fridges AND TVs?! That sounds like my absolute dream job!

This is why I vowed to dig up some proof that they actually have it way better than the rest of us poor schmucks. Below is what I discovered after spending the day with one of my best Mom friends.

Let me tell you, those SAHMs really have it all figured out.

Have you ever heard that age-old saying, "Stay-at-home moms have the hardest job"?

I've been hearing it my entire life, and it's always struck me as strange. What exactly is so hard about this "job" anyway? I'd kill to be able to lay around the house all day long!

In an effort to get to the bottom of this ridiculous claim, I decided to seek out my best SAHM friend to find some proof to the contrary.

I've known my friend Beth since college, and while we used to be extremely close, ever since she got married and had three kids in the span of four years, for some reason, we've started drifting apart. Suddenly, little miss "no job" thinks she's too good for me!

I call her up one sunny Saturday morning to see if I can drop by and observe her daily life firsthand, much like Jane Goodall observed gorillas in their natural habitat.

After about 10 rings, the call finally goes through and a small, high-pitched voice begins babbling gibberish on the other end of the line. "Caleb! Give me the phone! NOW!" It's Beth, screaming in the background at her 2-year-old.

I chuckle to myself, picturing her adorable son holding her cellphone up to his tiny head, and feel a sudden pang of jealousy.

Her life must be filled with so much joy and whimsy, I think to myself. I'm so distracted by these feelings of maternal longing that I barely even noticed the sheer chaos coming from the other end of the line.

Beth's muffled screams of "STOP IT" and "PUT THAT DOWN" are combined with a chorus of screeches for several minutes until she finally comes to the phone.

"Yes, who is it?" she says, slightly out of breath and having to yell due to a fresh toddler tantrum erupting in the background.

"Hi, Beth! I was wondering if I could stop by this afternoon for a visit!"

The line goes silent, and for a minute I think the call might have dropped. "Hello? Beth? Are you there?"

"Oh, I won't stay long. I'll bring you some macaroons!" "Um...yeah, I don't know..." "It'll be sometime between noon and 4 pm. See you soon!" "Wait, I'm not sure...JOSH, STOP!" The line goes dead, and I smile to myself at the thought of how idealistic her days with her munchkins must be. She truly is #blessed.

I get to her house a few hours earlier than I said I would, but since she has no schedule to stick to, I figure she wouldn't mind.

I pull up in front of her house to see an assortment of toys scattered across her front yard including several bald Barbie dolls and an upside-down Power Wheels Jeep that's still turned on, its wheels spinning at a high rate of speed and emitting a noise that sounds vaguely like a dying animal.

I ring the doorbell and wait for what feels like 20 minutes for Beth to come to the door.

What could possibly be taking her so long? I think to myself. She's probably finishing up her bubble bath and washing off her lavender face mask.

After basically an eternity, Beth answers the door.

"Hi..." she says halfheartedly, and I realize that she's wearing the exact same pair of stained sweatpants and oversized Garfield t-shirt with the "I hate Mondays" graphic that she had on the last time I saw her. Sweatpants all day long? I think with a sigh. Talk about living the dream! Plus, judging from the clumps of cottage cheese lodged in her hair, it looks like she doesn't even bother with taking a shower anymore!

I walk into the living room and nearly trip over the millions of Legos, action figures, and stray diapers that completely cover the floor.

"Sorry it's a mess, I didn't get a chance to clean up..." she says. I roll my eyes internally. Must be nice to lay around all day and not even have to clean your house.

"Do you want anything to eat?" she asks as we make our way to the kitchen.

The kitchen! I think to myself. Yet another reason why she's so lucky to be a stay-at-home-Mom!

She gets to enjoy the most decadent breakfasts and lunches in the comfort of her own home, while I'm forced to choke down my microwaved Cup O' Noodle in my depressing cubicle every day. It's just not fair!

"I don't have a ton of food in here except kid's stuff. All I had for breakfast were the Cheerios that Josh threw on the floor."

As she opens the fridge, I spot another reason why her so-called "job" is pretty much the best job ever: BOOZE. That half-full bottle of white wine on the door is up for grabs whenever she wants it. What's stopping her? There's no boss to fire her for drinking on the job, right?!

"I'll take some wine," I say, pointing out the bottle.

"Oh wow, I forgot this was in here," she says, inspecting the bottle closely. "Matt and I bought it for our anniversary ages ago and I haven't had any since I first started potty training Caleb. I drank it on the toilet while crying."

I laugh at her joke, but she stares at me without smiling.

"Where are the kids?" I ask after realizing how peaceful the house is. "I finally got them down for a nap. It took all morning. I had to bribe Josh with seven Oreos just to get him into his pajamas."

I watch as she frantically starts doing the dishes, and again feel a pang of jealousy.

Look at all her free time! I think to myself. Kids sleep a lot. Now she can do whatever she wants for hours on end while they nap! Her life is pretty much all "me" time!

I follow her around as she puts toys and books into their various bins and cubbies.

"You're so lucky!" I tell her as she crouches down to scrub a stubborn stain on the carpet. She slowly stands up and turns around to face me.

"Lucky?" she asks, appearing not to have heard me correctly.

"Yeah! Having to go to the office every day is the worst. I'd love to be able to hang out at home all day long and just play with my kids."

She thinks for a moment and starts to respond, but before she can say anything her three kids explode out of their bedrooms and run, screaming and drooling, down the hallway.

Beth looks at them helplessly and says something that sounds like "That was only 15 minutes!" but it's hard to hear over the noise. Her youngest, Josh, crouches down to rip off his diaper and throws it onto the ceiling fan before running around naked from the waist down like a tiny, drunk Winnie the Pooh.

Ruby, her oldest, grabs a stuffed giraffe from Caleb and runs across the room with it, causing him to burst into tears and run after her to retaliate.

As Beth tries to intervene, I notice the pantless Josh is now standing in the corner with his back to me. "Uh, Beth?"

"Caleb had that first! We don't just grab toys from people!" she's saying to a now-crying Ruby.

"Beth, I think maybe there's a situation over here..." She still doesn't seem to hear me since Ruby is now on "time-out time" and is not taking it well.

After a solid five minutes of struggling to get her to apologize to her brother, Beth looks over at Caleb and screams.

"Are you PEEING on the CARPET?!" She stares at him stunned for a moment, then, in one swift motion, scoops up his tiny, half-naked body, runs him into the bathroom, and slams the door shut.

I look at her two remaining kids and smile.

"Your Mommy is such a lucky lady!" I say to them as they fight over an Iron Man toy while ignoring me completely. "She gets to just stay home and have fun with you all day long!"

After losing the battle of the action figure to his sister, Josh suddenly decides to make his way over to where I'm seated on the couch.

"Hey, buddy!" I say as he slides up onto the cushion next to me. He cozies up beside me and actually crawls into my lap.

My heart explodes with an overload of adorableness.

Look at this perfect angel! I think. Beth gets to cuddle with these cuties all day long!

As I look down at his perfectly miniature face, he starts to fidget in my lap in a way I haven't seen before.

Out of the blue and before I can do anything to stop it, he leans forward, closes his eyes, and projectile vomits across the room.

I've never seen so much vomit come out of such a small human being.

It reaches halfway to the kitchen, and I can instantly tell from the color and consistency that the once-beige carpet would now forever be stained split-pea-soup green.

It's at this very moment that Beth emerges from the bathroom, walks into the living room, and stares at her vomit-covered carpeting.

"We had a little accident!" I say cheerily, chuckling at how hilariously unpredictable kids can be. Those little dickens!

I check my cellphone for the time and realize that I'm almost late for an appointment.

"I have to run! I'm getting a massage in 20 minutes," I say as I grab my purse and head for the door. "Oh, shoot! I forgot to bring you those macaroons! I'll bring them over tomorrow." Beth starts to say something as I close the door, but I don't quite catch it. As I walk to my car I shake my head at those silly people who insist that stay-at-home Moms have such a hard time. I think about turning around to mention that to Beth, but I can see through the picture window that Caleb is currently smashing Kraft Mac and Cheese into the dog's fur, so I figure I can just tell her tomorrow.