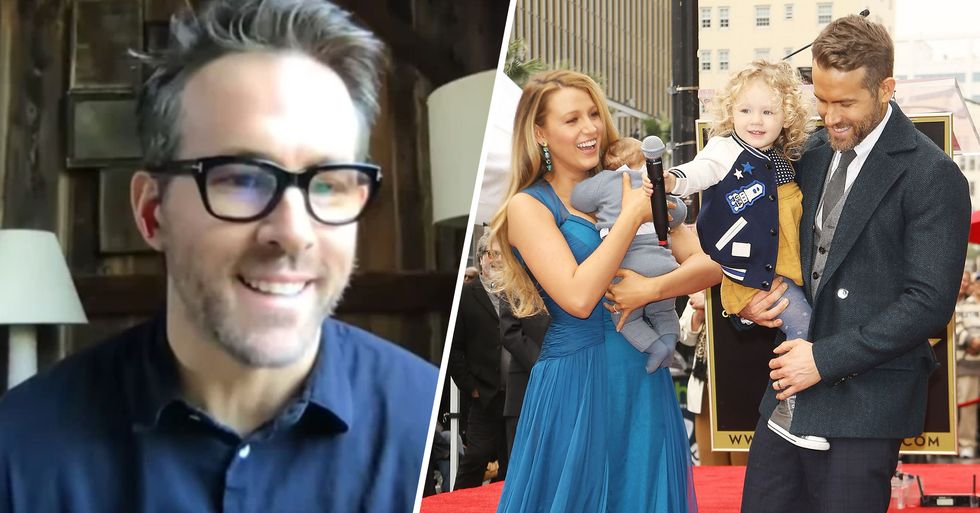 Despite being a famous Hollywood actor, Ryan Reynolds is also well known for being a pretty down-to-earth dad alongside his wife, Blake Lively.

The actor has opened up about life in lockdown with his 3 daughters and it sounds like he's certainly making the most of things.

Keep scrolling to check out his parenting tips...

The pair are undeniably "couple goals."

We honestly don't think we could love them any more than we already do...

And it's easy to see that they work as a great team together in raising their family.

They have James, who is 6, Inez, who is 3, and a baby daughter who was born last year and is yet to have her name revealed to the public.

The couple keeps their family life rather private...

Having matching donor organs in case anything happens to me is a true blessing. #HappyFathersDay
— Ryan Reynolds (@Ryan Reynolds)1529265503.0

Obviously making the exception for Reynold's hilarious stories on Twitter!

But Reynolds has recently opened up about what life is like behind closed doors for him and his daughters.

Appearing on a live-stream chat for The Late Show, the actor discussed how he and his 3 girls have been keeping occupied in the house together.

Millions of people around the world are now in lockdown.

The pandemic has brought the world to a complete standstill...

And just like everyone else, the rich and famous have also been affected by the outbreak.

Reynolds has been staying firmly indoors with Lively and their daughters...

And in his interview, he explained how they, as a family, have been coping with being kept indoors.

His "life-saving" mother-in-law has been staying at the family home with them...

And Reynolds said, "It's been incredible to have her here. She doesn't know it, but actually, she's emergency food if this gets real . . . I will not hesitate to eat the children."

He went on to explain that he's enjoying being surrounded by girls...

"I do not miss the masculine company at all. Really, most men tend to be the architects of someone's demise," he said, "So, it's fine. I like just being here with the girls. I like doing the girl stuff."

The girls, stereotypically, have wanted to make dresses...

"I try not to push gender-normative ideas on my kids as they're born, but each one when they came out that shoot, they wanted to make dresses, they wanted to dress in hot pink all day. So, that's what I do. This morning I made dresses out of tissue paper, which was fun for them. Not bad at all."

The family has also been occupying their time with home-schooling and gardening...

"We're trying to make this an educational experience," he explained, "but I'm mostly drinking."

Totally relateable, we must say!

You can watch Reynold's interview here, and make sure to keep scrolling to check out the video that shows him tearing into celebrities who think people need them during the pandemic...