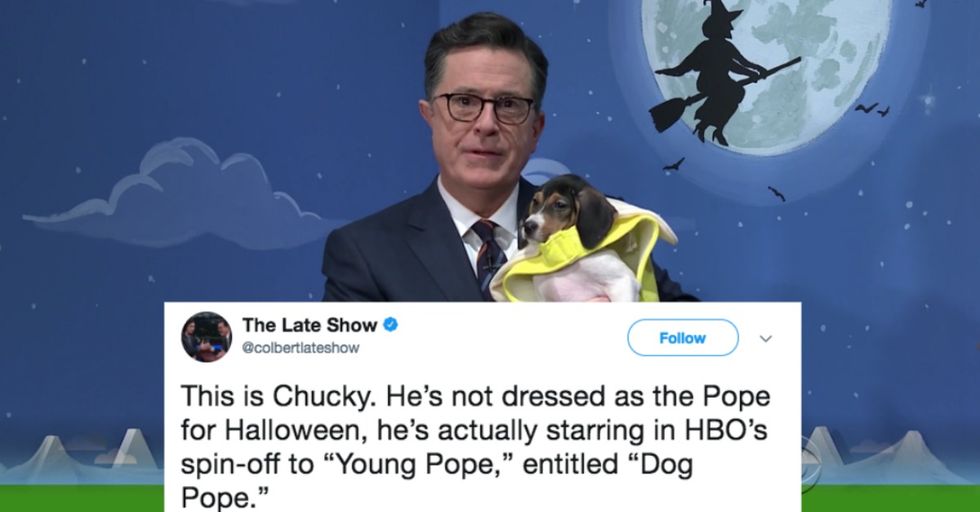 In case you were looking for another reason to love Stephen Colbert, here you go: he is obsessed with dogs. And if that wasn't enough, every so often he and a celebrity on his show showcase dogs from a local dog shelter to help them get adopted.

It works! All of the dogs that Stephen Colbert has had on his show in the past are cozied up at their new homes with perfect forever families.

Last night, he did the same thing with a twist for a special Halloween episode.

In a segment called Rescue Dog Rescue, Colbert and a celebrity tell lies about dogs from a shelter to help them find adoptive owners.

The facts are fake but the dogs are seriously cute! All of the puppies are from the shelter North Shore Animal League America and can really be adopted.

The spookiest part of this segment is the fact that Eichner, who you know from Billy On the Street, Difficult People, and the latest season of American Horror Story, is allergic to dogs. Unfortunately for Billy but fortunately for Colbert, Stephen got to hold all of those tiny pups.

She was the one wearing a banana costume. She's a 13 pound, two-month-old Hound mix who was found in Tennessee. Stephen said, "If you adopt this little banana, everyone will find you 'appealing.' No, seriously, she releases an intoxicating pheromone that makes beautiful people want to have sex with you. Winnie says to wrap that banana."

This dog, Zero, is a ten out of ten in our book.

Zero is another two-month-old Hound mix who was found in Tennessee, weighing 10 pounds. Billy said, "She's dressed as a doctor, but that's just a costume. In reality, she's a high-powered class action attorney with a beautiful lake house. Doctor money isn't gonna put a wine cellar in your boat is it, Zero?"

This cutie, Binx, was dressed as a spooky shark for the show.

Binx was found in Tennesse and is a two-month-old lab mix, weighing 10 pounds. Stephen said, "She's dressed like a shark, but ironically her favorite Stephen Spielberg movie isn't Jaws, it's Catch Me If You Can. She thinks it's a stirring meditation on the pathos at the heart of American capitalism. Seriously, she won’t shut up about it." That's not all of the cute pups...

He was dressed up as a football player, most likely Colin Kaepernick. He only weights eight pounds! Billy said, "Max is a football player who fully supports a player's right to kneel during the national anthem. 'Who takes a stand against systemic racism? You do!' But don't get too excited, he's also a global warming denier. 'Wake up, Max!' Anyway, you'll have some interesting conversations."

Little Chucky was dressed up as a tiny Pope.

He's a two-month-old Australian Shepard mix who weighs 10 pounds. But he's not dressed up as the Pope for Halloween... he has a higher purpose. Colbert said, "He's actually starring in HBO's spin-off to Young Pope, entitled Dog Pope. When he first saw the script, he wasn't sure about all the sex scenes, but eventually decided they were tasteful and necessary to the plot."

Last but not least, meet Kenny.

Sweet Kenny is a two-month-old female Hound mix who weighs 13 pounds. She was dressed up as a cheerleader. Click here to inquire about adopting any of the dogs that were featured on the show. And if your favorite has already found a home, don't worry! You can still become a rescue animal parent. There are plenty more pets looking to find warm homes. You can help out here.