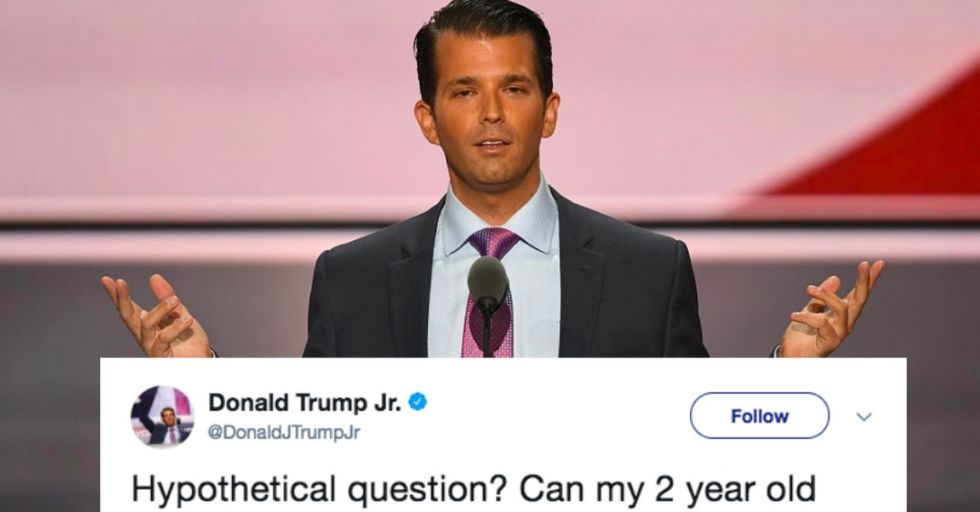 Donald Trump Jr. is bad at a lot of things, including sitting, talking, and having a face. But one of the things he's worst at is Twitter. There are so many examples of Donald Trump Jr. tweeting and then swiftly being mercilessly mocked for his tweet for days on end. In fact, making fun of Donald Trump Jr. on Twitter has become America's favorite past time. Sorry, baseball. Yer out!

The latest tweet of Donald Trump Jr.'s, uncovered by the one and only Stephen Colbert, is no different. Well, maybe it's a little different. He seemed to have sunk to the lowest of depths when writing it. It's insane, as Colbert so graciously points out.

Let's face it: Not everyone is constantly refreshing Twitter for the opportunity to be the first one to mock a member of the Trump family for their latest flub.

If you're not one of these people, let's take a stroll down memory lane and revisit some of Donald Trump Jr.'s greatest Twitter gaffes. After you, good sirs and madams.

There was that time when Donald Trump Jr. thought he was sharing a sweet note from his father, but it was actually tragically sad and explained a lot about his relationship with his father.

Then there was that one tweet when he enthusiastically told people to vote "tomorrow" even though that day, the day on which he was tweeting, was actually Election Day. He told everyone to vote on the wrong day!

Exhibit C is perfect because it perfectly exhibits that Donald Trump Jr. knows nothing about socialism, exploits his poor children for personal and political gain, and is also just a really mean dad.

In this one, Donald Trump Jr. tried to go tête-à-tête with late-night television host, Jimmy Kimmel, and that proved to be a colossal mistake. Trump Jr. tried to catch Kimmel with a question about the Harvey Weinstein allegations, and Kimmel basically slapped him in the face with a microphone before dropping it by responding with the Access Hollywood tape of Jr.'s father, Donald Trump, bragging about sexually harassing women. Donald Trump Jr. and late-night TV hosts have proved to be a volatile combination. In the latest of these, Trump Jr. was swiftly taken down by Stephen Colbert for his totally bonkers tweet...

This tweet, which we're now calling a Donald Trump Jr. Special, is truly one for the books:

Hypothetical question? Can my 2 year old get in trouble 4 sexual harassment for asking his teacher to come to his place naked after school?
— Donald Trump Jr. (@Donald Trump Jr.)1323287802.0

There are So. Many. Things. Wrong. With. This. Tweet. One: Don, why does "Hypothetical question" have a question mark at the end. Are you asking us if you can ask a hypothetical question? Because if so, the answer is no. Two: What!?!?! What! Whaaaaat? In what world would this happen? What are you even trying to get at? Ahhhhh!

The tweet is from 2011, but that did not stop Stephen Colbert from dredging it up on Thursday to share it — and his perfect comeback — with the world:

Insanity is the only possible explanation for this tweet. You heard it here first folks: Donald Trump Jr. is actually insane.

Colbert obviously wasn't the only one who was a bit taken aback by Donald Trump Jr.'s crazy tweet.

There aren't enough "WTF" GIFs on the planet to describe how we feel about it. Someone needs to sit down with Donald Trump Jr., go through his tweets with him one by one, listen to what he thinks he's saying, and then explain to him how wrong he is. Maybe we can get through to him this way.

They asked the question that was on everyone's mind, "What kind of parent" would use their child like that? Even in a "hypothetical" situation, it's so out there and inappropriate that it's hard to imagine how any person could think it OK to do that.

So what kind of parent would do that? Ah yes...

A sociopathic parent. This Twitter user hit the nail on the head. In fact, "showing a complete lack of understanding of social norms" seems to be the M.O. of the entire Trump family. And they're running the country. Cool.