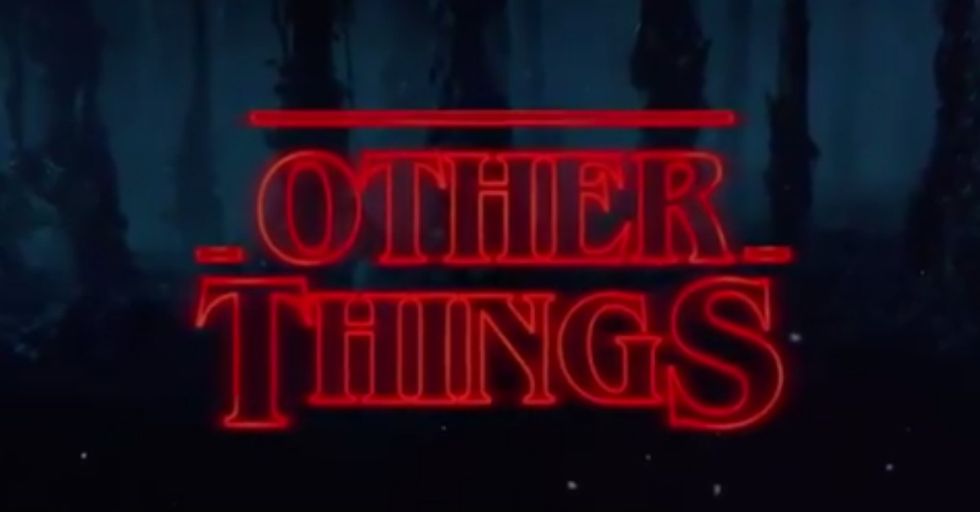 The second season of Stranger Things is premiered on Netflix on Friday, and people are brimming with anticipation to find out the fate of those bike-riding, Dungeons and Dragons-playing kids in Hawkins, Indiana.

But recently, it feels like our real life political climate is the true Upside Down.

Thursday, Stephen Colbert tweeted, "No one says Stranger Things than Donald Trump." Much like the TV series it references, the video that accompanied Colbert's tweet is equal parts delightful and ominous.

The video is titled 'Other Things.'

Colbert's team cleverly tied in clips of Stranger Things with instances where Donald Trump has ended a sentence with, "and other things."

What are those other things?

"We're gonna get other things." What things? Unexplainable flashing lights? Government conspiracies? Demons calling our landlines and breathing loudly through the receiver?

So, like... chocolate pudding? "We're gonna win on infrastructure and lots of other things."

So, like... we're gonna win on sensory deprivation tanks? Explain yourself.

"Mexico, and lots of other things." K, Mexico is a place.

People replied to Colbert's tweet thanking him for adding a well-timed laugh to their day.

When you're living in the Upside Down, you need someone smart by your side. In our minds, Stephen Colbert is our Detective Jim Harper and we're all Will's mom, Joyce Byers.

We're pretty excited that we can escape from this twisted world we're living in for a couple of hours this weekend to find out what is going on in the fictional one.

What happened to [SPOILER ALERT] Eleven after she battled the Demogorgon? Will we hear anything else about poor, loyal Barb? Oh, Barb. Will Will and Eleven rekindle a romance? We have SO. MANY. QUESTIONS. But most importantly, what's going on with those "other things?"