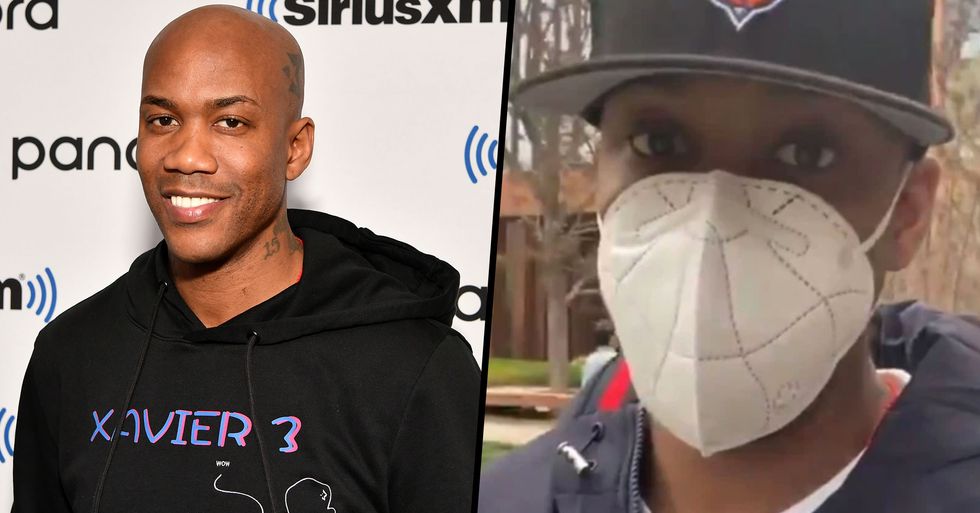 The world is facing a shortage of medical paraphernalia, most healthcare workers aren't even being equipped with the correct resources to keep themselves safe.

But many celebrities have come to the rescue and want to help in any way they can, which will help save lives all over the world.

Keep scrolling to find out about the latest kind soul, Stephon Marbury.

The situation in the country right now is severe...

Right now, 2,613 people have died here in the U.S., which goes to show the terrifying speed of which the virus is spreading.

All over the country, hospitals are struggling with the demand.

And that hospitals are "hoarding" ventilators: "I don't know if it's hoarding or worse than hoarding, but the media… https://t.co/L3HgasrGwX
— Shannon Watts (@Shannon Watts)1585520204.0

Not just for beds and ventilators, but for essentials too.

It's the hospital workers who are under the most threat.

While they take on COVID-19 by treating patients and saving lives, they are putting their own lives at risk.

This outcry for essential equipment has been heard all over.

There is a call for more donations as a Bristol tattoo shop repurposes masks and gloves on hand for distributing fo… https://t.co/uXybIEoaxf
— News 5 WCYB (@News 5 WCYB)1585524600.0

This is what urged former Knicks star, Stephon Marbury to go above and beyond by donating something every health worker on the front line should have.

The Big Apple needs this more than an NBA title.

Marbury played in the NBA for fourteen years.

He moved overseas to become a legend in the Chinese Basketball Association.

Marbury has made arrangements with a mask supplier in China.

The Coney Island native said he got the idea last week.

After learning about the lack of protective gear and the price masks have gone up to.

The retired, former point guard decided to change all that.

He reached out to Brooklyn Borough President, Eric Adams, to let him know he was ready to help.

During a call from his Beijing home, Marbury said...

“At the end of the day, I am from Brooklyn, this is something that is close and dear to my heart as far as being able to help New York."

It was important for him to help.

He said: “I have family there in Coney Island, a lot of family … who are affected by this, so I know how important it is for people to have masks during this time."

China is beginning to recover from the pandemic.

This means the country now has more N95 masks than it currently needs.

The gear will be given out 2 million at a time over 5 weeks.

Although, despite the good intentions, the efforts to connect with the local government have gone anything but smoothly.

There seems to be some confusion between the hospitals and the government.

Future the creator of the hit single, "Mask Off" is partnering with Atlanta Sewing Style to provide face masks to h… https://t.co/TmcF9J3zV4
— Everything Georgia (@Everything Georgia)1585589373.0

The state Department of Health spokeswoman had something different to say.

Why did the US Gov’t donate nearly 18 tons of medical equipment to China in February when the White House was warne… https://t.co/AsIhixPZ9b
— Joe Scarborough (@Joe Scarborough)1585510655.0

Jill Montag said she “had no idea who the borough president spoke to" and that the state officials “in charge" of buying masks  “want to talk to Stephon!"

Montag asked a reported for assistance in contacting Marbury.

The reporter then connected the Health Department with Adams' office since it was the direct line to be able to contact Marbury.

But the details after the first contact are murky, to say the least.

She forwarded the email to a reporter.

The email was from Adams along with a response from Daniel Symon, director of the Mayor’s Office of Contract Services. The note said: “Hello BP Adams. If the N95 check out, that is a decent price. If you’d like to put us in touch with the supplier directly, we’d be happy to vet this and move towards purchase."

However, Borough Hall is “open" to working with de Blasio’s team “and want to do whatever it takes to get these masks to our hospitals and first responders."

There is clearly a lack of communication.

🆘 USA 🇺🇸 are from today the most affected country by #COVID19 worldwide. This was easily predicted: large populati… https://t.co/1qyeD8JCEn
— Andrea Silenzi (@Andrea Silenzi)1585257938.0

Let's hope they can get things cleared up fast, so the right equipment can reach the correct people, before more unnecessary cases are recorded. Keep scrolling to hear how Harvey Weinstein is currently being held in self-isolation in New York Prison...