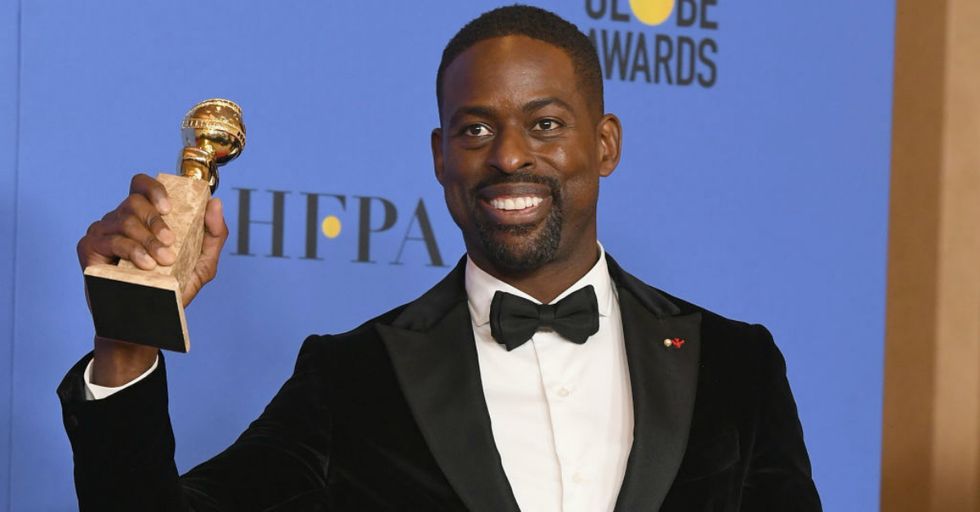 You've probably cried watching him as Randall Pearson on This is Us, and tonight at the Golden Globes, Sterling K. Brown won Best Actor in a Television Series for his role in the series. And while This is Us fans everywhere are probably jumping for joy, there's something else about his win that makes it even more exciting: it's historic!

Sterling K. Brown won a Golden Globe for Best Actor in a Television Series - Drama for his work in This is Us.

This is the first year he was nominated for a Golden Globe for the series along with his cast mate Chrissy Metz for Best Actress and the show itself for Best Drama.

With his win, he becomes the first black man to a Golden Globe for Best Actor in a Drama.

He made history! This is the Golden Globes 75th year and the first year a black man has won Best Actor in a television series.

He started his speech by just saying "Oprah!"

Which is probably what we would all do if we got up on stage and realized we were talking to Oprah.

In his speech he called out the series creator Dan Fogelman for specifically creating a role for a black man:

"I want to thank my [This Is Us] cast, as we take turns leading and supporting one another. To my network NBC...but also I want to thank [series creator] Dan Fogelman. I've benefited from colorblind casting [in the past]. But Dan, you wrote a role for a black man, that could only be played a black man. What I appreciate so much about this [award] is that I'm being seen for who I am, and I'm being appreciated for who I am. That makes it harder to dismiss me."

He also, no big deal, delivered his own child.

On the red carpet he told the story of how his wife Ryan Michelle Bathe gave birth unexpectedly at home and he had to be the one to deliver the baby, with only the help of their midwife over the phone. What a superstar! Congrats, Sterling!