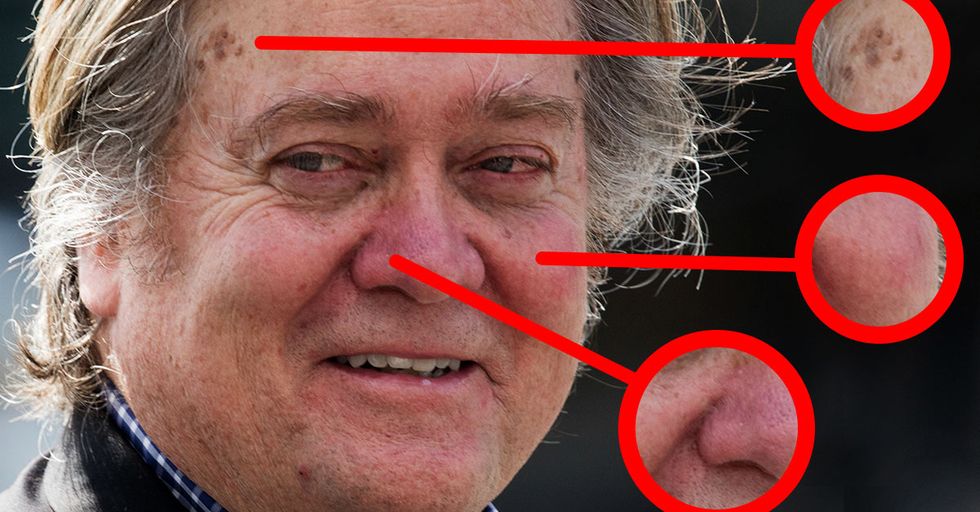 A Dermatologist Has Given a Detailed Breakdown of Steve Bannon's Face

There are a lot of mysteries surrounding the former White House strategist. But perhaps none more visible than the enigma of his very own face.

Steve Bannon is famous for many things: founding Breitbart, managing the successful campaign of Donald Trump, and owning a face that begs several questions.

To get to the bottom of what, exactly, is going on, The Tab enlisted the help of an actual dermatologist.

And sure enough, the man whose website has helped provide a big flashy platform for anti-Feminist, anti-gay, and anti-Semitic writers may have something to worry about.

"He just looks very unhealthy," Dr Gregory Buford told the website, over and over again.

It turns out Mr. Bannon's biggest problem is that he may not be spending enough time taking care of himself.

Dr. Buford points out that Bannon is "overweight, he's got a puffy face, which is suggestive of not a lot of sleep. He has probably made poor food choices. Looking at his face, we can see evidence of high levels of cortisol, the stress hormone."

There are a few reasons Bannon might not be sleeping so well.

For one thing, he seems to spend a lot of time being really angry. Stress levels are clearly very high. (Can't be fun to see yourself portrayed as the Grim Reaper on SNL, either.)

Dr. Buford warns that Bannon's problems may also not simply be cosmetic.

Noting "He's got a lot of changes on his face – sun damage," the doctor suggested that perhaps the strategist has failed to properly protect his own skin.

Considering he is rumored to have lived in Florida, this would make sense.

Though journalists have been unable to just where Steve Bannon has been residing these past few years, he is registered to vote in Florida, so it's assumed he spent some significant time there.

Although even a lack of sunscreen isn't quite enough to explain this whole...situation he has going on here.

"Looking at his face, we can see evidence of high levels of cortisol, the stress hormone." Buford said. Honestly maybe this guy just needs to log off the internet for a few?

Many of Bannon's skin issues can be attributed to a lack of rest.

As the doctor notes, "The redness is probably stress-related, he's not getting a lot of sleep. He's obviously under a lot of stress." He's like a walking embodiment of what can happen when your whole personality is just angry internet comments.

Though many have attributed Bannon's appearance to an alcohol problem, Dr. Buford says there's no real reason to suspect it as the root cause. "People with rosacea have dilation of the blood vessels, so it would be a stretch to call him out as an alcoholic. He just looks very unhealthy."

Ultimately, you don't need a medical profession to see that what Bannon really needs is to rethink his choices.

As Buford put it, "I'd put it down to overall more of a compendium of bad lifestyle choices." Which, yes, I don't think you'd find many people who'd disagree that Bannon could deal with a lifestyle change.

With sunscreen, of course. Lots and lots of sunscreen.

But then again, if Bannon is even reading this, he's very unlikely to take my advice.

I'm just some random woman with control over her reproductive cycle. But hey, it helps keep my skin clear.