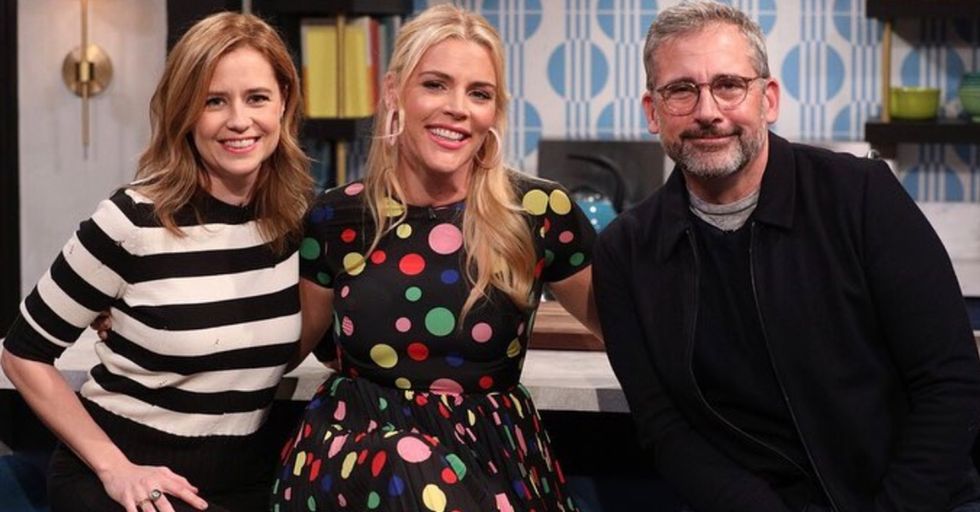 The Office is one of those iconic comedy shows we'll never forget. Even if you haven't watched it, you've seen clips of it – but odds are, you've watched it. And fans of The Office will know that birthdays are of utmost importance to the staff of Dunder Mifflin. The party planning committee had their work cut out for them!

Now, Jenna Fischer (the wonderful actress who played Pam Beesly) has a birthday coming up in March. So naturally, her Office co-stars are ready to celebrate. And the first in line was Michael Scott--Steve Carell himself!

Check out the fun this amazing cast continues to have, years after The Office has ended. And stay tuned until the end of the article for the video of Jenna's adorable birthday surprise!

You guys, it's almost Pam's birthday.

Jenna Fischer is celebrating her 45th birthday on March 7th! It's right around the corner.

And if you remember, Dunder Mifflin knew how to party.

With an official 'party planning committee' and a Dwight K. Schrute, what could go wrong?

But nobody partied harder than Michael Scott.

Because as Michael knew, offices are a place of joy; not a place to spend meaningless hours working.

Which is why office birthdays were off the wall.

But for Michael, birthdays had to be perfect.

Because when they weren't, he got REAL sulky.

Heck, even just the parties he took charge of had to be amazing.

Oh, the Christmases they had in that office. There are too many amazing moments to list out.

And Michael knew how to get a party pumpin'.

(Spoiler alert: Michael is referring to the fifteen bottles of vodka that he had bought.)

Even when his workers had other ideas.

Nothing was more important than presents.

In the wise words of Michael Scott: "It's like this tangible thing that you can point to and say, 'Hey, man, I love you this many dollars' worth.'"

So, Steve Carell gave Jenna Fischer a pretty awesome one.

And I guess it's no surprise after his character got so good at delivering surprises, that Carell took a shine to it!

Of course, other costars got Jenna presents too.

Did you know that members of The Office cast are actually really close IRL?

It may surprise you, but Kinsey (who played Angela Martin) and Fischer are genuinely the best of friends--and it's super adorable.

Or this outing that Jenna went on with Oscar Nunez!

No work, just ice skating before Christmas! And it looks like it was a blast.

And look at this receptionist's brunch!

Plus, John Krasinski and Jenna are still bringing the JAM!

Ooh, and there are the girls' nights out!

The ladies of the office even celebrated at Jenna's real life bachelorette party (she and husband Lee Kirk married in 2010).

Yeah, that was mostly because Pam was pregnant, so she and Kevin made an excuse to "pig out together," but it's nice to see they still keep up the tradition in one form or another!

In fact, there have been whole reunion brunches!

It's honestly great to see that so many cast members in The Office left having truly enjoyed their time together!

Not to mention that great SNL mini-reunion.

When Steve Carell hosts, all his office buddies come out to have a good time!

And the Finer Things Club reunion!

Ah, yes, the Finer Things Club. It's good to see they've been keeping up attendance at meetings!

So the other day, Jenna Fischer went on the 'Busy Tonight' show.

And host Busy Philipps decided to have some of Jenna's Office co-stars send gifts to celebrate an early birthday!

And then, this happened.

Yes indeed, folks, that is Steve Carell popping out of a box to give Jenna Fischer a birthday surprise.

All in all, a pretty great time.

And yet again, it's a testament to how tight The Office cast is that Steve wanted to hide in a box for Jenna's birthday.

And the pair of them had another chat before the segment ended!

And Jenna Fischer even posted about it afterward!

Despite nearly having a heart attack (by the looks of it, anyway), she loved her present!

SO MUCH FRIENDSHIP, YOU GUYS.

I'm not crying, you're crying (and actually, Jenna's kind of crying too!)

Both in our hearts and in each other's!

Here's to many 'Office' cast reunions in the years to come!

Psssst. The reunion special, anyone? We'll still be glad when they just hang out...but really, how great would that be?!

She stole our hearts as Pam Beesly, and she's just as adorable now! Share this birthday fun with all the other Office fans you know!