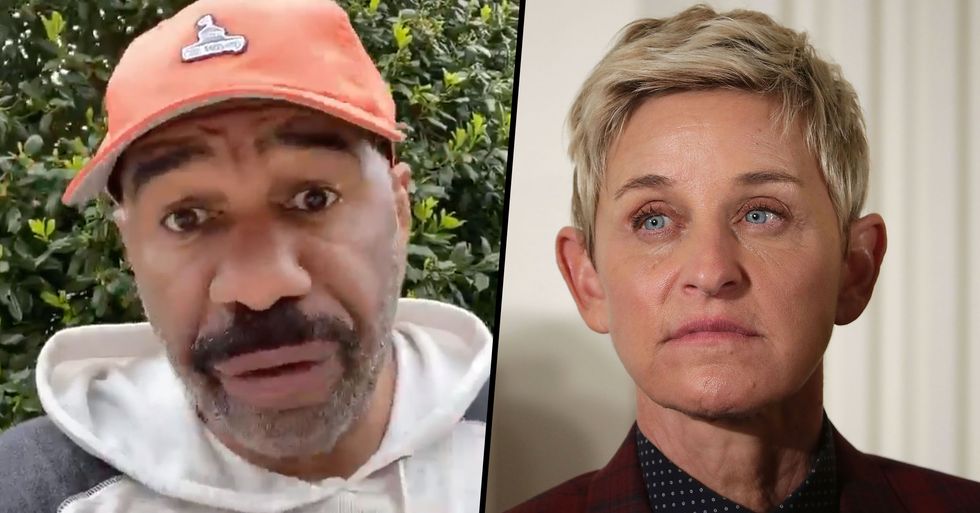 It looks like there are actually people out there who believe Ellen DeGeneres during this career-destroying scandal...

It seems that not everybody believes the accusations that are being made about the infamous Ellen DeGeneres.

Steve Harvey has spoken out and has defended the TV host amid the cruelty scandal that has been dampening her bubbly and kind reputation.

Now, these allegations didn't come as much of a surprise to most of us...

Because, for years now, rumors about Ellen's true personality have been rife. Though she has built her on-screen persona around being outspoken against injustice and generous to the needy, many people have claimed that, in real life, she is quite the opposite.

With previous seasons of the show raking in an average of 4.5 million viewers. But, a couple of months ago, The Ellen Show had its season-low rating of around 1.5.

As reports in July claimed that The Ellen Show was officially under investigation.

The show was investigated for racism, mistreatment, and intimidation on set.

WarnerMedia, who own and syndicate the show, were believed to be the ones to launch the internal investigation into what’s happening behind the scenes.

And, in light of all this backlash...

The host issued an apology to her staff working on the show.

Ellen wrote a later to her staff where she said that the culture behind the scenes was not a reflection of the values she started the show with, and vowed to do better in the future.

“On day one of our show, I told everyone in our first meeting that The Ellen DeGeneres Show would be a place of happiness – no one would ever raise their voice, and everyone would be treated with respect," the talk show host wrote in a letter to her staff.

Ellen went on to say that as the show grew, she was not “able to stay on top of everything.“

And “relied on others to do their jobs as they knew I’d want them done. Clearly some didn’t."

But, despite her grovelling apology...

Yet another accusation has arisen, and it could very well be the worst yet.

A former staffer has come forward with a grim insight into life on The Ellen Show...

In which it was compared to a "military boot camp."

Speaking to the Daily Mail, the former employee recalled how Ellen would "take pleasure" in firing staff members...

As well as barking orders and tormenting employees over tiny errors. Her alleged behavior sounded simply unbearable, and according to the source, workers were hit with an itemized daily list of gripes from serving food in the wrong bowl, leaving the salt shaker in the wrong place, or failing to ensure her latte was frothed the way she liked it.

"Ellen was the worst person that I’ve ever met in my life. She takes pleasure in firing people."

"Sometimes she would yell at us but it was more about the incredibly condescending tone she would use. She treated you like you were nothing. She was going to torture you and you were just going to sit there and listen to it because you were being paid."

How on earth will Ellen bounce back from all of these terrible accusations?

We're not sure she will... but the one thing that is for certain is that she has a tight support circle.

And now, that support circle has spoken out.

Comedian, Steve Harvey, is a big supporter of Ellen, and he has now spoken out to defend the talk-show host.

In a recent interview with People The TV Show, Steve was asked about his opinion on the whole scandal.

He said: "I'm going to say this about it: Ellen DeGeneres, the person that I know, that I've known for a number of years, that I saw back in the comedy club days, when we used to split time with the same management, all of this and what's happening now, Ellen, the person, is probably one of the coolest and kindest people I've met in this business."

Steve has been friends with Ellen for years now...

And he decided to point out that she "doesn't have racist tendencies." "I'm a 63-year-old black man. I've been black the entire time. I ain't took no days off. I ain't experimented with nothing else...I know racism. If I have a conversation with you, I know if you got racist tendencies somewhere in you, because it radiates. I can feel it... That's not Ellen DeGeneres. That's just not her, period. You make it like that if you want to. But if you try to make it that way, it's because you don't know her. I know her. And that's the feeling I have."

Steve then disclosed that he's been in regular contact with Ellen since the scandal broke.

"I've told her, keep your head up. We've texted each other. But my first advice was Ellen got enough money to walk away. But, we're in the cancel culture right now, man, everybody wants to see everybody fall down, man. What happened, man?" he said.

Make sure to stay posted for further updates on the Ellen DeGeneres scandal.

For more, keep reading to see why the internet was torn over a picture of Ellen and George Bush...