Steve Jobs Is Alive and Living in Egypt, According to Conspiracy Theorists | 22 Words 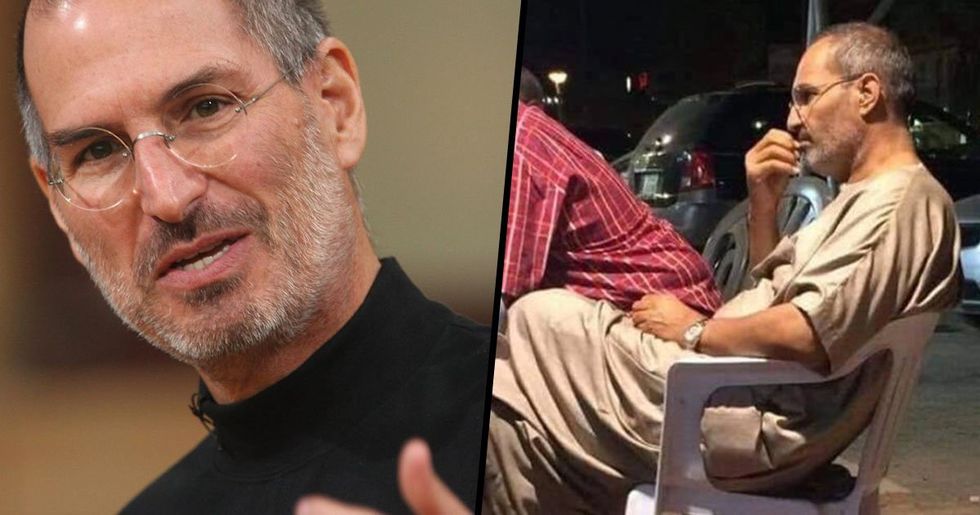 Steve Jobs Is Alive and Living in Egypt, According to Conspiracy Theorists

Here's something to get you out of bed. A good ol' conspiracy theory. It seems as if, nowadays, this world cannot function without the revelation of a brand-new, slightly exaggerated, version of a rumor. I mean, I get it, conspiracy theories are a good way to kill some time, but, for those who get too invested into it, it becomes an unhealthy obsession.

Recently, someone claimed that they had spotted Steve Jobs just lounging around in Egypt and now the internet is completely convinced that he is, in fact, still alive...

Apple has always been the center of conspiracy theories.

I mean, being the only company in history to gain a market value of more than 1 trillion dollars, you would think that there must be some strange workings within the company, right?

Do you remember the whole thing surrounding the Apple update?

Apple finally admitted one of its long-standing conspiracies to be true. People had been claiming that the tech giant purposefully makes their phones slower over time, so that people are more likely to update to a newer model.

And, apparently, it's true!

But they had a better reason for the bug, as opposed to them just trying to scam more money from customers, they said that they slow down the phones in an attempt to protect its internal components. Apparently, the batteries in iPhones degrade over time, which can sometimes cause phones to unexpectedly shut down. How annoying!

But this particular theory only involves the creator of the brand...

I don't know what's up with the world, but we seem to be fascinated with the idea that dead people are really alive and vice versa. Take Elvis Presley, for example. Many people still believe that he's alive. The theory that Osama Bin Laden is buried under the sea still irks me and, most recently, the whole Area 51 charade.

I still believe that the government is hiding aliens from us, but everything else is a bit debatable.

If someone has died, they've died. That's the end of that. But many are sure that there's more to the story... let's investigate.

If there's one thing that we know to be a fact, it's that Steve Jobs died back in 2011.

The creator of Apple took the world by storm with the creation of the iPhone.

After his passing, Timothy Donald Cook took over from the position, making sure that the company was running smoothly, and we have seen the invention of any new gadgets since.

However, some people are convinced that Jobs is actually still alive...

And that he is running the whole operation from a more remote location, where no one can recognize him.

It seems like a bit of a push, doesn't it?

I wasn't convinced until I saw the picture, and then it all started to make sense...

It was reported that Jobs died due to a long-term illness.

His health started deteriorating early on in 2011 and by the time that October came around, his battle with pancreatic cancer was over. The survival rate of the disease is pretty low, to begin with and Steve knew this.

The world was left devastated at the loss of such an influential soul.

And hearing the reports that he uttered the words "oh wow, oh wow, oh wow" before he died only made the whole thing way more difficult to stomach.

A Reddit thread was the catalyst in this major rumor and now people are coming up with their own theories as to why it might be true.

Apparently, someone had spotted Jobs in Egypt.

Out of all places, in Egypt? Is that really the place where people go when they've died but not actually died?

But one person pointed out that Jobs actually had a special place in his heart for Egypt...

But does that mean that if he was still alive, he would choose to retire there? Someone else mentioned that it would be a nice, quiet place to live, away from the hubbub of his old life. I guess that kind of makes sense...

Some others claimed that it was merely just a doppelgänger of the tech wizard.

But not everyone is convinced because the likeness too uncanny for it to not to be the real Steve Jobs.

He's even got the pose down to a tee!

You know the pose I'm talking about, right? The one where he's looking inquisitive, with a hand on his chin. The photograph shows him mimicking that exact pose and it's almost scary how similar this guy looks.

This was the picture that sparked the entire debate:

The title of the Reddit post was: "Steve Jobs hiding in Egypt after faking his death." There are no further details of when the photo was taken, where, exactly, or who decided to take it.

But, for some, the very picture was enough to prove that something weird was going on...

The shot fits with the theory that he's trying to live a quiet and simple life away from his typically busy one. As you can see, he has given up his signature black turtle neck for a beige robe and some sandals. A classic combo. It would be too hot to wear a turtle neck in Egypt.

The only thing that's really bothering people is the fact that he's wearing an analog watch...

Some people questioned why he was wearing a regular watch, instead of an official Apple Watch. But there's a simple explanation for that, of course. You can easily trace an Apple Watch's location, but Jobs is trying to remain undercover, so he's swapped the trendy gadget for a classic... duh!

And, if you just can't get enough of these conspiracies, then, boy, do I have a treat for you!

We've compiled a list of crazy conspiracy theories that actually turned out to be true for your scrolling pleasure. Enjoy!