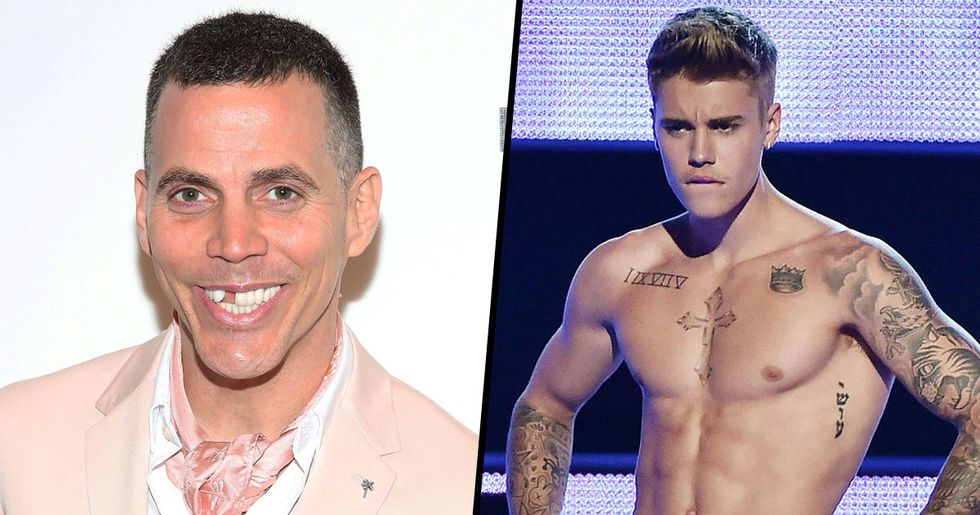 Hollywood is far from short of celebrity feuds, and a good old fashioned bit of drama between two stars is usually the hottest gossip of the showbiz world. Whether it goes down via social media or is a drunken mishap in front of a sea of paparazzi, everyone loves to spill the tea on a classic celeb fallout.

The best feuds, however, are the ones that we are least likely to expect. The most random and unexpected of tiffs are guaranteed to ruffle the feathers of Hollywood, and our very own beloved Biebs is in the center of attention in this story. Shocker!

In classic Bieber style, the pop sensation has caught the world's attention by making a very bold statement which, let's face it, he's more than likely going to regret when it comes to paying the consequences for this cocky attitude... And, with a new challenger on the horizon, there's almost definitely going to be a feud that we're not going to be forgetting any time soon on its way.

Let's be super honest with ourselves here. It's really not that much of a shock that Justin Beiber has taken to Twitter with an outrageous and ridiculous statement that's got everyone thinking... "what the hell?".

He's no stranger to drama online.

The Canadian pop star is well known for his dramatic nature and over-confident attitude, and his social media accounts certainly enhance these traits. From going on spontaneous Twitter outbursts to announcing his marriage to supermodel, Hailey Baldwin, on Instagram, Biebs never fails to disappoint his loyal following of "Beliebers".

The Biebs, who is best known for his pop songs such as "Baby" (2010), took to Instagram in March this year to announce a "break from music," and went on to explain that he was taking time out to focus on himself and his mental health.

He's had no breaks from social media, however.

The break in music doesn't mean that Justin is off the map, of course. He's certainly made his presence known via social media, and his most recent Twitter rant is absolute gold.

He challenging Tom Cruise to an MMA fight...

I wanna challenge Tom Cruise to fight in the octagon. Tom if you dont take this fight your scared and you will neve… https://t.co/KsGJQ003Mh
— Justin Bieber (@Justin Bieber)1560126855.0

Bieber's most recent celeb feud has been confirmed via Twitter, with the twenty-five-year-old challenging fifty-six-year-old actor to an MMA style fight in the octogon. Why he's done this it is not yet known - and probably never will be.

Everyone is asking the same question.

Where on earth has this come from, Justin?

He seems to be serious.

The young and (clearly) ignorant singer even mentioned Dana White in his tweet. Dana White is the president of the Ultimate Fighting Championship, which is the largest MMA organization in the world. It will be interesting to see if White will get involved with this absolutely ridiculous suggestion...

Could it be a religious matter?

Justin often refers to his Christianity on Instagram and Twitter, and with Cruise being a well known Scientologist, it has been speculated that the vast differences in religion may be a contributing factor as to why Justin has made this bizarre request.

If this is the case, I feel I won't be alone in judging Bieber massively on this decision.

Perhaps the most ludicrous thing about the call-out is the age difference. Fighting a man who is thirty years older doesn't seem like the best idea. It also doesn't help that Cruise is known to have done the majority of his own stunts in his movies, suggesting he's a pretty tough guy.

The internet seems keen on the idea, however.

Purely for the fact that people are dying to see Biebs get his ass kicked by the Mission Impossible star.

Saying it as it is.

Bieber has been called out various times online since posting the tweet, which will hopefully put things into a little perspective for him... maybe?

Justin's statement hasn't gone down as well as he probably expected...

The internet is definitely taking sides here with Cruise's side currently posing as the winner, whilst Biebs is pretty much a laughing stock on Twitter right now...

If Tom Cruise is man enough to accept this challenge, McGregor Sports and Entertainment will host the bout. Does Cr… https://t.co/WeoWJRkzl9
— Conor McGregor (@Conor McGregor)1560130420.0

But it seems that there are some out there taking Bieber's side, one of those supporters being Irish MMA fighter, Conor McGregor.

It appears that some really want this fight to happen...

McGregor went about the situation in his typical outspoken fashion, claiming Cruise needs to be "man enough" to take on the fight. Sorry, but I don't personally see how having a fight with someone thirty years younger than yourself is the definition of "being man enough"?

McGregor went on to follow in Bieber's footsteps by proposing a fight of his own, but with actor and well-known fitness enthusiast, Mark Wahlberg.

A bit too much testosterone, anybody?

Is it just me or has Twitter just experienced an overload of testosterone? What is with all the fighting?!

But in classic McGregor fashion...

I highly doubt that we will see the day when McGregor goes head-to-head with Wahlberg; this is just another example of McGregor's trash talk, ladies and gentlemen.

But with Biebs and Cruise, however...

Tom Cruise hasn't yet come forward with a statement regarding the proposed fight, but we aren't pinning our hopes on this fight actually taking place.

We wonder whether it will happen...

I mean, if it does, it'll be absolutely hilarious.

And just when you thought it was all over...

There's been an additional challenge hurled towards Bieber from none other than the man himself, Steve-O.

We all know Steve-O from his hilarious role in Jackass and his crazy stunts on YouTube.

And Steve-O is a man known for his wild side, so we weren't all that surprised when we found out that he wanted a slice of the action.

Though the reasons behind his proposal were pretty funny...

Steve-O was pretty upset that he wasn't involved in the initial challenge.

He decided to call Bieber out, saying, "I think you've been picking a fight with the wrong guy. Tom Cruise might be 56, but, hey, I'm 45!" I don't think this one is going to come down to age, Steve-O. I mean, it's all well and good issuing a challenge, but will he actually be able to follow through?

If you're finding all of this hard to believe, like I am, Steve-O's got some news for you.

Apparently, the Jackass actor is so serious about this fight, that he personally flew out to Las Vegas to have a conversation about the whole thing with Dana White herself.

And White's all hyped about it too, apparently.

Steve-O mentioned that they "shook on it," so... well, we guess we'll have to wait to see what happens!

Let's just hope that Bieber doesn't get the upper hand on him, like these jellyfish did...

I think I'm backing Bieber on this one...

The Octagon is a brutal place, but Steve-O says he "won't back down."

So it looks as if we're going to be extremely entertained if this fight actually happens and you know what? I'm kind of hoping that it does, just to see if the actor can actually pursue a career in the world of fighting.

Hold onto your hats, the only thing that Steve-O is waiting for is the nod of approval from Bieber.

If the fight between Bieber and Cruise doesn't work out, it seems as if there is an eager replacement waiting in the wings for his opportunity to shine.

Need more proof? Hear it all from the man himself!

He seems pretty confident about it, telling the reporter that he doesn't know if he can beat Justin Bieber, but that what he does know is that he can "take a beating." All we now need is for Bieber to approve and we'll all be in for a hell of a show.