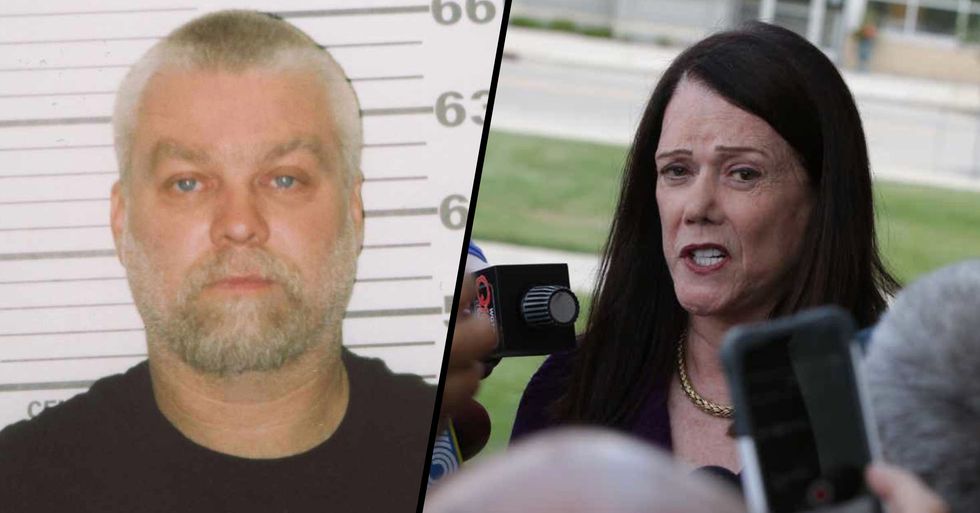 Millions of viewers watched Netflix's Making a Murderer on the edge of their seats. The documentary series tells the story of Steven Avery, who was falsely convicted of a sexual assault in Wisconsin in 1985. After he was exonerated, he was set to sue authorities for millions of dollars - until he was quickly put back behind bars, this time for murder.

But, for many, the case against Avery (alongside his nephew, Brendan Dassey) for the murder of Teresa Halbach is sketchy at best. The second series of the show depicted famous lawyer, Kathleen Zellner, reworking his case in order to exonerate him.

The latest development in the case looks like it could be a massive turning point - and now, lawyer Kathleen Zellner has spoken out.

And it immediately became an absolute sensation, with people all over the world quickly gaining their own opinion on what actually went down.

It tells the story of one Steven Avery.

The Avery family were famous in Manitowoc County, Wisconsin, thanks to their large auto-salvage. But, the police were known to have a dislike for them.

In 1985, Avery was arrested for sexual assault.

He served eighteen years behind bars for the crime - but it was later revealed that he was falsely convicted. Many believe the authorities bungled the case and framed Avery for the crime.

Avery was found innocent and released.

But he was set to sue Manitowoc County authorities for the eighteen years of his life their incompetence had cost him.

Which makes what happened next look all the more suspicious...

But many details of the case seem a little dodgy.

For example, the fact it took police multiple searches to discover Avery's car key, which was supposedly simply lying on the floor of his apartment.

Many of these details were highlighted in the 2015 documentary.

Another huge issue with the case was the fact that it appeared as though the Avery 1895 blood sample had been tampered with. It's speculated that this blood was used to frame Avery for Halbach's murder.

But perhaps the most damning evidence?

Footage of the Manitowoc County police very clearly trying to coerce a confession out of Avery's low-IQ nephew, Brendan Dassey, made for very uncomfortable viewing.

After the 2015 documentary dropped, there was a public outcry.

Making a Murderer 2 dropped in 2018, and followed the story since the massive public attention the first season had brought to both Avery and Dassey's cases.

Dassey's appeal process has been lengthy.

While there's some (albeit suspicious) physical evidence against Avery, Dassey's conviction rests predominantly on his confession - which is now widely believed to be false.

Avery's case was taken over by powerhouse, Kathleen Zellner.

Zellner has made it her life's mission to ensure that Avery gets exonerated for the crime and is allowed his freedom once more.

The series follows her innovative methods to prove Avery's innocence.

This includes an experimental new style of lie detector test, which claims to show no brain activity in areas of the brain that would suggest that Avery is lying about his lack of involvement.

Zellner has other methods, too.

She's aiming to prove that Manitowoc County police zeroed in on Avery and ignored potential other leads which could have helped them solve the case.

Zellner also made this controversial move.

She's offered a huge reward to anyone who has information that could lead to the conviction of who she believes to be the true killer.

The 2 seasons of Making a Murderer deeply affected many.

This includes filmmaker, Shawn Rech, who told Newsweek that he admitted he felt "angry with law enforcement" and "embarrassed as an American" after watching.

So Rech started doing his own research.

And while doing so, he began to feel misled by the Netflix show. So much so, in fact, that he decided to make his own series, Convicting a Murderer, containing all the information that he believes Netflix left out.

But, in his investigation, Rech has come upon something pretty shocking.

The director claims that he has received a full confession to the murder of Teresa Halbach from someone other than Avery or Dassey.

He spoke to Newsweek about the shock revelation:

"We haven’t confirmed the legitimacy of the confession, but seeing as it was given by a notable convicted murderer from Wisconsin, we feel responsible to deliver any and all possible evidence to law enforcement and legal teams."

"Having been in production for twenty months, we’ve uncovered an unfathomable amount of information and evidence that is leading us to the truth. Our investigation does not end here."

Depending on what happens next, there could be some far-reaching consequences.

If the confession proves to be valid, it could mean exoneration for Avery, who is sentenced to life in prison, and Dassey, who isn't up for parole until 2048.

Zellner has spoken out about this shock revelation.

Zellner’s law firm told Heavy: "The inmate's name is familiar to us but I do not want to release it yet. We were contacted a week ago by the inmate. He mailed the handwritten confession to us before he contacted the production company."

Zellner also took to Twitter to talk about the update.

We received the handwritten confession on Saturday. It is worthless unless it is corroborated. #MakingAMurderer2 #WorkingOnIt #NotsoFast
— Kathleen Zellner (@Kathleen Zellner)1569283363.0

While she isn't writing it off completely, she also doesn't seem hugely hopeful that it'll be what's needed to exonerate Avery.

Another unexpected source has spoken up.

Ken Kratz, who basically took on the role of the villain in the Making a Murderer series, has also thrown his opinion into the ring.

Zellner has been very skeptical about the confession.

The superstar lawyer retweeted an article in which she claims there's "no credibility" to the new confession.

She then went a step further.

Let’s see. You be the judge of the credibility of this confession. #MakingaMurderer #TruthWins https://t.co/NOEJtrrmb3
— Kathleen Zellner (@Kathleen Zellner)1569356095.0

Zellner actually tweeted images of the scrawled confession to her hundreds of thousands of followers.

The confession is garbled, contains mostly information from the popular Netflix documentary, and generally seems to be essentially useless in terms of advancing the case.

The writer of the confession has also been revealed.

This is Joseph Evans, the man who has offered the "information" about Teresa Halbach's murder. He's a convicted killer in prison in Wisconsin.

The Wisconsin Department of Justice has also voiced concerns about the "confession."

"The Wisconsin Department of Justice has received the new information related to the case. DOJ takes all credible reports seriously, but it’s important to note that this new information directly contradicts information previously provided by the same individual," a spokesperson told Action 2 News.

Zellner also had this to say.

Avery tips: our investigators are checking out the credible ones and disregarding the ones w/o corroboration— just… https://t.co/1iOfai2Zwo
— Kathleen Zellner (@Kathleen Zellner)1569276380.0

She implicitly criticizes the original investigation of the case and says she investigates leads before disregarding the uncredible ones.

She also makes this point.

It does seem a little coincidental that this confession came in almost immediately after Zellner's reward offer went public.

Whether the confession is credible or not...

Zellner seems set to stop at nothing to get to the truth of this case.

Zellner has left followers of the story with a message of hope.

To Steven’s followers: Do not be discouraged by recent events. We have some very credible tips and when verified we… https://t.co/QUirKpldDE
— Kathleen Zellner (@Kathleen Zellner)1569377714.0

The fact that this lead has turned out to be false doesn't mean every lead will, after all.

We'll have to keep you updated on what happens with this fascinating case.

We're eagerly awaiting the drop of Convicting a Murderer, which is supposedly set for 2020.

But if you can't wait for the drop, keep scrolling for another Netflix true-crime smash.

It's had viewers glued to their screens...