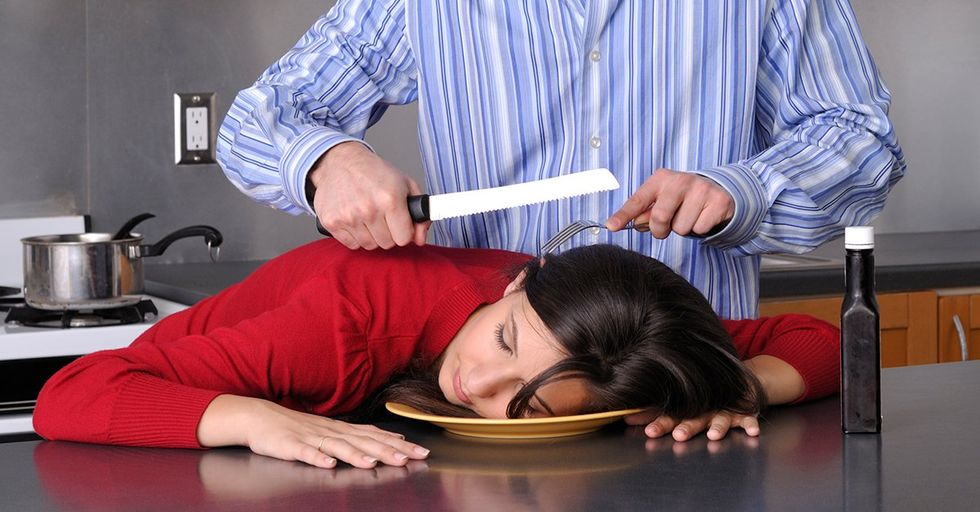 Luckily, the Twitter account @darkstockphotos exists to point out all the weird and disturbing stock photos out there.

Some of these are straight up bonkers.

Others might take you a second to figure out what's going on. And others, still, just make no sense no matter how long you stare at them.

Call me crazy, but I don't think this is how surgery is supposed to work. I love that the expression of the guy in the middle is like, "Oh shucks! Caught again by murderous surgeons!"

Why are this kid's grandparents smiling wildly while he points a gun at them? Is this some sort of cult? Blink once for yes, twice for no.

I remember the good ol' days when we would all sit on the couch. Dad would drink a giant glass of vodka, I would watch TV, and mom would smoke crack in the middle.

Folks, believe me when I say it only gets weirder from here on out. The next one is tragic on so many levels.

If you text while you drive, you will run over a child who just wanted to get their ball from the middle of the street. Can't you hear them yelling?!

OK, so from what I gather, there's a fight going on in the school hallway and no one's doing anything to stop it. In fact, one kid is videotaping it to play for his friends later. Cool.

I bet the people who invented the face swap technology never anticipated that it would be used for evil like this. Who needs this stock photo?!?!!

I think this is a metaphor. I don't know what it's a metaphor for, but it has to be a metaphor because it doesn't make sense otherwise.

"You ever get to the point where the job just doesn't fulfill you anymore? I've killed 19 people, but I think the spark is gone. It just doesn't thrill me like it used to." The next one is truly unexplainable.

Is this woman being held hostage in an empty office building? Is this a Die Hard situation? Perhaps Dwayne "The Rock" Johnson can come save her.

Contrary to what it looks like, this isn't actually a baby thief. The baby is just so sensitive to sound, so her dad covered his mouth to prevent his breathing from waking her up. It's really a wholesome photo.

Well, there's no sugar-coating this photo. This guy has a gun. I don't know why he's so upset, though. He has a very lovely home.

I have three questions about this photo: WHAT? WHY? WHYYYYYYYY THOUGH?

I! Just! Don't! Know! Anymore! The next one is confusing, but like, in an awesome way.

That's what you get for riding bicycles instead of Segways, like this brilliant murderer on the left. Oh yeah, she 100 percent murdered those cyclists.

Was just thinking that I needed to buy a loaf of bread and some lettuce to put my foot in. It looks comfy.

Let's be honest, Tim, you're just playing the role of a cannibal. Everyone knows this isn't how you cook and prepare human. You're a poser, Tim. Admit it.

There's a gun in my spaghetti!

Honestly, I eat so fast I didn't even realize it was there until it went off and shattered the restaurant's aquarium.

"Please, ax murderer, please! Just kill us, so we don't have to look at any more of these stupid stock photos!" Share this with someone who needs a laugh!