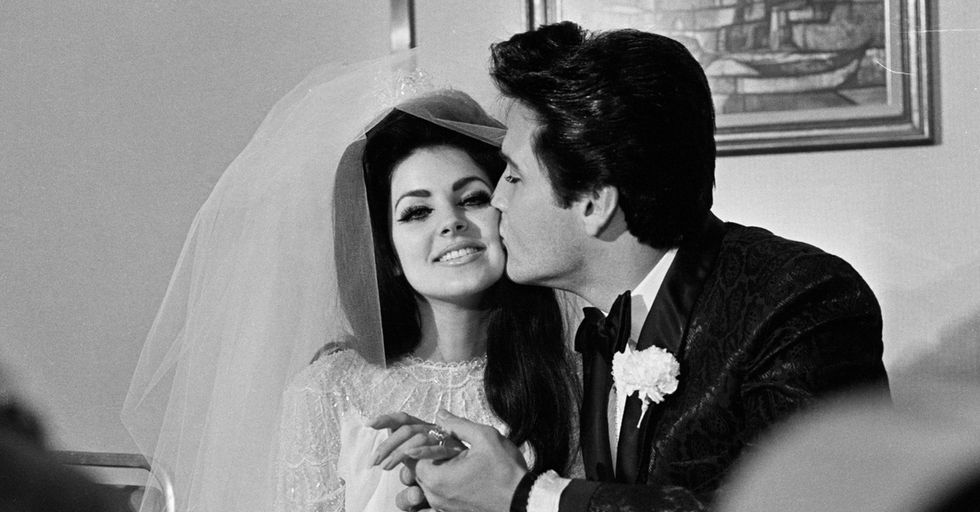 Stories of Celebrities Who Hid Their Relationships With Minors

Celebrity couples have always been a topic of fascination, whether they're high profile like Brad and Angelina, or just freaking insane like Ariana Grande and Pete Davidson, we can't help ourselves but become completely obsessed. But a lot of times those relationships are, well to put it plainly, illegal. A lot of celebs have dark secrets they wish didn't stain their Wikipedia pages, but guess what, we love Wikipedia, so we're going to talk about it.

We put together a list of 15 celebrities (or 30 if you count their other halves) that have been in "illegal" relationships with minors. Often times keeping them a secret until their 18th birthday. And hey, stick around until the end because we have a couple more relationships that are even weirder.

Elvis and Priscilla first met in Germany in 1959 while Elvis was serving in the army. Elvis became quickly infatuated with her, and the two eventually moved in together before getting married eight years later.

For a short time between 1975 and 1976, after divorcing Elvis, the two dated before Robert married Kris Jenner.

While staring in his self-titled sitcom, Seinfeld began dating then-high schooler Shoshanna Lonstein who was living in New York at the time.

Lonstein even moved to Los Angeles to be closer to Seinfeld while she attended college.

She left George Washington University and transferred to UCLA to finish her degree while dating the comedian. The couple eventually broke up, and Lonstein moved back to New York to pursue a career in fashion.

Rumors of a relationship between the two Heroes co-stars first started after an Emmy party back in 2007 when Panettiere was only 17. The two came forward with their relationship after her 18th birthday.

The pair split after dating for two years.

Panettiere went on to date heavyweight boxer Wladimir Klitschko later that year. Klitschko and Panettiere have a 13 year age gap. She later told The Telegraph, “It was never a case of me making a decision, saying, ‘I want to date older men,’ But I am drawn to people who make me up my game, who bring me up to their level. I want to be with somebody who is more worldly than me."

Does anyone remember when the Good Charlotte frontman and Hilary Duff dated in the mid-2000s? The two got together right after Hilary Duff wrapped on Lizzie McGuire and dated for two years.

They broke up after Duff turned 18.

Which is a little gross, but sometimes relationships don’t last. Especially when there’s a 10-year age gap between each other. Everything seemed to turn out okay in the end, as Joel Madden married Nicole Richie, and Hilary Duff is dating musician Matthew Koma.

Okay, do we even need to talk about this one? I mean, even Drake put it in a song. They first started popping up in each other's Instagram posts after becoming friends at Kendall Jenner's birthday party when Kylie was just 14! This fueled all kinds of speculation about their relationship, which Kanye spilled the beans on in a radio interview.

The two dated on and off and now Kylie is dating Travis Scott.

Kylie and Travis had their first child together in February 2018. Kylie is just 21, and Travis Scott turns 27 next year.

Ah, Chad Michael Murray. He is the guy that every girl in my high school wanted to lose their virginity to. And for one lucky high schooler, that dream came true. Kenzie was an extra on One Tree Hill, right after Murray and Sophia Bush split up. So that must have been awkward since a year later they were engaged.

But they ultimately called off their relationship in 2013. In 2015 Murray married another one of his co-stars, Sarah Roemer, and they're still together with two kids.

I'm sure you're asking yourself, "who are these two old people on my screen?" One of those people is Celine Dion, and the other is her late husband, Rene Angelil. The two married when Dion was 26. So what's the big deal?

Angelil started as her music manager when Celine was only 12 years old.

Though to be fair, they were married for 22 years until Angelil died in 2016. Their relationship in total lasted 35 years and they had three children.

Alright, so not exactly a minor, but we couldn't make this list without Woody Allen. For those that don't know, in 1997 Woody Allen married his adopted daughter-in-law. The two started a relationship while Allen was married to Soon-Yi's adopted mother, Mia Farrow.

This family is a sexual mystery. There is also speculation that Ronan Farrow isn't even Woody Allen's biological son at all, and is instead the son of Mia Farrow's ex-husband Frank Sinatra. Why do celebrities only date celebrities?

Who's this French guy and why do I care?? Luc Besson is the director of such classics as Léon: The Professional, The Fifth Element, Taken, and Lucy.

Besson claims their relationship is what inspired his movie Leon: The Professional, starring a then-12-year-old Natalie Portman.

The two got married and had a child together, but split when Besson got involved with a then 22-year-old Milla Jovovich on the set of The Fifth Element when Besson was 38.

Oh, Lindsay. You were so great in the late-90s and early-00s, what happened? Oh, maybe you started dating guys 7-years older than you when you were starring in Freaky Friday. That 70s Show wasn't even that great of a tv show. Don't @ me.

Their split may have lead to Lindsay's issues after Mean Girls.

According to a Vanity Fair article published in 2006, Lohan took the breakup hard. It probably didn't help that the couple kept their relationship a secret until Lohan's 18th birthday.

This one is crazy. The Rolling Stones bassist started a relationship with Mandy Smith when she was just 13 years old. That places her firmly in 7th grade while Wyman had already been married and divorced once.

Mandy's mom thought Wyman was acting as a "father figure" but in reality, they had sex for the first time when she was 14.

According to an interview with The Daily Mail, Mandy slowly started to realize that their relationship was "wrong." The couple married when she was 18 and got a divorce two years later.

R. Kelly, why are you like this? In 1994, 27-year-old Kelly and Aaliyah held a secret marriage, because it was illegal. In fact, according to Kelly's manager, they even falsified some documents for Aaliyah claiming she was actually 18.

Guess what? It didn't last.

The marriage was annulled 6-months later because, you guessed it, it was illegal. Aaliyah had the marriage records expunged. Kelly has since been accused of all kinds of sexual misconduct including "running a [sexual] 'cult'" and knowingly infecting someone with an STD.

Okay, so Taylor wasn't exactly a minor, but I feel like everyone thought these two were a super cute couple at the time despite being 13 years apart. For anyone that needs a refresher, the two never confirmed they were dating, but Taylor featured on Mayer's 2009 album Battle Studies, and in 2010 Swift released the song Dear John that is widely believed to be about their breakup.

John Mayer actually fired back a response to Taylor's song in 2013.

He released a song called Paper Doll with the lyrics "Here’s a dress of gold and blue / Sure was fun being good to you / You’re like twenty-two girls in one / And none of them know what they’re running from" Direct references to her song Dear John.

The 50 Shades of Grey director and Avengers actor first met while working on the film Nowhere Boy in 2009. They were engaged a few months later and got married in 2012.

Sam is old enough to be Aaron's mother

The two have a 24 year age gap, and despite only meeting, after Aaron turned 18, we still find this marriage... dubious. They have two daughters, one born in 2010 and another born in 2012.

Okay, so they're not actually dating, but rumors started to fly a few weeks ago when the Stranger Things star revealed on the Emmy's red carpet that the two text constantly.

She also said that Drake gives her "advice about boys."

$21.53 $17.22
Buy Now
See More Deals
We hope you find these deals as awesome as we do! Just an FYI: we may receive a share of sales from links on this page