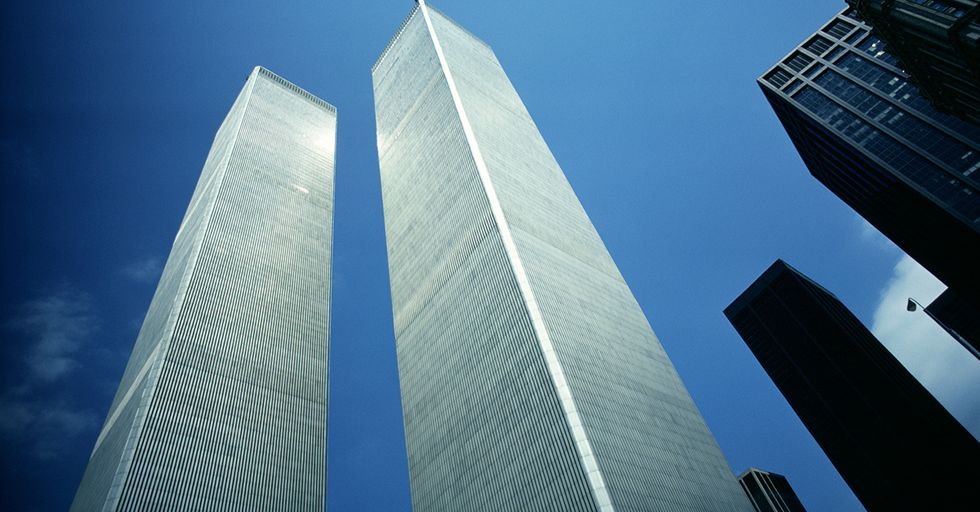 September 11, 2001 was a day that many of us can never forget. If you're old enough to remember, you can most likely name the exact moment when you heard that a plane flew into the World Trade Center. It felt like a horrible dream, a nightmare that simply couldn't be true. Nearly 3,000 people lost their lives that day and more than 6,000 people were injured.

It was an unimaginable attack, and yet on that day, many people were heroes. In times of immense despair, it's important to focus on those who gave their lives to help others and those who put others first. It reminds us of our humanity and the good in the world, even in the midst of something as horrible as 9/11.

Here are incredible true stories of heroism that happened on 9/11.

The Man in the Red Bandana.

Welles Crowther, known only to the people he helped as "the man in the red bandana," was an equities trader at Sandler O'Neil and Partners on the 104th floor of the South Tower. When United Airlines Flight 175 struck the tower, Crowther phoned his mother to let her know he was okay.

But after making that phone call, Crowther went to the 78th-floor sky lobby.

The young man helped injured workers make their way down the stairs to safety. It was hard for anyone to see through the smoke and debris, but they noticed a red bandana wrapped around Crowther's face to shield his lungs from the smoke.

Crowther instructed survivors and led them to the stairway.

He also carried an injured woman on his back. "I see this incredible hero, running back and forth and saving the day...People can live 100 years and not have the compassion, the wherewithal to do what he did."

He was a miracle.

Crowther saved a dozen people that day and died when the tower collapsed. He was a hero in every sense of the word.

His legacy lives on.

"He's definitely my guardian angel — no ifs, ands or buts — because without him, we would be sitting there, waiting until the building came down," Ling Young, a survivor, told CNN. He will be remembered forever.

The brave passengers of United Flight 93.

At 9:28 am on September 11, United Flight 93 was hijacked by four al-Qaeda terrorists. The hijackers stormed into the cockpit approximately 46 minutes after take-off from New Jersey, heading to San Francisco.

The passengers of United 93 began to find out what was going on.

After learning that two planes had crashed into the World Trade Center, they were realizing what the real plan of the terrorists was. One man on board, Tom Burnett, spoke to his wife, Deena on the phone. She told him that another plane had hit the Pentagon. Tom decided something had to be done and he needed to put a plan together.

Other passengers on the flight were simultaneously learning the details of what was happening.

The passengers decided to fight back. Led by the four-man group of Mark Bingham, Jeremy Glick, Todd Beamer, and Burnett, they rushed the cockpit.

"From 9.57, the cockpit recorder picks up the sounds of fighting in an aircraft losing control at 30,000 feet - the crash of trolleys, dishes being hurled and smashed," The Guardian wrote. "The terrorists scream at each other to hold the door against what is obviously a siege from the cabin. A passenger cries: 'Let's get them!' and there is more screaming, then an apparent breach. 'Give it to me!' shouts a passenger, apparently about to seize the controls."

The plane is believed to have been headed for The White House or the Capitol Building.

But because of the bravery of the passengers to fight back, the plane crashed into an empty Shanksville, Pennsylvania field. The passengers who tried to overtake the hijackers will forever be remembered as heroes.

American Airlines Flight 11 was hijacked by five al-Qaeda terrorists just fifteen minutes after take-off from Boston. The flight was headed to Los Angeles, but the hijackers changed the flight plan to New York City.

It was reported that several passengers and flight attendants were stabbed, and the al-Qaeda leader was at the helm of the plane.

That's when flight attendants Betty Ong and Amy Sweeney stepped in. They both used the crew telephones to call their control and calmly explain the situation.

Despite the horrifying circumstances, Betty Ong kept her cool while on the phone.

Ong explained what was unfolding on the plane, providing information to her colleague.

Sweeney did the same thing. "This is Amy Sweeney," she said. "I'm on Flight 11 -- this plane has been hijacked." The call was disconnected and she phoned back: "Listen to me, and listen to me very carefully."

The call was then taken over by someone Amy knew.

"Amy, this is Michael Woodward." Woodward was friends with Sweeney and was an American Airlines flight service manager. "Michael, this plane has been hijacked," Sweeney said. She was incredibly calm and gave him the seats of the three hijackers as well as their descriptions. Because of both Ong and Sweeney's clear thinking, they were able to get vital information American Airlines control.

Former U.S. Marines put their uniforms back on and search for survivors.

When 27-year-old Jason Thomas heard what had happened at the World Trade Center, he decided to change into his Marine Corps uniform that he had in his car. At the time, he was dropping his daughter off in Long Island.

"Someone needed help. It didn't matter who," Thomas explained to AP. "I didn't even have a plan. But I have all this training as a Marine, and all I could think was, 'My city is in need.'"

While this was going on, a man in Connecticut named Dave Karnes was watching the attack on the news.

The former Marine told his boss he might not be back for awhile got a haircut, then changed into his Marine uniform and sped toward the city.

Both Marines found each other at the collapsed towers.

The pair began yelling out over the rubble for anyone that might be alive. "United States Marines! If you can hear us, yell or tap!"

The two men thought they heard someone shout back.

It was two New York Port Authority police officers stuck in the rubble. They were alive but terribly injured. It took rescue workers several hours to save them and neither Karnes nor Thomas left before they were rescued. Both Thomas and Karnes returned to the site after that first day to continue and help. They both showed incredible bravery and selflessness.

Rescorla earned the Silver Star and other awards from his time serving in Vietnam. He was known for singing to his soldiers to keep them calm, and on September 11 he would do the same. Rescorla was the head of corporate security for Morgan Stanley in the South Tower.

When Flight 11 hit the tower next to where Rescorla was working, he was ordered to keep his employees at their desk.

He didn't listen. "I said, 'Piss off, you son of a bitch,'" the New Yorker reported he said to Daniel Hill, in a phone call that morning. "Everything above where that plane hit is going to collapse, and it's going to take the whole building with it. I'm getting my people the f**k out of here."

He issued the order to evacuate.

Because of his concerns with the World Trade Center's security, he had made his employees practice emergency drills for years. Because of Rescorla, just 16 minutes after the first plane hit the tower, more than 2,700 employees and visitors were out of the building by the time the second plane hit.

Rescorla sang during the evacuation to keep everyone calm.

As they marched down the stairs toward safety, he sang "God Bless America" and "Men of Harlech." According to The New Yorker, Rescorla called his wife during the evacuation and told her to stop crying.

"Stop crying," he said to her. "I have to get these people out safely. If something should happen to me, I want you to know I've never been happier. You made my life."

Rescorla was last seen on the 10th floor.

His body was never found, but he was responsible for saving thousands. He was a remarkable man.

After the planes hit the World Trade Center, two D.C. Air National Guard pilots tried to quickly intercept United Flight 93. They were unarmed. According to NBC News: "In the days before Sept. 11, there were no armed aircraft standing guard in Washington, D.C., ready to scramble at the first sign of trouble. And with a Boeing 757 aircraft speeding in the direction of Washington, D.C., Penney and her commanding officer, Col. Marc Sasseville, couldn't wait the dozens of minutes it was going to take to properly arm their respective jets."

They were ready to sacrifice their lives.

"We had to protect the airspace any way we could," Maj. Heather Penney told The Washington Post back in 2011. "We wouldn't be shooting it down. We'd be ramming the aircraft. I would essentially be a kamikaze pilot."

But the passengers of United 93 fought back and the interception became unnecessary.

The two pilots, though unarmed, were ready to do everything they could to prevent another plane crashing into a building.

A tour guide at the Pentagon.

When the Pentagon was hit by American Airlines Flight 77, Army Spc. Beau Doboszenski was working as a tour guide. After a Navy captain inquired if anyone had medical training, Doboszenski sprung into action. He was a former firefighter and had been trained as an EMT.

He ran into the building, past barricades and police.

Doboszenski gave first aid to victims and afterward, was part of a team that went back in to look for any survivors despite the building still being in flames. "When people started streaming out of the building and screaming, he sprinted toward the crash site," former Vice President Biden said on the 10th anniversary. "For hours, he altered between treating his co-workers and dashing into the inferno with a team of six men." A true hero, like all the others.