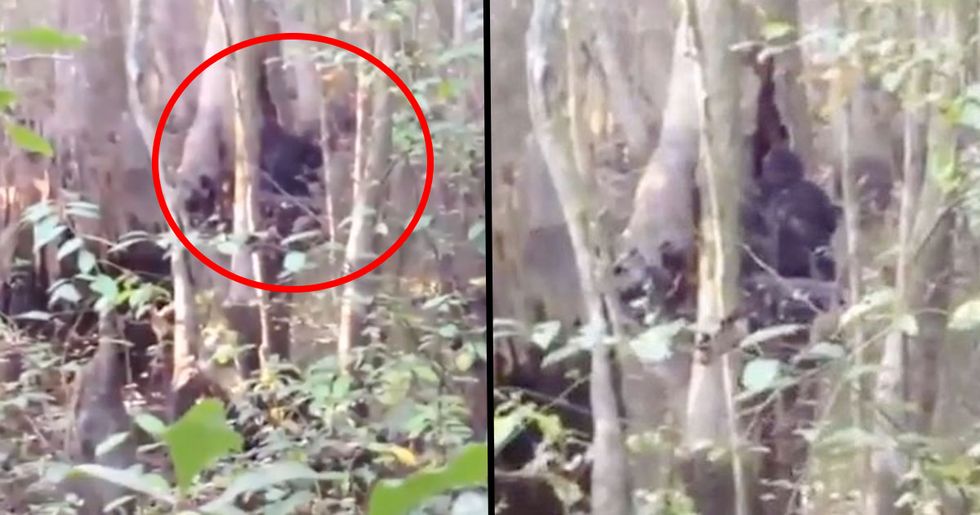 For as long as we can remember, the mystery of Bigfoot has plagued the internet. Does this gigantic, ape-like creature exist - or is it all part of an elaborate rouse? Believers have long had to rely on shaky, pixellated, and often fake-looking, footage in order to prove their claims. That is - until now.

Some of the latest Bigfoot footage that has emerged online is really blowing the internet away. It's unlike any Bigfoot sighting recorded before, in both its clarity and its veracity. Are you convinced? Judge for yourself.

There's nothing that the internet loves more than a mystery.

In a way, the sheer amount of information that we have access to today has made the world seem a little too "figured out." Unexplained phenomena make the world seem magical again.

Which isn't to say that we want these things to stay unexplained...

In fact, many on the internet will dedicate whole portions of their lives to convincing others that their belief system is the "correct" one.

And many go one step further.

Some believe that the reason that certain things remain unsolved is because someone doesn't want us to figure them out.

And one of the biggest unsolved mysteries out there?

Bigfoot. In folklore, Bigfoot is a tall, upright walking, ape-like creature that represents the missing link between humans and primates.

It's so named because of its imposing size.

They're particularly associated with the Pacific Northwestern region of the USA - although similar types of creature exist in mythologies around the globe.

Most scientists discount the phenomena as folklore.

Although there are some anthropologists who do believe. "Evidence" of Bigfoot includes oddly enormous excrement piles, those frighteningly oversized footprints, and, of course, claimed sightings of the creature.

This tends to come in the form of word-of-mouth.

Although, from time to time, we do see some (usually pretty low quality) footage of Bigfoot - or, at least, of some sort of giant ape (or man in an ape costume).

Occasionally, footage of a Bigfoot sighting will go viral.

This 2007 photo was put forward by the Bigfoot Field Research Organization (yes, really) as evidence of the creature's existence - though many claimed that they believed it to be a bear with mange.

Those who wish to stay unconvinced remain skeptical.

In fact, many Bigfoot skeptics claim that the footage and photographs of different sightings are actually deliberate hoaxes by people just wanting some online attention.

Many believe that the Bigfoot bones found by investigators actually belong to an ancient (and now extinct) primate called the Gigantopithecus.

Nonetheless, Bigfoot has become something of a cultural touchstone.

Because it seems like it'll be impossible to ever fully disprove, the myth of Bigfoot will likely be with us forever. Or, at least, until the internet ends.

But this week, some old footage resurfaced.

And this new video has got the internet talking, once more, about what exactly is lurking in our forests.

The footage comes from Mississippi.

The town of Tunica, in the northern part of the state, has some truly beautiful forests - and it was in these forests that our mystery creature was sighted.

The poster, known only as Josh Highcliff, published the vid back in 2003 - and it's the only one that the channel has ever posted.

He's been interviewed about the mindblowing clip.

"It looked like it was digging out the stump. When it stood up, I could not control myself and ran. That stump was huge and I'd guess the sucker was 7 feet tall," he claimed.

The comments on the vid speak for themselves.

Many have claimed to be totally convinced by this footage - which looks far less faked than what's come before.

It's not just believers who are buying in.

Even skeptics who have stumbled upon the video are saying that this may be the tipping point that changes their minds.

Many have noticed one thing in particular.

The creature captured on film appears to tear chunks off a tree with its bare hands - which seems like something that would be difficult to fake for a simple hoax vid.

The way that the creature takes the tree apart seems to suggest that there's more going on in its head than in a "regular" animal's. It looks almost as if it's thinking.

Do you think that it's camera trickery - or something more world-changing? Into mysterious footage of unexplained phenomena? We've got a treat for you of the alien kind - so keep reading.