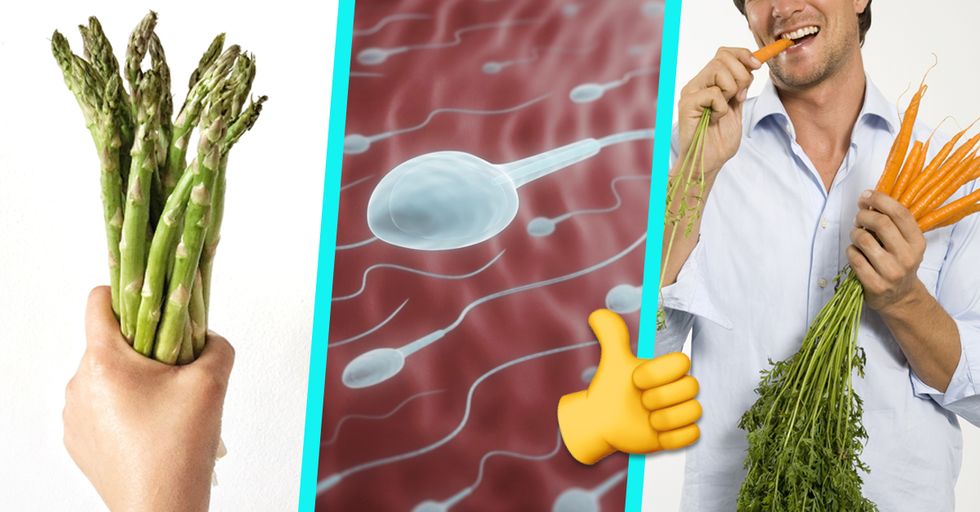 You are what you eat. It's a phrase that's drilled into our minds constantly. Turns out, there's a lot of truth to it. Food has all kinds of side effects, some of them good, some of them bad, and some of them just plain weird.

Here are 30 of the weirdest ones.

Have you ever had asparagus for dinner and then woke up the next day to really funky-smelling pee? Turns out you're not imagining it – asparagus really does make your pee smell funny.
This is because asparagus contains asparagusic acid, which the body converts into sulfur-based chemicals. Thankfully, not all people suffer from this unfortunate side effect.

Sugar-free – what's not love? You can have your gum and eat it too. Right?
Wrong, because as it turns out, sorbitol, the sweetener in sugar-free gum, is a laxative. Our bodies can't digest it very well, so it literally rushes out of you.

3. Beets actually up your endurance

Wanna be a greater athlete? Drink beet juice. No, seriously, the nitrates in beets widen your blood vessels, lessening the amount of oxygen you need for your muscles to work.
That's not the only benefit of beets, however, they also lower your blood pressure – probably for this very same reason. Beets – who knew.

4. Carrots can make you a literal carrot-top

Everyone always tells you to eat your vegetables and to focus on the colorful ones like carrots. But did you know carrots can actually make you colorful?
Carrots contain carotene, the pigment that gives them their signature orange color. Carotene can also change your skin color to orange if you eat massive amounts of carrots. The key phrase here is "massive amounts."

5. Carrots can make your swimmers healthier

Ah, carrots, is there anything they can't do? Not only can they change your color, they also have a very particular effect on men. They can make your sperm stronger swimmers.
The mechanism here is carotenoids, pigments the body converts into Vitamin A and other antioxidants. You want to win the Olympics of fertility? Eat your carrots.

6. Soy is really not advisable for men

Not every vegetable is great for your swimmers. Too much soy can actually adversely affect your sperm. It can literally kill them.
In this case, the mechanism is isoflavones, estrogen-like plant compounds that can even give you man boobs. Maybe lay off that soy if you're a dude? Just sayin'.

7. Coffee can send you on a weird trip

8. Pomegranate can give you better woodies

Ah, the exotic pomegranate. It's gotten a lot of bad rap over the years, ever since the Greek goddess of spring, Persephone, ate it and got stuck in the underworld half the year. True story.
Turns out pomegranates do have one great side effect. They can give you really good wood. And by wood, we mean erections. Pomegranate juice has tons of antioxidants which help blood flow, and that's great for erectile dysfunction. So go out and buy that POM Wonderful. It's good for you.

9. Alcohol boosts your memory – no, really

Alcohol releases dopamine, which helps your brain make new memories at the subconscious level. While this is great...
You know how else you can release dopamine? By going on a walk or talking to a friend, or having sex. You know – healthy activities.

10. Hot sauce messes with your sleep

Don't keep that hot sauce in your bag just yet – your favorite Tobasco may be messing up your sleep schedule. Why, you ask?
Well, hot sauce contains capsaicin, which is the active ingredient in chili peppers. Capsaicin raises your body temperature, which can mess up your sleep, so maybe save the hot sauce for lunchtime...

11. Eating mulberries can send you on a trip

People rarely think about mulberries. They aren't sold in supermarkets because they're too delicate to transport, and you won't see them in your local city because they produce too much pollen. But did you know they can make you hallucinate?
Unripe mulberries contain hallucinogens, and eating too many can send you on a very unpleasant trip. Oh, and as if that wasn't bad enough, unripe mulberries are also a natural laxative...

Men and meat go together like peanut butter and jelly. At least, that's what the beef industry wants you to believe. As it turns out, however, there is a teeny sliver of truth to this myth.
Researchers found that men who saw meat and foods containing it were calmest when they were subjected to stressful situations. The more you know, eh.

13. Grapefruit can increase your melanoma risk

Hey you, the red-head sitting alone at the bar. You already know to watch out for those evilly sunny beaches, and to always slather yourself with SPF, but did you know you had to watch out for grapefruit too?
Turns out there are certain photoactive chemicals in citrus skins that make human skin sensitive to the sun. That's why you can literally get get a rash from making margaritas in the sun. It's called phytophotodermatitis, also known as bartender dermatitis. It's a thing.

14. Rhubarbs can turn your pee pink

Ah rhubarbs. If we're being honest, we can't actually remember ever eating a rhubarb. Lots of people have, apparently, and this has led to a very strange phenomenon – it makes your pee pink.
Rhubarbs contain a pigment called anthrocyanin which builds up in your body. Your body releases it through pee. Pink pee.

15. Shiitake mushrooms can make you break out

Even though shiitake mushrooms have a gleefully filthy-sounding name, they're pretty much harmless – for most people, that is.
For some people, however, shiitake mushrooms can cause a severe red rash that mimics poison oak. This phenomenon is called shiitake dermatitis and is caused when a compound in the mushroom called lentinan breaks down because of heat.

It's called popcorn lung, and it's a very severe illness that's caused by the chemical that gives microwave popcorn its buttery smell – diacetyl.
Popcorn lung typically affects factory workers and people who have close, prolonged contact with diacetyl over long periods of time. It causes difficulty exhaling, and can be fatal. Long story short – enjoy popcorn, but not too much.

17. You can get high on nutmeg

Yes, nutmeg, that innocuous looking spice all the way in the back of your spice rack that only comes out during the holidays.
Eating too much nutmeg can can cause a high similar to marijuana – BUT – it also comes with a wicked headache and nausea, which is why it's never become a popular drug.

18. Margarine can make you pissy

What's the difference between butter and margarine? For one, margarine is a cheap alternative that supposedly has less fat than butter. For two, it can make you super grouchy.
Why? Because of all those trans fatty acids, which make you mad. Long story short – just stick with real butter. You'll literally be happier for it.

19. Miracle Fruit can literally change your sense of taste

Have you ever heard of miracle fruit? The very complicatedly-named Synsepalum dulcificum is a berry from Africa with a unique gift - it can make sour things taste sweet.
This is because miracle fruit's pulp is filled with a protein called miraculum which temporarily tricks the sweet receptors in your taste buds to read acidic flavors as sweet. Neat.

This is a public service announcement for anyone who's knee-deep in the latest high-protein diet – lay off the meat because it makes you smell bad!
Meat is harder to digest, so it leaves residue inside your stomach that is released via your sweat. When this mixes with the bacteria in you body, you get serious B.O. No wonder women like the smell of vegetarians more.

If you can eat pine nuts and be fine, be thankful. For a small amount of people, pine nuts can literally make your mouth taste like soap.
Even worse, the symptoms don't fade quickly. It can last from 48 hours to three weeks. When in doubt, just stay away from raw pine nuts.

22. Broccoli can cause hypothyroidism

Hypothyroidism is a disorder caused by an underachieve thyroid gland and can cause cold sensitivity, weight gain, constipation, exhaustion and depression.
Even worse, you can eat yourself into it by eating too much broccoli and other cruciferous vegetables, which contain chemicals called goitrogens that mess with your thyroid.

23. Oysters can boost your libido

And so can strawberries, for that matter. The key here is zinc, which boosts testosterone production.
Wanna see your sex drive roar? Just eat a few oysters, and maybe a strawberry or two, and you're already halfway there...

24. Beets can turn your pee and poop red

Don't worry, that red that you see in the toilet bowl is definitely not blood (unless, of course, it is). In any event, this condition, called beeturia, is hereditary for 14% of the population, and happens every time they eat beets.
For the rest of us, though, red pee and poop after eating beets is a sign of iron deficiency. Pretty cool, eh?

Anyone who's ever chopped onions knows that it has an unfortunate effect on our tear ducts. Onions contain an acidic chemical called syn-propanethial-S-oxide, which irritates our eyes.
However, scientists have developed a new onion that's tearless. It's called the sunion, and it was developed after 30 years of cross-breeding. We honestly can't wait to try it.

26. Figs can cause light sensitivity

And so can celery and carrots... when they're applied to the skin. Turns out, all of these fruits and veggies contain chemicals that make the skin more sensitive to the sun.
You can get anything from discoloration to blisters, which, as you can imagine, is seriously uncomfortable...

27. Nuts and seeds can give you headaches

Hey you – yes, you – the one who's popping almonds like there's no tomorrow. Maybe take a break there, buddy.
Nuts and seeds contain a compound called tyramine which has a very odd effect. It increases blood flow to the brain, which causes headaches...

28. Avocados can make you drowsy

Is there anything the avocado can't do?! The miracle fruit of the aughts, the avocado can be paired with toast, made into guacamole, and now, it can be considered a legit sleep aid.
Basically, avocados are high in carbohydrates and low in protein, which allows the brain to secrete even more melatonin and serotonin – the hormones that regulate sleep. So ignore the haters and spread those avocados on as much toast as you want!

29. Tomatoes can give you heartburn

We all love a good tomato. It's one of natures most versatile fruits (and yes, it is a fruit, not a vegetable). But did you know it can give you heartburn?
Tomatoes are highly acidic, which means they can bring on heartburn in people who are already susceptible to it.

30. Oranges can make you pee a lot

We all love oranges. They're high in vitamin C and great for getting over a cold. They're basically the most basic fruit you can eat – other than the banana. But did you know they can turn you into a peeing wreck?
Vitamin C is a diuretic. Eat enough of it, and you'll find yourself rushing to the bathroom again and again. Word to the wise, lay off that orange juice.