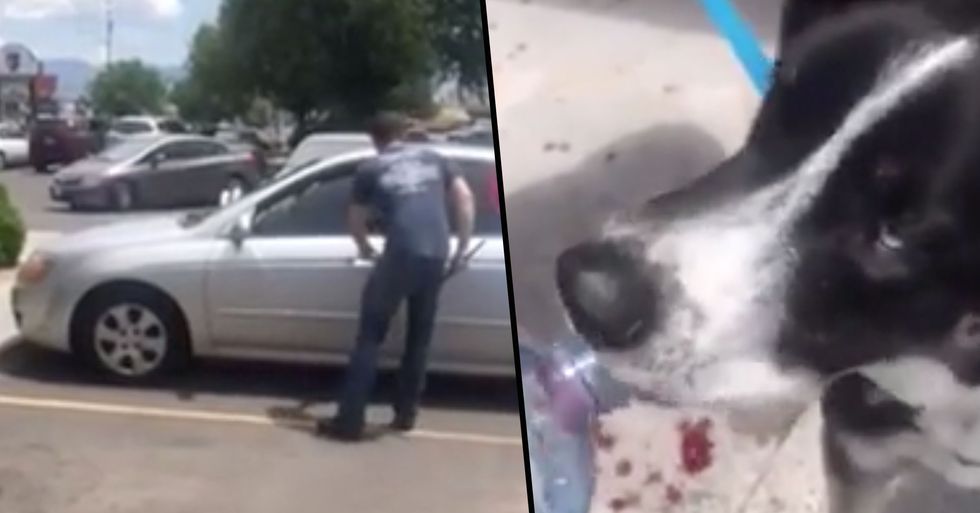 A heroic stranger took matters into his own hands recently by smashing the window of a sweltering car to free a frantic dog... and he waited to confront the irresponsible owner.

So just imagine how a dog would feel being trapped inside one for a prolonged period of time. It's completely unthinkable.

Owners continue to leave their pets in unbearably hot conditions for the sake of their own conveniences... and one man recently decided to take matters into his own hands.

Gerasimos Klonis and his girlfriend were out having lunch at a restaurant in Albuquerque...

And when they left the restaurant, they could hear a dog crying.

They quickly realized those cries were coming from inside a parked car...

Meaning that the dog was trapped inside its owner’s car on the brutally hot day and was certainly feeling the effects of the climbing temperatures. Did you know a car can reach temperatures twice as high as the ones outdoors?

Since there was no sign of the dog’s owner, a few minutes passed by before Gerasimos called 911.

But during this critical time, the dog was struggling to breathe, and it began sticking its snout out the tiny window crack and pawing at the window in the effort to "dig" its way out.

Gerasimos and his girlfriend continued to wait, but as the minutes ticked by, they decided that enough was enough.

Gerasimos is a huge animal lover and even though he didn't want to damage someone else's car, he made the decision to pick up a nearby crowbar and smash open the window to release the poor dog.

The dog seemed relieved to be out of the unbearable heat...

And the heroic couple quickly gave the dog a bottle of water, which he lapped up in minutes.

Just before the clip cuts off...

Gerasimos is heard confronting the owner who finally returns, saying, "Is this your dog??".

He spoke of how he was "extremely hesitant" to break the car window but after calling 911 twice, he just knew what he had to do to save this dog's life.

Even though smashing the window resulted in the heroic man receiving stitches and a tetanus jab...

He doesn't at all regret his actions.

Gerasimos revealed that minutes after the owner eventually turned up, animal welfare and the police arrived on the scene.

A spokesperson for animal welfare told KOB 4 that "they didn't take the dog because the harness the dog was wearing stated that it was a service animal" - but the owner defended himself by saying he didn't know if he could bring the dog into the restaurant. An appalling excuse.

It is unknown as to whether the owner was charged or not...

But Gerasimos hopes that the video is a reminder to dog owners to never leave their dogs in a car on a hot day.

And keep scrolling to read about the unbelievable man who put his dog on the roof of his car because "there wasn't any room inside"...