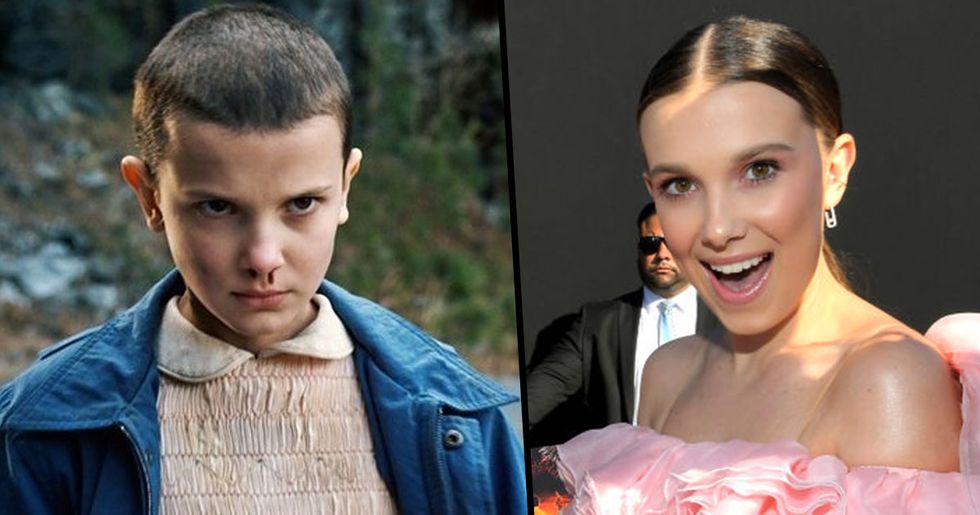 With Stranger Things season 3 set to air this week, it seems that the hit sci-fi series is all that's on the internet's mind - with fans waiting in anticipation for when they finally get to see Eleven, Mike, and the gang on their screens, battling baddies once again.

Well, the third season had its red-carpet premiere event in Santa Monica over the weekend and we couldn't help but notice how much the cast has changed over the 3 years since the show first aired. And with a large chunk of the cast being teenagers now, it's inevitable that we'll have seen quite the transformation since season 1.

So, take a look at the Stranger Things cast then vs now - you won't believe how much they've changed.

Back in 2016, Ryder made her debut as Joyce, a mother whose son mysteriously goes missing, when the first season of stranger things aired.

Pictured at the season 3 premiere, Winona doesn't appear to have aged a day.

We are first introduced to Modine as the shady antagonist, Dr. Martin Brenner, senior research scientist and the director of Hawkins National Laboratory, who raised one of the internet's favorite characters, Eleven.

3 seasons on, and Modine looks unrecognizable with a beard and grown-out hair.

Buono plays Karen Wheeler, the mother of Nancy, Mike (just wait until you see his transformation), and Holly and wife to Ted Wheeler in the hit show.

Buono has certainly changed up her look since the first season, opting for blonde locks and bangs.

Off-screen, Montgomery looks unrecognizable from his character, Billy Hargrove, as it is. Billy looks rugged with longer hair and a violent and unpredictable temperament, whereas Montgomery is often seen sporting a much cleaner look.

Montgomery was seen bearing even less resemblance to his on-screen persona at the Stranger Things season 3 premiere.

Hopper is a pretty important character in the series. In the first, we see him helping his old friend, Joyce, find her son, and in the second he takes in Eleven - living with her for almost a year, resulting in a father-daughter-like bond between the pair.

Well, what can we say? It seems like growing out your beard really can change your face.

Heaton, who's dating fellow cast member, Natalia Dyer, plays the older brother of Will Byers, who desperately tries to help his mother, Joyce, to find his younger sibling. So, what does he look like now?

It seems that not too much has changed, apart from a slight haircut maybe?

Dyer burst onto screens as Nancy, a teenage high school student living a seemingly carefree life. However, when her best friend, Barb, goes missing, she becomes wrapped up in exposing Hawkins' lab, helping Johnathon and his mother in their pursuit to find Will along the way. Off-screen, however, speculation and, well, concerns began swirling around the internet surrounding Dyer's seemingly low weight.

Keery portrays Nancy's boyfriend, Steve Harrington, in the sci-fi series. Although he appears to be a minor character at the start, Steve forms an unlikely friendship with the main gang, evolving into an authority figure for the kids. He eventually goes on to become a key player in the battle against the Mind Flayer.

Now, we don't know whether this is lighting or not, bit it definitely looks like he's stopped using self-tanner.

Despite being a recurring character in the first season, Purser, who plays Barb, a character that goes missing in the show (although it eventually comes out that she was killed by the Demogorgon), has gone on to branch out into other Netflix projects such as Sierra Burgess Is a Loser and Riverdale. Sadly, we're not set to see much, if any, of Barb in the new Stranger Things season.

Although we'll be sad to see Barb go, Purser seems to have stuck to her style, donning her trademark short hair - rocking a subtle wave vibe as she attended the premiere of A24's Midsommar last week.

Despite not being an original cast member, Sadie Sink quickly won our hearts - making her Stranger Things debut as tomboy, Max, who ends up becoming the sixth member of the main gang, much to Mike and Eleven's dismay (at first, that is).

Despite only first being cast in the show from season 2, Sadie has undergone a huge transformation in just two short years. She's even made her catwalk debut, too!

Noah Schnapp (Will) - Then.

Now, this is where the real transformations start to happen... When Noah Schnapp first graced our screens as Will Byers in the show, he wasn't even a teenager yet. At the time, we didn't see an awful lot of him on our screens because, well, the whole plot centered around the fact that his character was missing. But in season 2, we saw much more of the young actor, and we're set to see even more in the third installment. Now, we're sure you're dying to know, what does he look like 3 years on?

Well, he's all grown up, to put it simply. The now fourteen-year-old walked the red carpet this weekend and we can't believe how much he's changed.

Matarazzo, who was one of the first actors to be cast in the series, was just twelve when he hit our screens as the loveable Dustin Henderson, who we see join forces with the rest of the gang to save Will.

Once again, he looks so different. It seems like he's ditched the gelled, curly hair for a slicker look and is sporting braces, too.

Stranger Things season 1 opens with us getting to see Will's disappearance through the eyes of his best friend, Mike, played by Finn Wolfhard. Mike is a pretty important character in the series, after all, he's the one who first discovers Eleven after she escapes the lab and manages to hide her in his family home. At just thirtten when we first saw him in the series, as you can imagine, he looks completely different now...

Now, this is perhaps one of the biggest transformations out of the whole cast. For one, look at how tall he got, and two, look at that big, curly hairstyle he's got going on! Wolfhard has a lot of side hustles, too. Not only is he a model (he was made the face of Saint Laurent in March), but he is the lead vocalist and guitarist for the rock band, Calpurni. Is there anything that he can't do?

Caleb plays Lucas Sinclair, who we see is initially apprehensive about befriending Eleven when Mike first introduces her to the gang. Caleb is arguably also the most experienced actor from the teenage cast, having previously starred on Broadway in Disney's The Lion King, taking on the role of Simba. He had also appeared opposite Jennifer Lopez in US crime show, Shades of Blue.

Caleb is the oldest cast member out of the kid clan, so we're sure that you aren't too surprised that the now seventeen-year-old looks totally different from the way that he did when we first saw him on our screens. Also, is that facial hair we see? He's grown up so fast.

We suppose this is the one you've all been waiting for... British actress, Millie Bobby Brown, portrays Eleven, a telekinetic prisoner who becomes obsessed with a snack called Eggo. Arguably, the teen is the one cast member who seems to have found the most global success from the show.

Well, we're certainly going out on a bang, because the teen hasn't just grown up, but she's undergone a complete 360 life transformation. Not only has Millie grown up immensely, she's also become a bit of a red-carpet native and a fashion icon, despite only being fourteen. She has been spotted at several high fashion shows and her street style has caught the eye of pretty much every tabloid. She's even been the face of a Calvin Klein campaign last year and is estimated to now be worth around $3 million. Wow. In other news, Netflix released some seriously cool posters for the show that are all inspired by classic images from some of the most iconic '80s horror movies. Can you spot the lookalikes?