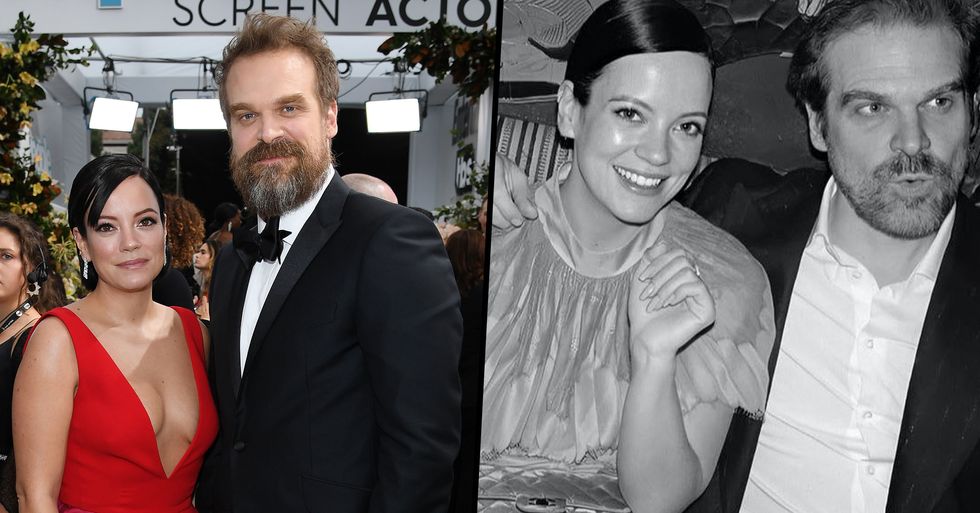 When it comes to celebrity couples, in our eyes, the odder the better. When two worlds collide and give us a brand new romance, it's truly a fantastic feeling. But the latest offbeat couple who have gone official might be the cutest yet.

Ever since Stranger Things 3 finished, the world has developed an unlikely crush on Chief Hopper - played by actor David Harbour. And another person who can't resist his charms? Strangely enough, it's British pop star Lily Allen.

And now the two have tied the knot!

As The Sun has confirmed Lily Allen and David Harbour have got hitched.

Born in 1985, her dad is a famous British actor, Keith Allen. She left school at fifteen with one dream in mind - to make music.

She first rose to fame on social media platform MySpace.

Allen hosted her own music gaining a huge online following. This led to a record deal, and eventual fame.

She's known for something else, too.

Allen has a very outspoken online presence and is not afraid to share a controversial opinion online.

Allen has had a few fairly public relationships.

In 2011, she married long-term partner Sam Cooper in Gloucestershire, England. She even changed her name! The pair didn't last, though, and announced their divorce in 2018.

Ethel Mary was born in 2011, and Marnie Rose in 2013. The two now happily co-parent their daughters.

Born in 1975, David Harbour is an American actor.

He's been working in the biz since 1999, but gained recognition for one role in particular.

And although Hopper's current fate is up in the air, he'll always be known for this role.

Until recently, Harbour was taken.

Since January of 2018, he'd been dating singer-songwriter Alison Sudol.

But things didn't last here, either.

The pair reportedly split during the summer of 2019, with their last public appearance being at the Hellboy premiere in April.

But it seems new love was on the horizon.

Because in August of 2019, Harbour was spotted out and about with another famous face - Lily Allen. The two attended a performance in London's West End, ate dinner, and reportedly went home in the same taxi.

That same month, the pair attended a boxing match together.

They were spotted in the crowd by an eagle-eyed fan - who expressed surprise at the unlikely coupling.

Then things got even more intimate.

Then a PDA was captured.

In October, the new pair strolled through New York City and ate brunch, all while looking very cuddly.

Things seemed to be heating up.

Earlier this month, the pair were spotted canoodling at the New York Knicks vs. New Orleans Pelicans game. They were being very affectionate and uber cute.

The pair then took things to the next level.

Becoming Instagram official! Harbour posted this cute pic of the pair, confirming their relationship once and for all.

And now the pair have taken things a step further.

And now it's been confirmed to be real!

The two wed at an Elvis-themed chapel in Vegas.

Congratulations to the cute pair!

Want more celebrity couples? Scroll on for some you've definitely forgotten about.