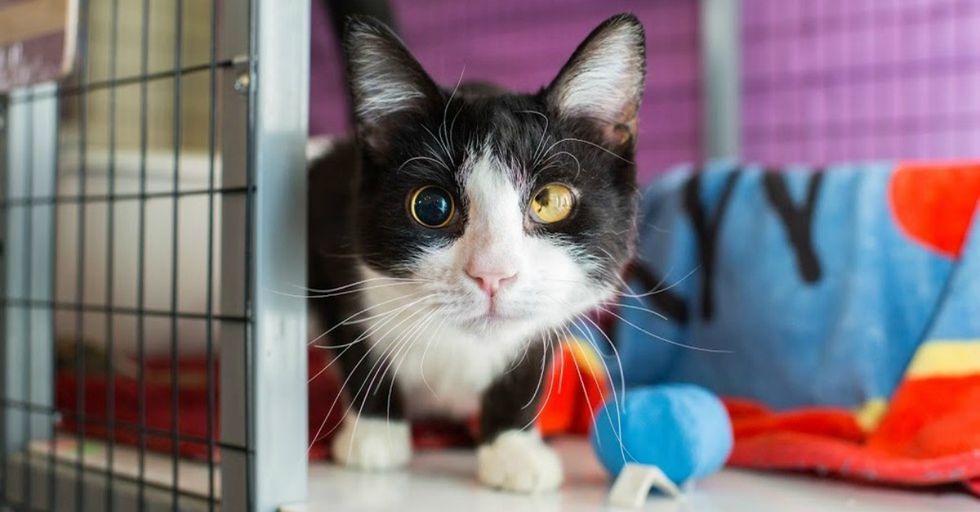 Strangers Finds a Stray Kitten and Notice Something Very Special About Him...

If you're looking for a feel-good story today, this is for you!

He looks pretty comfortable now, but he had a pretty rough go in the beginning. According to Love Meow, he was found by a tire shop crew, and they noticed that this cat wasn’t just a regular street kitten, but that he had something very unique going on in his eye.

They eventually realized that he was most likely blind.

He had a very difficult time living among other feral cats that often prevented him from eating and even attacked him. The tire shop owner knew that had to do something to help him, so they took him in.

The tire shop knew they couldn’t take care of Dudley forever, so they reached out to Julie Parlett from the Southern Countries Rescue.

She contacted a rescue group in Burbank, California that specializes in the aid of blind cats: Milo’s Sanctuary & Special Needs Cat Rescue.

The owner of the tire store managed to trap Dudley into a pet carrier, and his life was changed forever.

"Thanks to the tire store owner and Julie they got him into a carrier," said Michelle of Milo's Sanctuary. "After assuring the tire shop owner that he was going to be safe and taken care of, Dudley was driven to the Milo's Sanctuary vets where he celebrated a New Life and a New Year."

It was determined that he was born blind; having one retina detached and the other pupil that didn’t form correctly.

The sweet kitty was also given a full check up, neutered, and microchipped.

As soon as he was placed in his Lifetime Care Foster home, he came out of his shell and started to play with toys.

Because of Dudley’s blindness, the care program ensures that Dudley will have everything he needs, for life.

"He really loves his food, treats, and his soft heated bed," Michelle said.

Dudley now spends his days snuggling around and playing around in the house, all thanks to some people with a big heart that helped him along. If you would like to sponsor Dudley and other resident cats at Milo's Sanctuary, click here for more info.