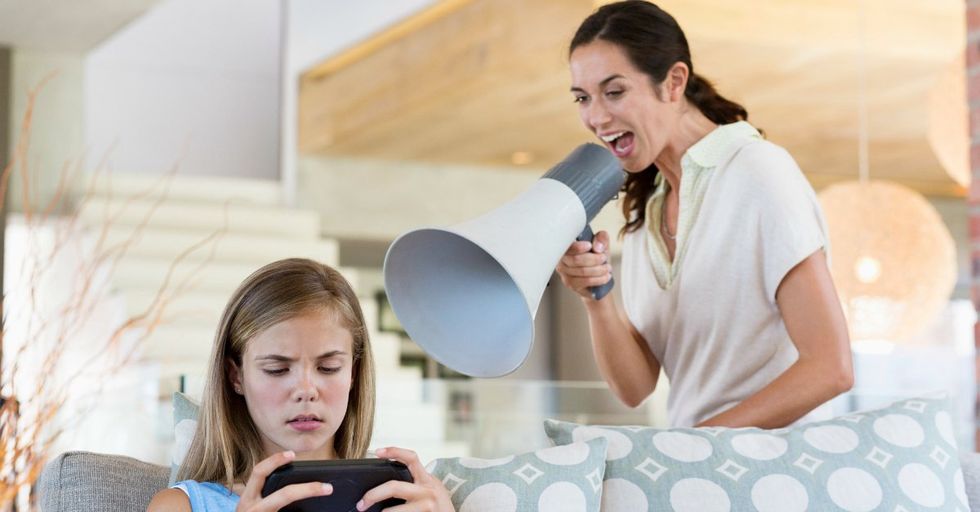 It's always lovely when you're invited to someone's home, especially if that means you don't have to do the hosting. But occasionally, you can find yourself in the home of either someone you know very well or don't know well at all, and you're forced to come face-to-face with some...rather peculiar house rules.

Which is fine. It's not your house. You don't get to make the rules.

I'll never forget the time I got in huge trouble at a friend's house for brushing my hair in the kitchen because it was "unsanitary." How was I supposed to know they considered a hairbrush "unsanitary" for goodness' sake?!

But like, why are some of the rules so crazy?

Have you ever been to somebody else's home and have become completely flabbergasted by the rules they have set in place? Basic rules are fine, obviously.

You can't just walk into someone's home and kick your feet up on their kitchen table.

Everyone has rules in their home, even if they're chill rules. But some people? Some people take it to a whole other level...

Some people have rules, and if you break those rules...

Well, you're going to wish you'd just stayed home. Probably. That sounded really dark, but you know what I mean. Here are some of the strangest house rules people have encountered...

You must wear a diaper to bed.

Reddit user bostonwhaler revealed the odd rule his friend's mother used to enforce on their sleepovers: Growing up, myself (and often with other friends) would do sleepovers at a buddy's house. He was a bedwetter and wore diapers to bed, but we were cool with it... Never any teasing or anything. His mother would demand that we ALL wear diapers to bed when sleeping over, which was odd, but it made our buddy even more uncomfortable about his situation. Poor dude would apologize constantly about the fact that we had to use them too. Wow. The poor kid!

You must never come inside.

You can only use a certain bathroom.

I live with my grandmother and our house has 2 bathrooms. 1 bathroom is her bathroom exclusively and the other bathroom is everyone else's bathroom. If you use her bathroom you're shunned from seeing her or being in her home for life. My cousin and her 3 kids (her great-grandchildren) have been banned from seeing my grandmother ever again because we completely forgot to tell my cousin's ex-husband about the bathroom rule. - gothiclg That grandma is not messing around.

You can't have syrup and powdered sugar. It's one or the other.

While having breakfast at a neighbor's house, I reached for the syrup and powdered sugar on the table to cover my waffles. I pick up the syrup and she says, 'we only use one or the other at this house.' -SuspiciousMystic Uhhh....okay, why? Doesn't really make sense, but sure.

No beverages while eating.

There are certain cups for certain drinks.

My cousins always had weird ass rules about which cups were acceptable to use for which beverages at their house. I can't tell you how many times I would go to get a cup of water just to have one of them appear out of thin air beside me and scream 'THAT'S A SMOOTHIE CUP WHAT ARE YOU DOING!', or go to pour myself a cup of milk only to be berated for using a juice cup. I've brought it up to my siblings and apparently it always made them really uncomfortable too, and it's given us all some degree of anxiety about using the kitchen at other people's houses. - TheLastSpoon A cup is just a cup!

You absolutely cannot pour your own drink.

My friend’s mother absolutely refuses to let guests pour their own drinks. Not just insisting 'let me pour that for you' but will actually get mad if you do it yourself. - Mellonhead58 Maybe she's just really afraid to get poisoned.

Music is fine but it cannot have any lyrics.

My dad had a strict rule: no music with words. - laterdude At least this dad allows his children to listen to some music. No music would simply be a tragedy.

You better not have a book on you.

My cousin's house when I was a kid - there was a 'no reading during the day' rule. I was a bookish kid terrified of my mad uncle so I just went along with it. - spiderbabyinapram The no reading rule seems a bit intense.

One towel to go around!

One reddit user shared how his friend's family all shared a single towel: They all shared a towel after showering. Like one towel for everyone, for one or two days. When I visited I asked where the towels were so I could shower after the pool, they looked at me like I had two heads. Explained the towel sharing situation, because 'you’re clean when you dry off so it’s still clean!' -FurTheGigs Um...that is not sanitary.

I landed a summer babysitting job when I was 15 or 16, and got yelled at because I took Cheetos, Doritos, and Pretzels and put them all in the same bowl. They were snack sized bags, and I’d eaten the whole bowl full, but there must’ve been 'crumb evidence' for Sherlock Mom. She said 'We don’t mix our food in this house.' And then she fired me soon after because she said she wasn’t comfortable with me doing stuff like that around her kids. -SuperMommyCat How could anyone think to do such a horror as mixing snacks?!

You may never pass gas.

Once when I was 8 or 9, I went to a friend's house and we were playing board games on the floor while her parents sat on the couch nearby. As I leaned over to reach something, I farted. Nothing loud, nothing obnoxious. Well, CrazyMum is like 'What was that? Excuse me, what the absolute hell was that? Who did that? I'm sorry [my name], but we do not fart in this house.' I'm sitting there like oh haha just waiting for her to break character and laugh or something. Nope. She then just left the room and didn't come back. Friend's dad took me home later. So basically their family house rule was... just not to fart... -zenithica It's human nature!

Do not bother a man when he plays his saxophone.

Are you ready to buckle up for the next story? It's a doozy. Went to a friend's house. Well-to-do kind of family, straight-laced. The Dad came home and started practicing saxophone in the front room. When I asked a question, my friend told me to shut up, and that nobody is allowed to make any noise while his dad practiced saxophone. Just as this short conversation was exchanged his dad burst through the door and told us all to shut the f*ck up because whispering really put him off his saxophone playing. His son/my friend started to cry. His dad played for 3 more hours. We just sat in silence because this was before mobile phones and I couldn’t get collected until later that afternoon. I was asked not to tell anyone else at school, but enough people had been and experienced what I had experienced so everyone knew not to disturb this kids dad when he’s playing his saxophone. -halhallelujah: Ummm....this is terrifying.

Never, ever say the following word...

When I was in second grade, I went over to my friend’s house after school, and while her dad made us snacks he asked what we were learning in class. I said we were learning to write our names but because I already knew how to write mine I thought it was a little boring. He bellowed at me WE DO NOT SAY THE WORD BORING IN THIS HOUSEHOLD!!" - lookma_noserotonin What a horrid word! Keep reading for even more crazy house rules.

Anything can be recycled.

I was probably 10 or 11, stayed all night with a new friend for the first time. Her family seemed normal, we had fun. Got up the next morning, they're all 4 in the kitchen at the table eating cereal together. So wholesome. Her mom gets up, prepares a bowl for me, super nice of her. I eat it, then try to be nice in return and pour my leftover milk down the sink. Mom stops me and hands me a partially full gallon jug; 'no need to waste! pour it in the cereal milk jug.' I vividly l recall how nauseated I was when I realized the milk I had just consumed was recycled. Never went back. - rainbowbright87. This is beyond disgusting.

If you're wearing jeans, get off of the sofa.

My friend's mother had a rule about not being allowed to sit on the sofa if you're wearing jeans. - Netherspark. Now that's just ridiculous.

My aunt would only let her family flush once per day because it was 'too noisy'. That's absolutely not okay.

My grandmother forbids red hair from entering her house. If you’re a ginger, you don’t come inside or you wear a hat that hides the hair. - RedHood18. No love for gingers?

Have you earthed today?

My ex’s cousin used to make her husband stand barefoot in the yard for 15 minutes after work. She called it 'earthing'. - kaj_kate. It's healthy to earth. Keep reading for more crazy house rules.

Went to a friends house when I was younger that had some fairly odd rules. You could not walk anywhere in the house without socks on. You couldn't slurp your food (soups), drink through straws or literally make any noises while drinking/eating. Dinners had to be silent, as in no talking whatsoever to prevent talking with food in your mouth. Breakfast was at 6 am. - steoxnyer. This gives me anxiety.

Do not eat in front of anyone.

Never sit on a made bed.