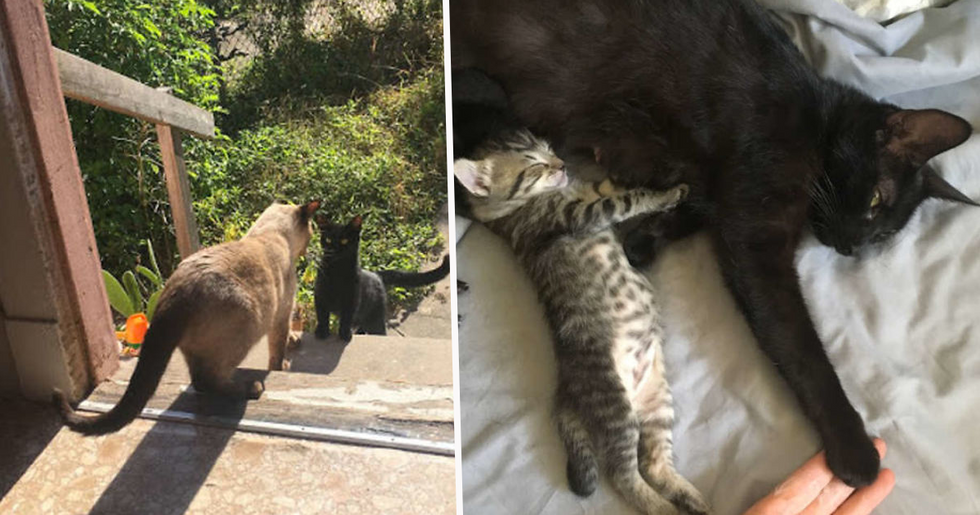 The most heartwarming story has just emerged, and it involves a stray cat about to give birth...

This story will make your day.

And there some stories about them that will make your heart melt.

One of them from Mexico and involves a white tailless cat wandering the streets. The cat is believed to have been living rough for many years now.

Since artist Ida Floreak moved to New Orleans 10 years ago, shes made a lot of friends... Some of more interesting than others.

Last fall, Ida noticed that a stray cat was starting to hang around outside her house.

Already owning a cat herself, she didn't think much of it, just presuming that the two of them must be friends.

Speaking to Bored Panda, Ida said, "[My cat Bruce] is a 7-year-old Siamese, and about twice her size. He’s big and very rude but I love him. Salami does too — he’s the reason she started coming by,"

"I would let him outside for a little while and they would hang out in the backyard together. When he would come back in, she started to follow him. Now they hang out all day, nap together, and groom each other. It’s very sweet."

After seeing the little furry friend so much, Ida decided to name her 'Salami,'

After a while, Ida decided that she would try to take Salami to the vets to get her checked over and vaccinated, but before she could she noticed that Salami was pregnant.

She explained that "One day, Salami started meowing insistently at my door at 5 a.m. I had started feeding her at this point so she knew to come by, but she had never been so insistent and certainly never so early,"

She explained that this was her asking for help: “Salami came inside and just meowed at me for a few hours so I figured something was about to happen; she was so round at that point."

Ida let her in, and only a few hours later she started to have her kittens. Ida provided her with blankets but Salami knew what to do and soon had 4 kittens.

Ida was eventually able to get Salami vaccinated and she now lives with her and Bruce.

She explained, "She’s adjusted really well, and is a very sweet and loving little cat. All of the kittens have gone to friends: one is in Mississippi, and the other three are all in my neighborhood. I’m glad I get to still have a connection with them."