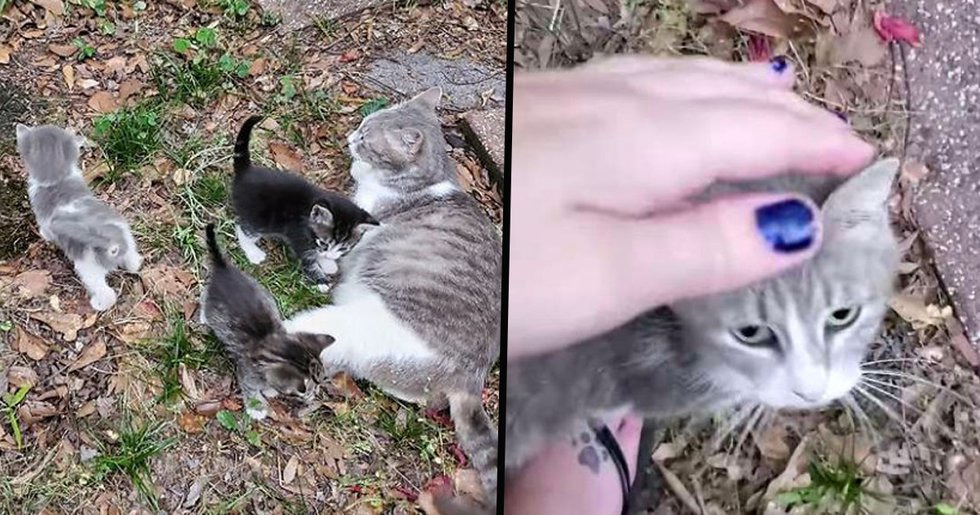 Cats have a mind of their own, they can walk all over you, yet we still love them... they really are masters of manipulation.

However, when a cat comes to you for help, you'd better be prepared to drop everything to lend a hand.

That's exactly what one woman did after she found a stray cat that was eating for 5 little fluffballs!

Keep scrolling for the adorable pictures...

And I know I'm talking to everyone... because who doesn't love cats?

They are the ideal companion.

Not only are they clean and independent animals, but cats are also very affectionate and loving creatures who make great family pets.

And not only are cats clean and healthy...

This especially applies to stray cats.

The first video has come from Mexico and it shows a white tailless cat wandering the streets. The cat is believed to have been living rough for many years now.

Shea Prior had noticed a sweet little cat wandering around near where she lived for a couple of months.

It'll come as no surprise to those of you who own cats, that it took a while for the stray cat to trust her enough to let Shea pet her.

After showing the kitty that she meant her no harm, the cat got close enough for Shea to feed her.

“I was petting her and went to pick her up and that’s when I realized she had milk in and had been nursing some babies," said Shea. She got so excited that she decided to ask the cat to show her the kittens... As you do.

“I started telling her to show me to her babies, and that I bet her babies were so pretty." Shea's reassuring words clearly resonated with mama cat, as the very next day she took Shea to her kittens.

“I was petting her and went to pick her up and that’s when I realized she had milk in and had been nursing some babies," said Shea.

“She came running up to me and rubbed on my leg while making her little croaking noise she does," Shea said. “She led me over to my shed and I looked and saw a couple little fluffballs staring back at me. She flopped over on her side and started calling to them to come out and see me."

At first, the kittens were wary of Shea.

But after they saw her with mom, that all changed. “One of the little gray ones was super brave and came up to me with his little pointy tail held up high in the air and let me pet him immediately," Shea said. “Eventually, after about 10 to 15 minutes, they had all come up to me and let me hold them and pet them."

Shea was desperate to help the little family.

So she decided to take them in. “I will be adopting mama cat to live with me and my other two sweet girlies! All the babies have found homes and will be adopted as soon as mama is ok with it. But for now, everyone is doing great," she said.

Shea started a crowd-funding page to help with “vet bills to get mama spayed, and get babies checked out."

In her Facebook post, she wrote: “I’ve become unemployed due to the coronavirus. I want mama taken care of, but I can’t afford it right now. Anything will help, and if there is anything left after vet bills, the remainder will be donated to my local no-kill animal shelter."

Shea adopted the stray cat and decided to keep 2 of the babies as well.

The others have all been spoken for and will be going to their new forever homes, as soon as the babies are old enough. If you want to help Shea look after these adorable fluffballs, you can donate here. Keep scrolling for pictures of a cat that was born with a permanent Monday face, he looks how we're all feeling right about now...
30%

$17.94 $14.35
Buy Now
See More Deals
We hope you find these deals as awesome as we do! Just an FYI: we may receive a share of sales from links on this page