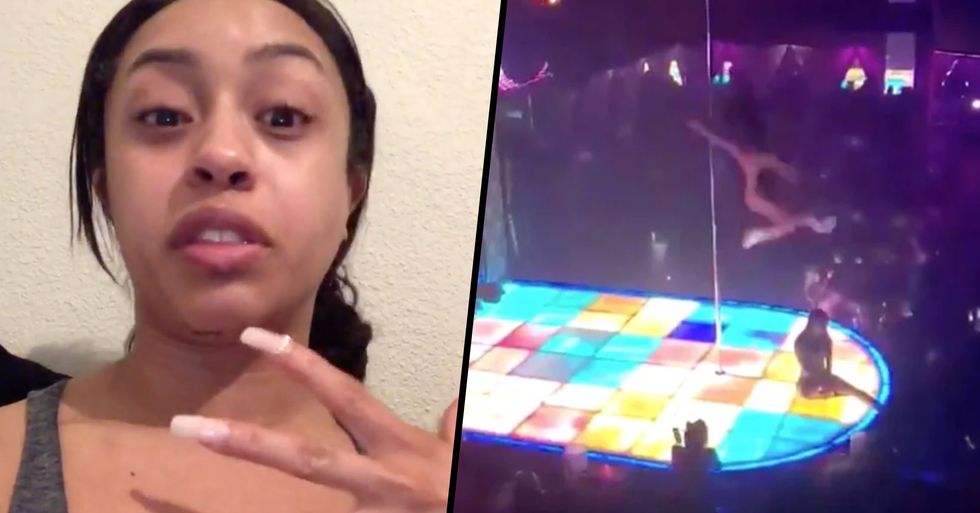 Being a stripper requires a lot of hard work and even more resilience.

It also requires a person to be very strong and fit physically as, for those who have never worked a pole before, it is pretty difficult work.

One stripper has gone viral recently after falling from a 2-story pole and continuing to dance afterward.

But the strip club that she worked for have now claimed that the fall "isn't their problem."

Keep scrolling to learn more about this bizarre story and watch the shocking video...

Whether people agree with it or not...

Stripping is a very popular way for women to earn a decent living.

Stripping appears to be a glamorous profession...

But putting aside the makeup, the expensive underwear, and the dollar bills, stripping is a harsh reality for many.

Not all strippers see their work as a permanent job...

Statistics have found that 1 in 3 strippers are only doing their work to get themselves through college.

A lot of strippers also get into this line of work to start out as dancers.

Let's face it, we all have to start somewhere, don't we?

But stripping is tough work...

Both physically and mentally.

Strippers are more than often judged for their line of work...

And not only are these women sexually objectified, but they are also branded as "cheap" by others who disagree with the idea of stripping for money.

But what people need to remember is...

Strippers do their job out of choice. It pays an awful lot of money, which is exactly what women who are studying or who are taking care of a family sometimes need.

We shouldn't judge others on how they legally earn a living...

And we should encourage their motivation to independently earn their own money.

But alongside the criticisms of stripping comes its risks.

Swinging around on a metal pole with no protective gear can be pretty dangerous, and falling from a height headfirst always ends in disaster.

One stripper recently faced this challenge...

Her name is Genea Sky, and she works regularly at a gentleman's club in the Lone Star State of Texas.

Over the weekend, Genea was doing her usual thing...

The disaster was caught on-camera...

Genea was seen to be straddling a fifteen-foot-high pole when she loses her grip and plummets to the ground.

Genea is seen to lay stunned for a second...

And we couldn't help but notice the woman sat near her who does nothing at all...?!

The crowd was heard gasping, with many asking if she is okay...

But miraculously, Genea slides onto her knees and continues her raunchy performance as if nothing at all had happened.

But despite her valiant efforts in finishing the dance, Genea actually suffered some pretty nasty injuries from her fall.

The dancer took to Instagram to explain the extent of her injuries...

She announced that she'd fractured her jaw, cracked some of her teeth, sprained her ankle... and needed stitches, plus surgery.

And sadly, a lot of people have turned it into one big joke.

Genea was not happy about this reaction...

And she took to Twitter to voice her frustrations, writing, "Yes, I fell off the pole. Yes, I fractured my jaw. NO, I’m not f****** okay. And there’s absolutely NOTHING funny about this situation. This is the worst pain I’ve ever felt and I wouldn’t wish it upon anyone."

She also cleared up the rumors that she was under the influence during her performance...

"I wasn’t f***** up. I do the same tricks every night. I simply messed up this time around and that was the result. The end," she wrote.

Of course, a lot of people have been wondering the same thing...

What has the strip club that Genea works for done about the accident?

According to TMZ, the gentleman's club in Texas is claiming absolutely no responsibility for her fall.

The club is calling it an accident...

And they have absolutely no plans to remove the 15-foot-tall pole following the fall.

The CEO of RCI Hospitality Holdings Inc spoke to TMZ...

Eric Langan, who also owns the gentleman's club, said that the club is looking into helping Genea financially as she is not a full-time worker.

But what Langan did explain was how the dancers choose their own routines...

And these routines come with risks that the dancers must take full responsibility for.

You can watch Genea's fall here...

We wish Genea a very speedy recovery - both mentally and physically - and we sincerely hope people will begin to see the dangerous side behind this profession.