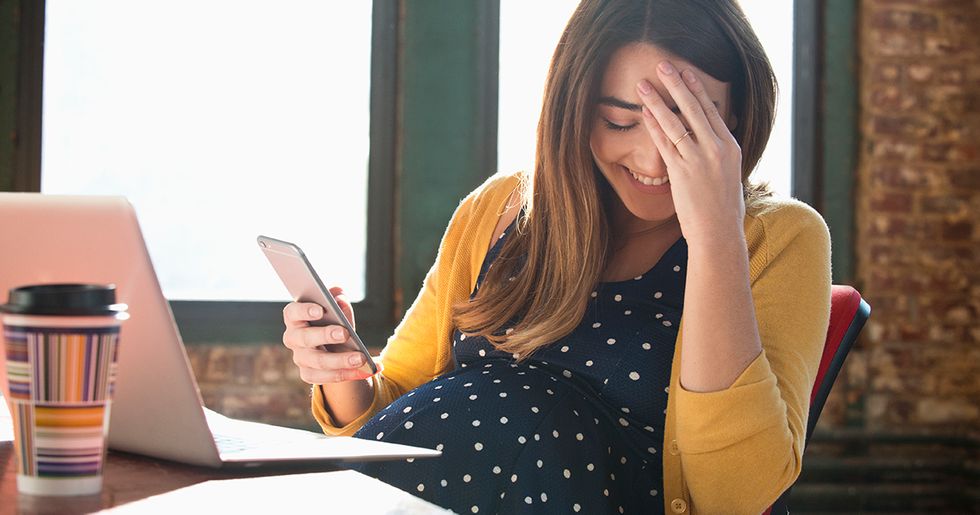 Bringing a new baby into the world is one of the most wonderful things a person can do.

But being pregnant doesn't by any means always feel wonderful.

I mean, we can't all be Beyoncé.

(Obviously. If we could all be Beyoncé...we'd all be Beyoncé, right?) Anyway, having an adorable baby to love and cuddle and snuggle and swaddle might be the best thing in the world, but pregnancy comes with some very specific struggles, too. For instance...

You're most likely going to deal with some Pregnancy Brain.

Like this mama-to-be, who seriously wore two completely different shoes to work. It can happen to you!

At first glance, you might not think this one is quite as bad.

But it's a double whammy: One blue shoe (while the other is black), and TWO left shoes! That's a tough one to come back from.

This pretty much sums it up.

You might have thought you peed a lot before you were pregnant. You had no idea.

This mom isn't exactly thrilled to be in a picture with her husband.

Probably has something to do with the fact that she's in active labor. This next picture features one of the perks of pregnancy. Sort of.

Being pregnant might be inconvenient when it comes to clothes shopping, constant peeing, and TBH pretty much everything else, but at least you get a convenient little table for your froyo!

And you can forget the shoes.

This is why we should all just go everywhere barefoot, right? Babies do it!

It's supposed to say "Estimating." This teacher/preggo lady just had a bit of Pregnancy Brain, that's all.

Ponytail holders are the real MVP.

For those days that you want to wear actual pants (and not the same pair of sweatpants you've been rocking for the past seven days in a row).

This mama-to-be tried her very best.

All she wanted was to paint her toenails. And then she remembered that he had a big ol' belly blocking her from seeing (and reaching) her toes. This next mom is hilarious.

Remember when you could bend over?

Those days are gone. Also, the days where you could laugh without peeing. (Have I mentioned pregnancy involves a lot of peeing?)

All I want is sleep.

It's certainly a cruel joke that you have such a hard time sleeping during the last few weeks of pregnancy. As if you weren't about to lose any semblance of sleep for the next year.

Pregnancy by the numbers:

Yep! 5 days until your due date? Looks like you're right on track!

If there's one thing I know to be true, it's that you do not come between a pregnant woman and her cravings. You just don't.

At least you can blame it on being pregnant! Some people say dumb stuff like this on a regular basis without that excuse! This next mom knows how to be prepared.

You might think you have enough pickles. I'm gonna let you in on a little secret. You do not.

...And the Hallmark commercials. And those beer commercials with that little puppy. And commercials for toilet paper. (Y'all, pregnancy hormones are whack.)

This poor lady's ring gave up the ghost.

Don't even get me started on the nausea.

This is the most brilliant thing I've ever seen. I don't care that it looks a little goofy. This woman is a genius.

What's that word again? It's right on the tip of my toes. This next mom is my personal hero.

First of all, props on saving yourself a little snacky snack for later. That's the kind of forward thinking that we need more of in this world.

I think there's a 3 in there somewhere.

Numbers are hard! Pregnancy is hard! Give yourself a break!

I truly admire your patience in waiting for those PopTarts! You're a queen.

Putting your pants on backward could happen to anyone. Wearing them that way for a half hour? That probably only happens to pregnant people.

Something's not quite right here.

On the bright side, your phone will be refreshingly cool, and you'll definitely get enough calcium today! This next tweet is so real it almost hurts.

I realize there have been several posts about peeing in this list, but I felt that was the only way to communicate just how often pee is a part of the pregnancy equation. It's a lot.

To be fair, this is also how I live my life most days, and I am not pregnant.

Why do people do this?! They need to stop. For real.

Who says you're not having a party? You are! You are the only person who is invited. (And the baby, natch.)

Something tells me that baby's gonna be just fine. Share this with someone who's expecting (and may need something to read while they're spending their whole day peeing)!