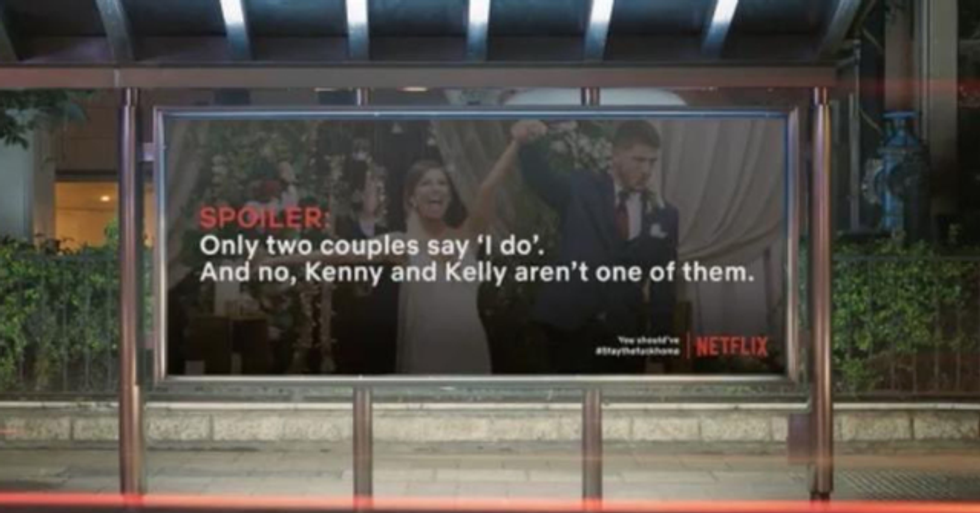 After growing tired of people continuously ignoring quarantine regulations, a pair of advertizing students decided to design Netflix adverts that give away major TV show spoilers.

Keep scrolling to read more about this evil genius, and to see some examples of their finest work...

Amid this devastating COVID-19 pandemic, there is one major rule that people are being asked to abide by...

It couldn't be simpler.

The virus, which has been spreading across the globe at an alarming rate, is caught primarily through human contact, such as hand-shaking, coughing and sneezing, and kissing.

So, in a last-ditch attempt to halt the spread of the potentially deadly virus...

World leaders all across the globe have imposed lockdowns upon their countries.

Millions of people now remain isolated within their homes...

With strict regulations in place as to when and for how long they can go outdoors.

Twenty-three different states have issued stay-at-home orders, asking residents to stay put and go out only for essential services like buying food and medicine.

Over the weekend, President Trump extended these orders even further.

Federal guidelines on social distancing have been prolonged until April 30th, as the President warned that the coronavirus "could reach as many as 200,000 in the US" if the lockdown isn't extended.

Things are getting serious.

So now, more than ever, it is of the utmost importance to listen to our government's advice and stay at home.

Yet, despite these new lockdown regulations in place across the vast majority of our country...

Many people are having a rather difficult time actually staying at home.

There are still so many people going about their day-to-day lives as though nothing has changed.

Instead of quarantining, numerous people have been spotted gathering with friends and socializing as they would do without a pandemic tearing across the globe.

We all heard about the Spring Breakers in Florida...

Earlier this month, people were horrified to see footage of beaches in Miami packed out with excitable party-goers, all happily ignoring the stay-at-home orders recently imposed by the government.

And even today, more and more stories of people simply ignoring these regulations have been circulating on the internet...

So a pair of advertizing students decided to do something about it.

These students envisioned a rather catastrophic advertising ploy that could keep people firmly inside their homes...

Spoiling the endings of their favorite Netflix shows.

It's evil genius, isn't it?

The fake adverts were created by Seine Kongruangkit and Matithorn Prachuabmoh Chaimoungkalo, known as Brave, of the Miami Ad School Europe in Hamburg, Germany, according to Forbes.

The students are originally from Thailand...

And they were inspired after noticing, upon returning to their home country, that the Thai government hadn't effectively stressed the dangers of the pandemic to the public.

So they decided to get creative.

“The best way to stop the spread of Covid-19 is to #staythef***home, but some people still think it’s okay to go out and chill, spoiling it for us all," the spec ad reads. “So we took an extreme measure: we spoil their favorite Netflix shows." Here are some examples of their finest work...

If ruining the ending of Stranger Things isn't enough to keep people at home, I don't know what is.

And if you still haven't watched the 4th season of Stranger Things... I'm so sorry.

The students photoshopped the idea into real-life scenarios...

In an attempt to finally scare people from leaving their homes.

Some of the spoilers were total savagery...

They didn't hold back, even with the final episode of Love is Blind, which is bound to ruffle plenty of feathers.

And, their campaign was pulled off so expertly...

People believed that Netflix had actually commissioned the adverts themselves. “Don't get me wrong, we knew it's a beautiful idea from the start and that it should at least get a chance to be presented to an agency or best, the client, but our goal was to help create a piece of communication that could really make a change," Chaimoungkalo explained, who didn’t expect the project to be so successful.

But many poor souls found their favorite shows being ruined for them...

Even though they have remained safely quarantined in their homes. Now that's true heartbreak. If you're currently self-isolating and want to start a series that hasn't been spoiled for you, keep scrolling to see the best TV shows and movies to binge on Netflix...