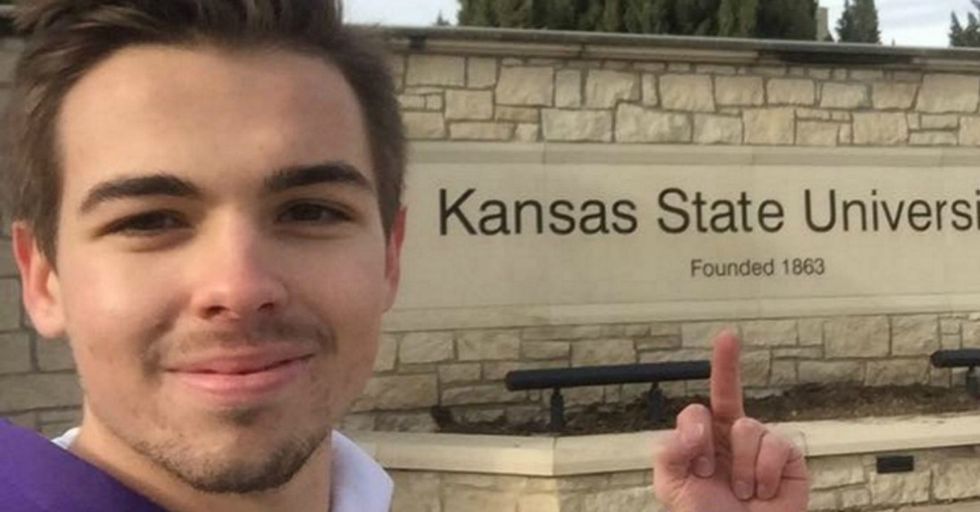 Student Gets 4.0 Then Drops Out of College With Epic Facebook Rant

If you're currently crushed under the weight of student debt, then Billy Wilson is going to become the hero you so desperately need (although no, he can't pay off your student debt. You're screwed there.).

What is it about a good "mic drop" story that's so universally loved?

There must be some sort of fantasy in all of us that requires us storming out of a room with the last word, never to be heard from again. The phrase "mic drop" is relatively new, but the sentiment behind it definitely isn't.

The moment is made even more poignant when the person saying "peace out" has clearly earned the right to do so.

Naturally, it's a little less impactful when it's someone who's just storming off in a huff versus someone who's actually accomplished a great deal. Either way, though, it's fun to watch, even if the latter scenario is more satisfying.

One freshman at Kansas State University did just that.

His name is Billy Wilson, and his big send-off after less than a year at school didn't come because it kicked his butt or because he couldn't hack it. That fact makes his story and "mic drop" departure from higher education even more fun for those of us on the outside looking in.

Wilson had a perfect 4.0 average after one semester at Kansas State University and then promptly dropped out with a pretty clear message — F*ck college.

Calling it "one of the best choices I've ever made," he took to Facebook to launch a manifesto of sorts that made some pretty strong points about why college is a waste of money and time. On the other hand, most jobs require a degree and you don't really want a doctor sticking things in your body if they only stayed at a Holiday Inn Express last night.

You should be. It's clear from Wilson's eloquent "smell ya later" that this wasn't a fit of rage or an overwhelmed student getting defensive. Rather it's just the result of a well-reasoned thought process that more students could probably stand to learn from.

At any rate, it went viral with more than 10,700 shares and 7,500 comments from people on both side of the educational fence.

There were those who could totally relate and are probably flipping the bird to their university as we speak.

And those on the other side of the argument.

Plus, they offered up some advice.

In the end, you have to do what works for you. College is insanely expensive and costs are rising every year, but the requirements for jobs that let you make a living often demand it. What are your thoughts on this?

Rightly or wrongly, we've all had a desire to storm out of a situation we don't like.

While you can do that any time you please, the truth is that it's gotta be a lot more rewarding when you've got righteousness on your side. Be like Billy. Well, don't necessarily quit school, but work hard enough that if you DO quit something, it won't be because you failed at it.