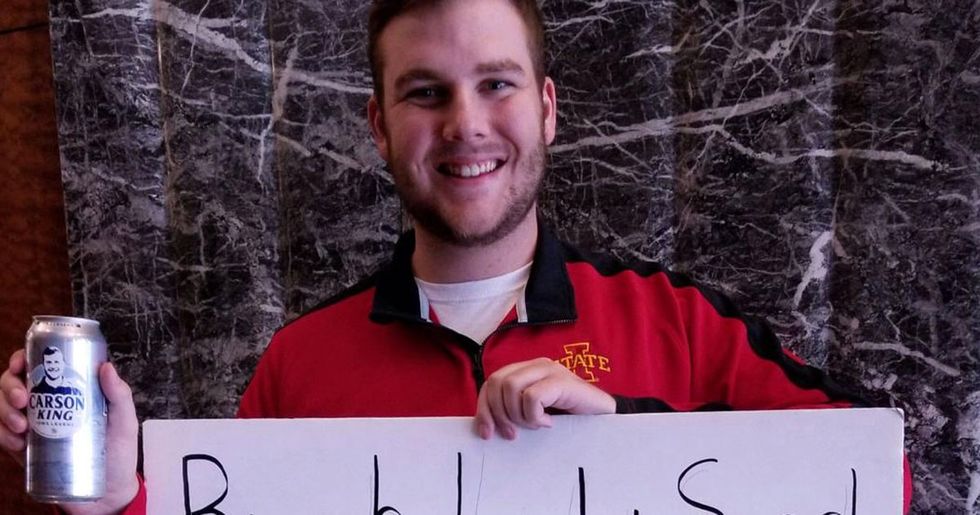 Student Raises $1 Million For Charity, Journalist Digs Up His Old Tweets to Destroy Him

When Iowa State Student, Carson King, went to a football game with a comical sign under his arm, he had no idea that his life was about to change. In fact, I think it's safe to say that King's life will never be the same again.

What unraveled to be a story with great highs and even greater lows saw Carson King be crowned a hero and then a villain. The press really did have a field day with this guy.

Continue scrolling to learn all about this epic story. Seriously, it has as many twists and turns as an Agatha Christie novel.

In a classic student move...

Carson tried to get himself some free beer. Whilst at a football game, King brought along a sign that requested people used the mobile payment app "Venmo" to donate to his beer cause. There's no way that the student could have predicted the amount of money he was going to make.

Carson King was just after a couple of six-packs.

The twenty-four-year-old student was only looking to see if he could wangle himself a couple of beers. What actually happened was that Carson's sign made it on to TV and thousands of people responded to the request. Overnight, the beer fund had reached an extraordinary total...

Once the total had reached $28,000, King announced that he would donate it all.

I mean, there are plenty of students out there that would have kept the money. That kind of dough could have certainly helped toward his college fees - heck, it could have also bought him a lifetime's supply of beer.

After Busch Beer learned about King's selfless act, they decided to chip in.

Carlson King decided that he would donate any money raised to a children's hospital. After he thanked all of his donators and announced that any money raised would go to a children's hospital, the student's beer fund continued to grow at rapid speed. Busch beer announced that they would match any total King raised, and the people at Venmo also said that they would contribute to the final total, too.

Almost overnight, the student was raising hundreds of thousands of dollars for charity.

Day after day, the beer fund grew to extraordinary heights. Carson, with the endorsement of Busch Beer, even had a beer made with his face on it! The student's face was all over the internet.

Then it all came crashing down.

The saddest thing about this is there was no political spin to Carson King. It was literally just a story about a g… https://t.co/0D7ebFJhLb
— Greg Price (@Greg Price)1569385329.0

After Carson had succeeded in making a whopping $1 million dollars for his cause, things soured. A journalist for Des Moines Register, Aaron Calvin, decided to do some digging into Carson King's past.

Now we've all written stupid stuff on the internet...

For those unfortunate enough to have been a teenager during the dawn of social media, we've all got skeletons. Whether you got into petty arguments with someone from school on your Facebook wall, or you retweeted cringy posts on Twitter... everyone made mistakes in the early days of the internet.

Some people go through the laborious process of deleting their internet past.

If you're a paranoid Polly or a member of Congress, you might delete all of your cringy posts. Posts don't only get deleted for being embarrassing. Sometimes, we did or said something in our past that could result in the defamation of our character in the present. Unless you're the president, of course, he gets away with anything. From posting racist, misogynistic tweets, to bullying Kristen Stewart... no one seems to care.

Aaron Calvin made out in his "expose" that King was the worst.

In his Des Moines Register piece about the fundraiser, Calvin explained that he had carried out a "routine background check of King’s social media." As you do... He revealed that what he found deeply disturbed him. In his report, he wrote that he discovered "two racist jokes, one comparing black mothers to gorillas and another making light of black people killed in the Holocaust." What he fails to mention is that these tweets dated back to when King was a sixteen-year-old high school student.

Calvin also failed to mention the context behind the tweets...

I think it's worth mentioning that the racist tweets were not jokes made up by King. He was actually quoting from a popular comedy show called Tosh.0.  The show was pretty big in 2012 and it's no surprise that a sixteen-year-old boy was quoting it online.

Carson King was ashamed of the tweets and deleted them.

Carson issued a public apology and even thanked the Des Monde Register reporter for making him aware of the old tweets. I mean, you can't say fairer than that, right?

Busch Beer dropped King as quick as they'd snapped him up.

Such is fame, as soon as Carson King's name was soured, his sponsors didn't want anything to do with him. Aaron Calvin's "expose" had completely ruined King's good name. But you know the wise old saying: "whoever smelt it dealt it?"

After Calvin's public slaying of Carson King, people decided that they ought to give the journalist a taste of his own medicine. Going through some of Aaron Calvin's old tweets revealed that he was way worse! In fact, Calvin's now-deleted tweets reveal him to be a pretty awful character.

Is this not racist, Calvin?

It's amazing how so many people live in glass houses.

I don't think that many gay men would like to speak to you, Mr. Calvin.

He did issue a public apology...

But I mean... come on. After dragging a genuinely nice guy's name through the mud, it turns out that your Twitter past is way worse and that's all you can say?

Des Monde Register issued a statement regarding the King scandal.

The newspaper justified their motives for ruining Carson King's public image. They made out as though it was a difficult decision but that truth ought to prevail etc...

What, so no big expose of Aaron Calvin?

In regards to their reporter, Aaron Calvin, the newspaper also released a statement. They didn't say very much. Only that they planned to "investigate" reports. Huh, figures.

Why always look for the bad?

I completely agree with the journalist, Jodi Long, on this one. Why can't we just have a good story for once? Why couldn't the tale of some dude who asked for free beer money and ended up raising a million dollars for charity have ended there? Wouldn't it be nice to have some good news for a change? Speaking of good news, you better believe I've found some. Continue scrolling to read all about the woman that quit her job to find her missing dog. Wait until you watch the video of them reuniting...