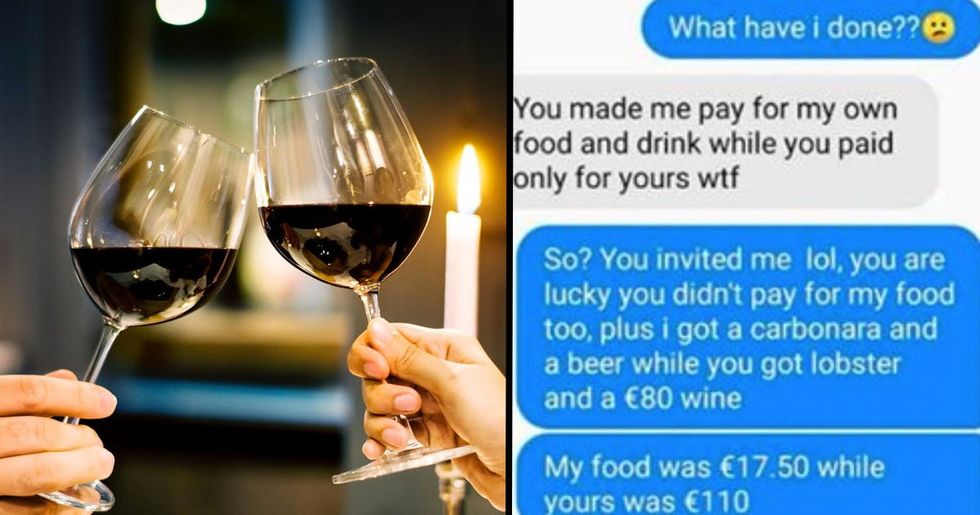 When it comes to the subject of dating, there are a few red flags that can sometimes pop up on a first outing. Maybe their information doesn’t match their profile, maybe they don’t look as good as they did in their pics, but most of the time stuff like this can be overlooked – after all, it’s only one date. But there is one thing that often leads to controversy and debate, especially when placed into a dating context. I am of course referring to ‘paying the bill’. How will you do it? Is okay for one party to pay for the whole thing, or should the power balance be equal? Something a Reddit user recently questioned when he went on, what he probably now considers to be, the worst date of his life.

Dates can be awkward. Especially first ones.

Not only do you have to meet a relative stranger, but you also have to spend at least 2 hours with them.

I guess you can chat, learn about each other’s hobbies and interests.

If you have any in common…

If not, then I guess the next couple of hours are going to be pretty silent.

But sometimes, you can hit it off.

And that afternoon activity soon becomes one of the best evenings in your life.

But even the most perfect date can go sour.

However, there is often one things that leads to confrontation between yourself and your possible future partner.

Imagine it, you’ve just finished a beautiful meal, full three courses with extra bread on the side, and the waiter brings over the bill.

And your date expects you to pay!

You sigh and pull out your wallet, waiting for your date to do the same, before you realise that they probably didn’t even bring any money.

And poof goes that romance.

And in one fatal swoop, the date has turned into a free meal for them and a burning hole in your pocket.

I’ve always been a ‘let’s split it’ kinda guy, but maybe that idea is still a bit too modern.

Or at least it was for one woman.

Reddit user ‘CuteBananaMuffin’ recently created a post, where he shared text messages sent between him and his date.

He called the post ‘Well…there goes the friendship with her.’

But why? Well it probably stems from what she said.

And it wasn’t pretty.

In the messages, CuteBananaMuffin asked his date from the other night if she would like to meet again – the dreaded question that we must all ask our dates at the end of the night.

But her response was shocking.

His date replied that she did not want to meet again because of CuteBananaMuffin’s actions on the date.

Of course, he was confused…

CuteBananaMuffin was confused by this statement and asked the young woman what he had done.

His date revealed that she was furious that he didn’t pay for her meal.

CuteBananaMuffin had this to say.

In response, CuteBananaMuffin stated that the date had initially been her idea and that he had only ordered a cheap and simple meal.

Guess what she ordered….

While his date had ordered the lobster and a $90 bottle of wine! No, I’m not joking. She actually did that.

So you can see why he had reservations about paying.

CuteBananaMuffin went on to say that his date’s meal came to an overall $110! And that, as a student, he had was not comfortable paying that much for a meal. If he even could!

His date was not happy about this.

His date responded negatively to this response. Saying that she was never going on a date with him again and that a gentlemen should always pay for the woman’s meal. #feminism, am I right?

Oh…but he had some more ammunition.

CuteBananaMuffin stated that he was a gentleman because he actually stayed on the date after she began talking about another guy she obviously was into.

Going on a date with someone who is still hung up on an ex or a crush is never fun, because you can never compare.

But he decided to soldier on.

But he continued with the date, at the end of the day it's just a meal.

But then his date said some rude things.

In the text messages, his date eventually gets violent with her language and accuses CuteBananaMuffin of just wanting to have sex with her. His response is quick but maybe in poor taste. Who can blame him though, he must have been furious.

Of course the topic has led to a lot of discussion.

Since the thread was opened, Reddit users have been sharing their disbelief at the woman’s actions.

Some knew her game well.

This Reddit user got it in one when they stated that the woman was just looking for a free meal.

Some called the girl lazy.

Others accused the girl of being lazy and entitled.

And, of course, some questioned the story’s authenticity.

I have no idea why someone would make this up, but there’s always disbelievers.

But no matter what, the story is pretty entertaining.

I’m sure I am not the only one to get a laugh out of it.

Here’s to any future dates CuteBananaMuffin.