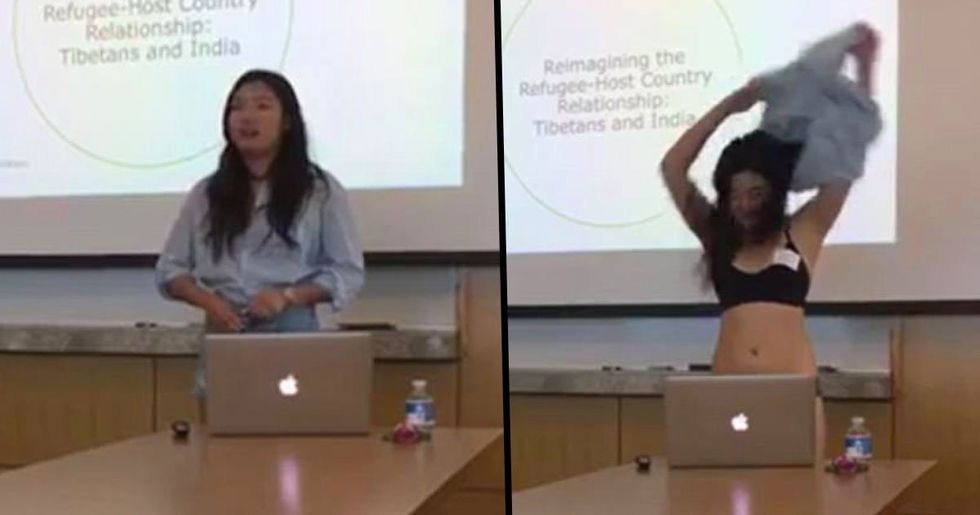 I thought that we were finally over trying to define women by the clothes that they wear? I guess not.

But this student had the perfect answer to "rebel" against her university professor who made "inappropriate" comments about her shorts. I mean, personally, I wouldn't have the confidence to take off my clothes in front of my classmates, just to stage a protest, but you go, girl!

Keep scrolling for the full story as well as a video of the student presenting her thesis... in her underwear.

You'd think that people would have gotten over trying to tell women what to wear...

But it just hasn't happened yet. I thought we were over trying to define women by their clothes, but these particular people have managed to prove me wrong.

And they're always justifying themselves with the same lame excuses.

"You're distracting men." Listen, if you're a man and you're distracted by shoulders or ankles, then, first of all, your love life must be dry as hell, and, second of all, avert your gaze if you just can't help yourself.

Do you remember when a young woman was threatened to be kicked off a flight if she didn't "cover up?"

Thomas Cook airlines refused to let Emily O'Connor board a flight to Tenerife if she didn't make herself look "more appropriate" before departure.

And you wouldn't believe what she was wearing...

A crop top and high waisted trousers. A simple and comfy outfit for a three-hour flight. In no way could I see a problem with her clothing. There were no slogans, no inappropriate exposure, nothing that could harm anyone else.

But, apparently, her shoulders were "causing offense" to other passengers.

However, when O'Connor confronted the passengers on the plane by asking them if they had a problem with her outfit, no one uttered a word.

It seemed as if the flight attendant was the one that had the biggest problem.

They threatened to remove her from the flight if she didn't put a jacket on. They even stood idly by as another man hurled abuse at her for "delaying the flight" screaming: "just put a f*cking jacket on."

O'Connor was eventually given a jacket by her cousin after they announced that the "issue" over the tannoy...

And as anyone would be, she was left feeling attacked. Definitely not the best way to start a vacation.

That's just one of the many stories that occur on a daily basis.

Many schools all around the United States have implemented dress codes that mainly target females. I mean, you would think that these girls are coming in wearing fishnet leotards or thigh-high latex boots...

But it usually regards shorts or tank tops...

Sometimes, there is no choice but to follow the rules, but this one girl decided that she was going to stand against them.

Letitia Chai is a senior student at Cornell University.

While presenting her thesis to an entire class of students, she decided that she would strip down to nothing but her undergarments in order to stage a protest against "inappropriate" comments made by the professor.

Just before Chai was about to start her presentation, the teacher chimed in...

Rebekah Maggor questioned Chai on her choice of attire, claiming that her shorts were "inappropriate" for the lesson. The student took to Facebook to tell her side of the story.

"The first thing that the professor said to me was 'is that really what you would wear?' She, a white woman, continued: 'Your shorts are too short.'" "A white woman"... while I do believe that, if someone feels discriminated, they should speak out about it, I don't think that race is the key issue here.

The rest of her post addressed the reasons that the professor decided to call her out:

"The professor proceeded to tell me, in front of my whole class, that I was inviting the male gaze away from the content of my presentation and onto my body." This is the problem.

Why on Earth should a woman change the way that she is dressed because a man can't control himself?

It's genuinely disgusting. It would be more understandable if the reason was something along the lines of: "You're giving a presentation and that's not an appropriate outfit for a professional setting." But no. It's the lame-ass excuse of "the male gaze."

"She said I was making a statement by wearing my outfit."

The professor even went as far as to ask her what her mom would think if she saw the shorts she was wearing. But Chai revealed that her mother was a "feminist, gender, sexuality professor," so she would be cool with it.

As with every story though, there are always two sides.

While it seems that Chai saw this as a direct act of discrimination towards her, another classmate let the world know that Maggor’s comments had an "error in phrasing."

Apparently, her point was supposed to highlight "the importance of professionalism in certain public speaking situations."

That seems more justifiable, but even the mention of the "male gaze" is enough to discredit that completely.

The other student also said that the professor did apologize for her initial comments.

She quickly jumped ship upon realizing that her comments could be misconstrued as something problematic, which they were. The professor decided to refine them by expressing how the notion of "short-shorts" carries "a lot of cultural and political baggage."

And the internet seemed completely divided over the issue too...

While some praised Chai for her actions, others called her an "attention-seeker."

I mean, I give the girl props for doing what she thought was right. Have a look for yourselves:

She stood up for herself by not allowing her clothing to diminish her down to only a sex symbol targeted by "the male gaze." However, maybe next time, just tell the teacher to stop interrupting your presentation and be done with it? If you want to see another strong woman shut down a bunch of body-shamers, then keep scrolling. Her inspiring response really made people think twice before commenting again.