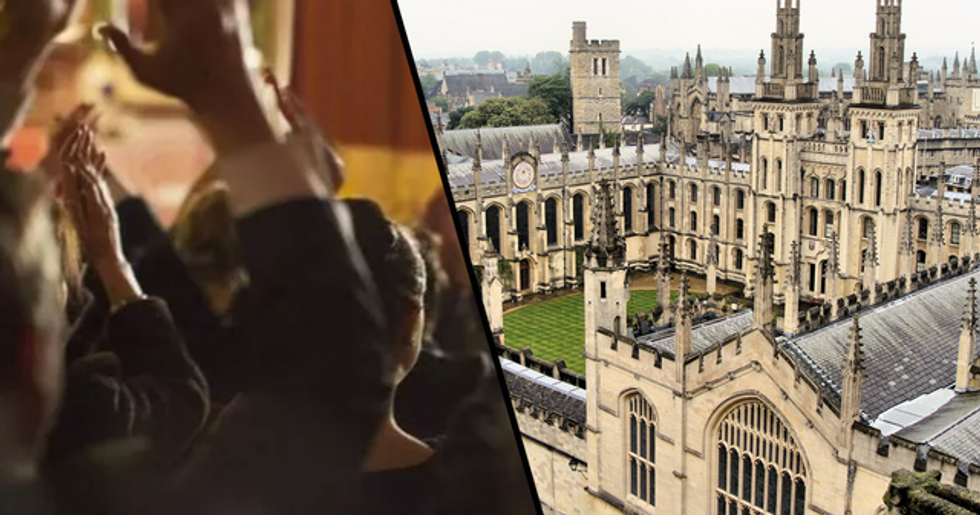 Nowadays, people are triggered by pretty much anything. Song lyrics, what women wear, pronouns... In 2019, there isn't a lot out there that doesn't offend or trigger at least one group of people.

And the latest thing that has been added to the list is clapping. Yes, as in a round of applause.

Oxford University, one of the most prestigious and highly-respected institutions in the world, has brought in a new rule which completely bans clapping at public events and ceremonies and replaces it with "silent jazz hands" instead. And the reason? They believe a round of applause can induce anxiety in some students.

Quite understandably, the news broke and people have completely ridiculed the idea. Keep scrolling for the full story...

Clapping has officially been banned at Oxford University.

Yes, one of the most prestigious educational institutions in the world has voted to ban the good, old fashioned round of applause.

Why on earth would a university ban one of the most traditional forms of praise?

But, apparently, not everyone sees it this way.

Despite the act of applaud being a time-honored custom signaling approval, acclamation and enthusiasm, some students have insisted that a round of applause actually does them a lot more harm than good.

Students at the University of Oxford have voted to place a full ban on clapping...

And will instead adopt "silent jazz hands" instead of the usual wave of applause, amid fears that a regular round of applause could induce anxiety attacks in some students.

Jazz hands. Instead of applauding. Welcome to 2019, everyone!

The university passed the move to replace clapping with jazz hands this week at a Student Council meeting.

“Jazz hands", the movement that involves waving both hands by the sides of the body at about shoulder height, is the British Sign Language expression for applause.

The university has defended their controversial decision.

Officers at the student union argued that clapping, whooping and other loud noises presented an “access issue" for some disabled students who have “anxiety disorders, sensory sensitivity and those who use hearing aids."

The move is the university's attempt to accommodate to the needs of others.

Roisin McCallion, welfare and equal opportunity officer of the Oxford University Student Union, proposed the motion to make the union’s democratic events “more accessible and inclusive for all, including people who suffer from anxiety," she said.

But many people have been quick to ridicule the idea.

@thetimes As someone who suffers from a (sometimes debilitating) anxiety disorder, this will do NOTHING but make pe… https://t.co/ORBfZKqNtB
— Ben 🇬🇧 (@Ben 🇬🇧)1571998269.0

And even those who suffer from anxiety disorders themselves have dubbed the move as completely ridiculous.

And the thought of a room full of "silent jazz hands" induces anxiety in itself...

Okay, this guy has made a very valid point.

The move has made people question the credibility of such a highly-respected institution...

Maybe Hogwarts is the best option after all?

And, never one to miss out on the fun...

British TV host, Piers Morgan, had his say on the matter... By completely tearing it to shreds. Standard.

But, remarkably, Oxford isn't the first to introduce the rule.

Last year, another the University of Manchester completely banned clapping and any other form of audible form of appreciation at its events.

And the National Union of Students (NUS) has been encouraging the use of jazz hands instead of clapping since 2015.

Visitors to its women’s conference that year asked delegates to stop clapping and use gestures instead as the noise was “triggering anxiety". It also added, “Please be mindful."

So proud of Oxford University Student Union for banning applause. With any luck, all forms of audible communicatio… https://t.co/QdT4np6Kn2
— Titania McGrath (@Titania McGrath)1571960369.0

Total silence? A ban on crowds? A ban on speaking altogether? In today's day in age, who knows.