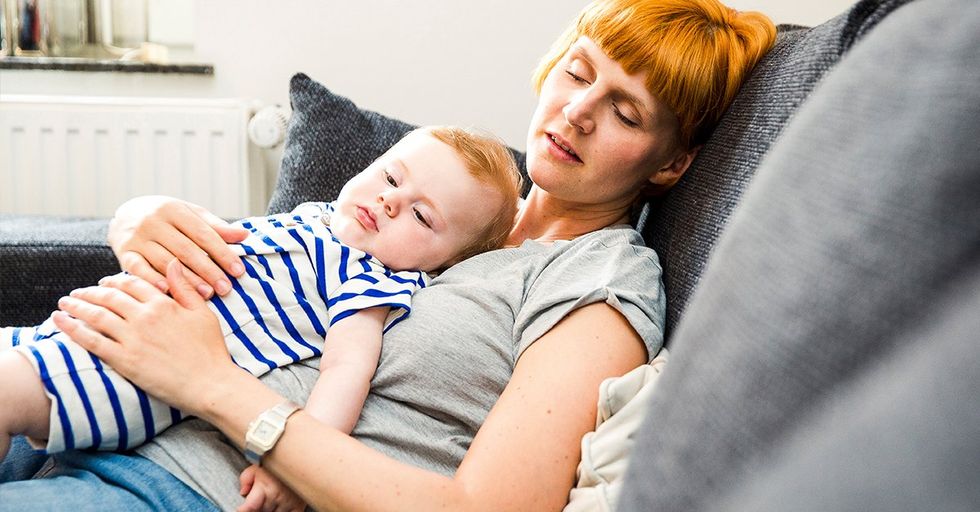 Study Says Moms of Three Kids Are the Most Stressed

There's no surprise to find out that being a mom is incredibly stressful. Every mom, no matter how they choose to parent, has one of the hardest jobs in the world. If you're a stay at home mom or a working mom, you cannot fight off the impending worry that comes with taking care of children.

Until you have kids of your own, it's hard to fully understand the stress that mothers go through. Go ahead and ask your own mother and I'm sure they can go through an extensive list of all the things that caused them stress when they were raising you.

There is a magic number of children that causes the most stress for moms, and by magic, I mean devastatingly common. For mothers who have three kids, their lives are significantly more stressful than those families that have less or more. If you know any moms with three kids, go give them a hug.

Motherhood is so special.

Moms are some of the toughest people in this world. They have been through more than most of us and they keep going like it's no big deal.

There are so many perks to it.

Creating life is a pretty big deal and there are so many sweet moments mothers share with their children. It's unlike any other bond in the world.

For those of you who are close to your mom, you know how wise, loving and kind moms can be and how awful your life would be without them.

Where would be without moms?

I know I'd still be struggling to make dentist appointments without the help of my mom.

Not to be dramatic but being a mom is very hard.

Moms – and I cannot stress this enough – have a really difficult job. Saying they have the toughest job in the world may be the biggest understatement of the history of life.

Their strength is truly amazing.

Some moms run off of pure love for their children, but most run off of strong coffee and stronger wine.

On a scale of one to mom, how stressed are you?

There's being stressed, and then there's being a mother. It's a whole new level of stress to care for someone who literally relies on you for survival.

It's a full-time, stress soaked lifestyle.

No matter how many kids you have, it's going to be a little tough. But a recent study has found that having three kids is the peak of stress for a mother.

If you are in a family that has three kids just know that your mother has survived the most stressful experience ever.

Three is a big commitment.

TODAY Parents conducted a survey with over 7,000 mothers and the results were pretty interesting and gave us a much more empathetic heart for all the moms of three out there.

What makes three so hard?

Having one kid is hard enough and having more than three sounds nearly impossible, but there's something about having three kids that almost maxes out a moms stress level.

Critical mass is a good thing.

"Mothers of three children stress more than moms of one or two, while mothers of four or more children actually report lower stress levels," TODAY reported after studying the results of their survey. "Once you get a certain critical mass of kids, life seems to get a bit easier."

You are tremendously outnumbered.

Three kids bring about a whole new batch of trials because you can no longer have one kid in each arm and splitting a cookie three ways is way more complicated than just breaking it in half.

Moms are getting honest.

Jill Smokler, creator of mommy blog ScaryMommy.com and author of Motherhood Comes Naturally (And Other Vicious Lies) agrees that after she had her third kid, she felt a whole new level of stress.

You've only got two hands!

“Going from one to two was an easy, breezy transition," said Smokler about what it was like adding one more to the mix. “Two to three, everything was turned upside down. I did not feel like I had it together...just crossing the street and not being able to physically hold all their hands I found tremendously stressful."

Yes, it gets easier, but it also gets harder.

After the first kid, you feel a lot more confident in your parenting skills. Dr. Janet Taylor, a psychiatrist, and mother, believes her confidence grew as she had more kids. “The more children you have, the more confident you become in your parenting abilities," Dr. Taylor said. “You have to let go… and then you’re just thankful when they all get to school on time."

The results of this made Dr. Taylor laugh.

A mother of four, Dr. Taylor literally LOLed when she heard that mothers of three are the most stressed moms because she totally agrees. With three kids, you still feel like you might be able to be the perfect parent, but Dr. Taylor believes “There’s just not enough space in your head for perfectionism when you get to four or more kids."

After three kids, you're just thankful if they make it through the day.

You still care, but just not as much.

“It just gets to be survival!" Dr. Taylor laughed when recalling that after her first kid, she gave up on obsessively putting safety plugs on every outlet.

You can't protect your kids from everything!

A little shock for your little one can't be that bad. I'm sure they'll be fine, as long as they have a snack ready for them.

With two kids, you can carry one in each arm. With four kids, they can pair up, making it easier to keep track of them. But three kids just throws everything off.

Four kids makes quite a team.

Mom Karen Flynn said having four kids is easier than having three, sharing that a big advantage is that they each have a "built-in playmate...they tended to pair up so no one felt left out."

How do moms make it work?

On a scale of 1-10, the survey found that the average mom put herself at an 8.5 on the stress level, 10 being the highest.

Some other slightly stressful numbers.

The study also revealed a lot of other stress factors that moms experience which just makes me respect all mothers even more.

It's not just the kids that cause stress.

The TODAY survey concluded that 46% of moms say their partners cause them more stress than their kids do.

Partners better step up their game.

Being a mom is already hard enough, but figuring out how to be a great wife is an entirely different struggle. If the partner is not willing to invest in the kids as much as moms are, it makes life a whole lot harder.

Moms are stressed about being stressed.

The survey also found that 72% of moms stress about how stressed they are, which is relatable AF.

Just thinking about my to-do list stresses me out, I can't imagine adding in three other humans to take care of. Moms stress about just being a mom which is very understandable.

There are so many factors that go into being a mom, and almost everything can cause stress, but what's the biggest cause of it all? 60% of moms say it’s lack of time; they feel like they can't accomplish everything they need to do in one day.

There just isn't enough hours in the day.

From the time they wake up to the time they get to sleep, it feels like there still isn't enough time to do all the things they needed to do. A lot of moms often feel behind, like they can never get caught up with life before something else comes up.

Daughters can also weigh heavy on the stress list.

Moms who have girls say that it's more stressful than raising boys. 60% of moms say that raising daughters can be harder than if they were to only have sons.

Girls are a little more complicated.

Raising little women can have difficulties of their own. PMSing and puberty can sometimes feel like an impossible feat.

9 out of 10 moms stress about their physical appearance. They still want to feel fit and attractive, but sometimes it can be hard to keep up with their own image when they are taking care of one hundred other things.

If you've got it, flaunt it.

Moms who embrace their body, stretch marks and all, are some real beauty icons. Going through childbirth changes your body so much and learning to love the strength of your body as a mother is a beautiful thing.

Moms are really hard on themselves.

With mom-shaming, "perfect" mommy bloggers and unrealistic expectations, some moms feel like they aren't the perfect mother and often compare themselves with other moms.

But in reality, a lot of moms are totally crushing it.

There is no such thing as a perfect mom; every mother has their own gifts and the ways that they love their kids.

Whether you're a mom of 3 or a mom of 8, just know that you're doing a great job.

To all the moms out there, you really are doing a great job, no matter if you feel like a train wreck.

Hats off to you, moms!

All moms are superheroes, no matter how many kids they have. Share this article with a mom you love!